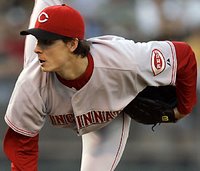 It took less than 24-hours for Reds pitcher Homer Bailey to make his season debut and be sent back down again. Bailey, who was 3-5 with with a 4.57 ERA in eight starts at Triple-A Louisville, shows signs of a good pitcher, but needs to command the ball much better than he has been. He is only 23 years old, so I wouldn't be surprised if his breakout came in 2010. Sorry, Reds fans.
Infielder-outfielder Wilkin Castillo will take his spot on the roster.