Share All sharing options for: Rockies Could Trade Cook 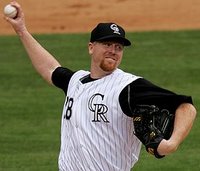 Rockies ace Aaron Cook is off to a disappointing start since winning 16 games in 2008. He is 3-2 with a 4.82 ERA in 10 starts, including a complete game shutout. Cook is a solid pitcher, but is playing for a struggling ball club in a hitters heaven. Cook has two years and 18.25 million dollars on his contract, with a mutual option for 2012. The Rockies have several strong young pitchers in the minor league system, and it should only get better after June's amateur draft.

While there is talk that Erik Bedard will be traded, Mariners GM Jack Zduriencik has not said they are going to move him. Peavy is expected to be made available, but his price could take a hit if his ankle injury does not heal. Cook will cost a couple prospects, but nothing like Peavy or Bedard. The Phillies would be smart to ask about Cook has only pitched once at Citizens Bank Ballpark, but is 1-0 with a 2.57 ERA in seven innings.