Soriano to Second Base?

Share All sharing options for: Soriano to Second Base? 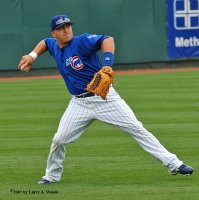 With current Cubs second baseman Mike Fontenot struggling at the plate, manager Lou Piniella has considered moving Alfonso Soriano to second and putting Micah Hoffpauir in the left field. Hoffpauir has been platooning between right field and first base, offering days off to both Milton Bradley and Derrek Lee. He is hitting .314 with 4 home runs in 70 at-bats for the Cubs this season, and the role he is in now may be best for the Cubs.

I still think Mike Fontenot can make adjustments and be an everyday player. It wouldn't look good for Jim Hendry if the Cubs released Ryan Freel, but they probably should. It does not make sense to have Aaron Miles, Mike Fontenot, and Ryan Freel on the same team. They are the same type of player and Freel's spot could go to someone who could be more productive. In fact, the Cubs could move Alfonso Soriano to second base and call up prospect Jake Fox, who is hitting .425 with 17 home runs with a .506 on-base percentage in just 117 at-bats at Triple-A Iowa.