Share All sharing options for: Thoughts on Yankees/Red Sox Game 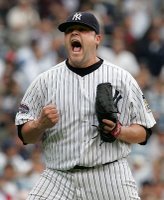 Thanks to the MLB Network, I was able to watch most of Joba Chamberlain's dominant performance. His dominance was over casted by four run first inning, but that takes nothing way from Chamberlain striking out the final eight batters he faced. Chamberlain works himself up on the mound quite a bit, reminding me a little bit of Carlos Zambrano back in 2003 and 2004 (Here is a picture of Zambrano. And another).
The big picture is that Chamberlain has had success at Yankee stadium despite his age. The intensity he brings to the Yankees is going to produce wins, and being around guys like A.J. Burnett and Andy Pettitte, known for their poise and intensity on the mound, will certainly level him out. Zambrano is coming off his sixth season with at least 13 wins, and is 3-1 so far this season. Chamberlain has better command of his pitches than Zambrano did when he was 23, and will mature.
Chamberlain is now 1-1 with a 3.77 ERA in five games, but owns a career 2.32 ERA in 65 career games. His numbers may look a little better if the Yankee bullpen weren't in ruins, owning the third worst bullpen ERA (6.35 ERA). If the Yankee bullpen were able to keep a one run deficit from becoming a four run deficit, the Yankee bats might have come through. Instead, they appeared checked out batting in the bottom of the ninth.