Would The Indians Fire Wedge?

Share All sharing options for: Would The Indians Fire Wedge? 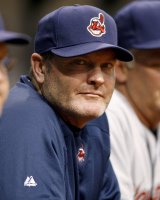 The Indians are currently 6.5 games out of first, and have lost 3 of their last 10 games. Wedge isn't all too concerned about his status, he is more focused on getting his team turned around.
"I'm the manager," he said. "It is my fault. I'm not out there playing, but I'm the manager of this team, and I'm responsible for this club. I try to stay out of the way when things are going well and take full responsibility when they're not going well. The bottom line is, we're a better club than what we're showing and how we're playing. That has to be a direct reflection on me."
This time last year, the Indians were 19-19, but that was when they had C.C. Sabathia and Cliff Lee, who was in Cy Young form. The Indians are hitting just .246 with runners in scoring position and the bullpen owns a 6.18 ERA so far. Wedge turned the team around last year to finish with an 81-81 record, so I suspect the Indians will give him another opportunity to turn them around before he is let go.

It would make sense to bring in someone from the outside if he needs to be replaced. The team is still young and if they do indeed need to go in another direction, then it should be with someone with a fresh thinking. Guys like Alan Trammell of the Cubs or Willie Randolph of the Brewers could take a look at the job openings. John Farrell of the Red Sox is another good option, and Mike Hargrove, who is retired, would make for a nice reunion in Cleveland. He could also set up the return of Manny Ramirez, who was managed by Hargrove in Cleveland. But that is a long ways a way. Wedge's seat isn't as hot as we think, or as Indians fans may want it to be.