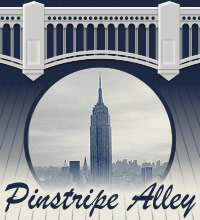 I had the chance to talk to Pinstripe Alley Yankees writer Brandon C. yesterday, and here is what he had to say on all things Yankees.

Marisa Ingemi: Will AJ Burnett be on the Yankees on Opening Day?

Brandon C.: Yes. I can't see any scenario that Burnett isn't, whether deserving or not. He's not tradable due to his struggles and his contract, so unless the Yankees deal him in a bad contract for bad contract deal, he will be on the roster, as he won't go to the minors, either.

MI: If the Yankees were to trade Burnett, what kind of value could they get for him?

MI: What kind of role would Nakajima have in New York?

BC: If he signs, which doesn't seem like it's a given, Nakajima will be the 2011 Eric Chavez for the 2012 Yankees. Rather than taking over for Eduardo Nunez he will compliment Eduardo Nunez in the utility roles.

MI: With CJ Wilson and Mark Buehrle now signed elsewhere, do you envision the Yankees making any big splashes?

BC: It's always a possibility with the Yankees, especially when the Yankees need pitching. The only possibilities I see are the Yankees getting Yu Darvish, or the Yankees making a trade for a pitcher that hasn't been rumored about much. John Danks has been talked about a lot, but I wouldn't consider that a "big splash." I think the most likely big splash is Darvish, but nothing would really surprise me.

MI: As of right now, is the Yankees rotation good enough to compete for a World Series title?

BC: Here's the way I think about it. Once you get into the playoffs, anything can happen. The Phillies rotation last season was supposed to take them to the World Series, but that didn't go as planned. The playoffs are all about being hot at the right time, and being able to succeed in the clutch moments. In a 5 game series you have CC Sabathia pitching twice, and in a seven games series you could have Sabathia pitching three times if necessary. I think if the Yankees make the playoffs, the rotation could be good enough to win the World Series, but the offense would certainly have to click. Also, I know this wasn't part of the question, but I think Phil Hughes will have a bounceback season in 2012 if given the opportunity. The way I see it is CC is the #1, the Yankees somehow get a #2, whether it be in the off-season or the trade deadline, (I expect a busy 2012 trade deadlne) and A.J. Burnett, Ivan Nova, and Phil Hughes in no specific order fill out the rotation. That means no Freddy Garcia, who I think will be out of the rotation early, if he even gets his "guaranteed" spot. The best problem for the Yankees to have is not having a guaranteed spot available for Freddy Garcia, who I wouldn't have even re-signed.


MI: Do you think the Yankees could make a play for Gio Gonzalez?

BC: Honestly, I don't see the Yankees as a match for the Oakland Athletics in any trade if they keep their preferred players as is. The A's want an outfielder, and the Yankees have little to no outfield depth. The Blue Jays or Red Sox, both of whom have outfield depth and the pitchers necessary to acquire Gonzalez, will end up with Gonzalez by the end of the off-season. More likely the Blue Jays, who seem like the frontrunners anyway.

MI: How about Cespedes?

BC: They could, but I hope not. I want the Yankees to go after Jorge Soler, who will cost less and is younger and can season in the minors a little. The Yankees will likely make a run at Cespedes, but decide the price is too high in the long run for a player they don't necessarily need.


MI: If the Yankees were to make a big trade, could Brett Gardner be a trade chip?

BC: He could be, but I doubt the Yankees will give him up easily. As a matter of fact, the belief here is that the only way Brett Gardner is traded is if the Yankees already signed Cespedes, and are dealing for a sure #2 starter.


MI: There have been some rumblings about Nick Swisher being shopped, what could they get for him?

BC: The Yankees won't trade Swisher unless they sign Cespedes or get another outfielder, but if they do trade Swisher they won't get that much for him. Swisher would likely be used in a larger package to get a starter.


MI: Will we see Derek Jeter or ARod move the DH this season?

BC: If Nakajima signs, with both him and Nunez, Jeter and Rodriguez will get a lot of opportunities to be the DH. Jesus Montero will play DH in a large amount of the games, too. Neither Rodriguez nor Jeter will move to permanant DH this season, but both should see more time at DH than usual.


MI: As of this moment, are the Yankees one of the top five teams in baseball?

BC: I think so. In no specific order the top five in my opinion are the Yankees, the Angels, the Rangers, the Phillies, and the Diamondbacks/Tigers in terms of depth and talent. Close but not in the top five are the Red Sox, Rays, and the Cardinals.