Share All sharing options for: Where is former Tigers' catcher Mike Rabelo now?

Mike Rabelo was never viewed as a solid Major League starting catcher, but he was once projected to be a very sufficient backup, ML backstop for a long time. He started out on the right track in his early playing days with the team that took him out of the University of Tampa in the 4th round of the 2001 amateur draft, the Detroit Tigers.  In his first crack at big league action in 2007, he tasted success while serving as the Tigers' #2 catcher behind Ivan "Pudge" Rodriguez, hitting for a batting average that surpassed his previous minor league average totals.

As a result of Rabelo proving his worth to the Tigers as a quality backup catcher, he was included in the Tigers' blockbuster deal with the Florida Marlins for 6x All - Star slugger and perennial MVP candidate Miguel Cabrera as well as former NL ROY award winner and 2005 NL wins leader and NL CY Young award runner - up Dontrelle Willis. Considered a low tier ML contributor in the haul of youngsters sent to the Marlins in return for Cabby and "The D-Train", Rabelo produced very sub-par numbers in his short tenure with the Fish, only batting .202 in 34 games played in a Florida uniform. His poor, inconsistent play led to the Marlins cutting ties with him after the 2008 campaign.

The Tigers offered Rabelo the chance to have a second stint with the big league club in 2010 after they extended a Spring Training invite to him. However, Rabelo didn't make the Tigers' active roster (25 - man roster) out of Spring Training and thus, was relegated to second string catcher duties behind Robinson Diaz at Triple AAA Toledo. After hitting only .143 with one HR and eight RBIs in limited action for the Mudhens, he was relieved of his backup catching responsibilities for the Tigers' Triple AAA affiliate midway through the 2010 season.

After spending seven of his nine minor league seasons (along with part of two big league seasons) in the Tigers' organization, Rabelo was given his first opportunity to show off his tremendous people skills, leadership abilities, and understanding of the game as a coach when the GCL Tigers hired him to be their hitting coach for their 2011 campaign. This officially marked the end of his MLB playing career, which started on September 23rd, 2006, and lasted until June 22nd, 2008. The 31 year old currently resides in Florida, where he serves as the aforementioned hitting coach of the GCL Tigers from June - August. 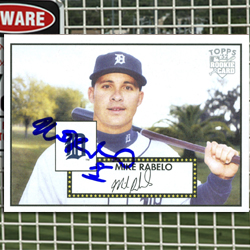