Trade Retrospective: How did the Alex Rodriguez Trade to the Yankees Turn Out?

Share All sharing options for: Trade Retrospective: How did the Alex Rodriguez Trade to the Yankees Turn Out?

It was one year ago today the Texas Rangers traded Joaquin Arias to the New York Mets for Jeff Francouer. Arias was the second and last piece acquired from the Yankees in the Alex Rodriguez trade. The other, Alfonso Soriano, was traded to the Nationals two seasons later by Texas.

The Yankees aren't complaining. They acquired one of the best players in the history of baseball, steroids or not in Alex Rodriguez. Yes, they took on a hefty contract but the Rangers gave them a hand by picking up $67 million of the $179 million left on Rodriguez's original contract. Before A-Rod opted out of his contract following the 2007 season, he posted a .303/.403/.573 slash line with 173 homers, 88 stolen bases, won a pair of Most Valuable Player trophies, and accumulated a 30 WAR (Wins Above Replacement) in four seasons for the Yankees.

More on the trade after the jump.

Here's what Baseball America had to say on Arias:

Arias, age 19 (No. 4): Arias received a $300,000 bonus in 2001. Known as "Spiderman" because his arms and legs appear to be going in different directions at once, he nonetheless has good body control and is both the fastest baserunner and best defensive infielder in the system. He also has a quick bat and promising raw power, though he needs to draw more walks. He hit .266/.306/.343 with three homers, 48 RBIs and 12 steals in 130 games at Battle Creek last year.

Cano, age 21 (No. 6): Cano is one of the better hitters in the Yankees system, with a smooth stroke, plus bat speed and natural strength that should lead to lots of power once he adds loft to his swing. As he has filled out, he has lost some quickness, which may prompt a move from second to third base. He also could use some more plate discipline. Cano hit .277/.321/.374 with six homers and 63 RBIs in 136 games between Tampa and Trenton last year.

On April 23, 2004, the Rangers announced Joaquin Arias as the player to be named later to complete the Alex Rodriguez deal.

After being traded to the Rangers, Joaquin Arias hit .286/.322/.379 in 242 plate appearances across four seasons for the Rangers. Arias was later traded to the Mets for Jeff Francouer, and is now playing for the Royals Triple-A affiliate. The most surprising note of all may be that Arias is still only 26 years of age.

Robinson Cano has become one of the games finest, and still plays second base. Baseball America was right on in their criticism of Cano's plate discipline; More patience at the plate is needed but that may never develop because of Cano's sweet stroke that allows him to get to any pitch in the strike zone.

Alfonso Soriano hit .274/.316/.498, but with abysmal defensive numbers in his two seasons with the Rangers He was later traded to the Nationals in a four-player trade.

Clearly, the Yankees won the trade and it's not even worth debating. But the biggest loser of all may have been the Chicago Cubs who committed an eight-year deal to Soriano after posting a 40/40 season with the Nationals. The Cubs will pay Soriano $18 million annually for three more seasons.

To recap all the moving pieces, here's a trade tree courtesy of MLB Trade Trees: 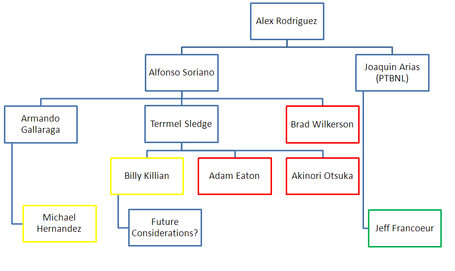