Do you have any fans of other teams across the country, across the vast chasm of the sporting world, with which you empathize? One of my empathees, as a Royals fan, are the Pittsburgh Pirates fans. Their team just sucks, so so badly, and has for as long as I can recall.

That's why when I read the following words from Charlie Wilmoth over at Bucs Dugout, I can't help but recoil in a stomach-punch of a realization -- those are the same words Royals fans use! They're somewhere between justification and a horrible sense of resignation to reality, but with a touch of hope that only the truest fans can maintain. Charlie, I feel you brother!

In other Pirates notes, the club signed Daniel Cabrera to a minor league deal, we have some prospect rankings from MLB and FanGraphs, and an amazing graphic by David Fung over at Beyond the Box Score:

Are Pirates In The Market For ... Anyone? - Bucs Dugout
"The complete absence of action out there right now suggests the Pirates like their team right now, or at least that they've come to terms with it. You can, of course, make the argument that the Bucs weren't going to contend in 2012 anyway, and that therefore, the water-treading the Pirates have done this offseason isn't some great tragedy. But it's still disappointing."

Top 15 Prospects: Pittsburgh Pirates | FanGraphs Baseball
"The organization has some true star power at the top of its minor league depth chart but things begin to peter out after the Top 3 prospects and the cupboard is rather bare by the end of the Top 15. The downside to the system is that the majority of the high-ceiling talent is currently in A-ball or lower so it will be a little while before the fan base begins to reap the benefits of the organization’s renewed emphasis on in-house development." 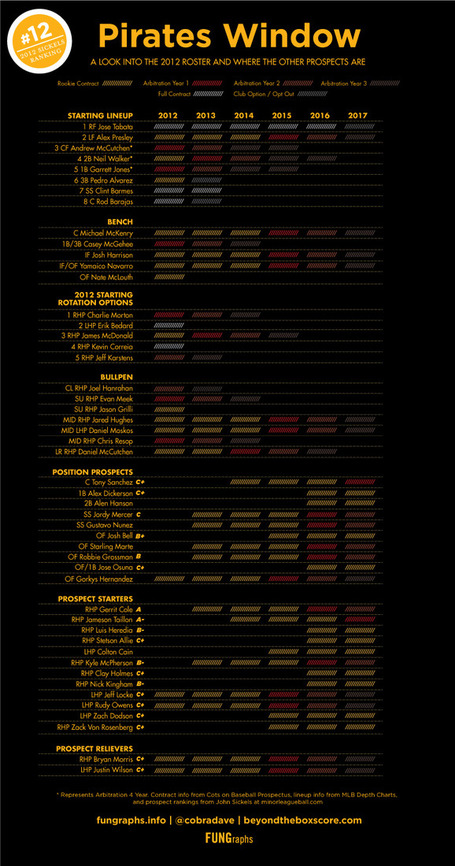