Can the White Sox afford not to keep Kevin Youkilis?

Share All sharing options for: Can the White Sox afford not to keep Kevin Youkilis?

By May of this season, the Chicago White Sox found themselves without a third baseman as they fought for first place in the AL Central. Brent Morel, who had earned the role of starter after hitting eight home runs the previous September, hit .177/.225/.195, then went to the disabled list with a back injury, never to return. The 2011 alternate, Omar Vizquel, had signed as a free agent with the Toronto Blue Jays in the offseason, leaving the White Sox with no real backup plan other than utility infielder Brent Lillibridge. The White Sox hoped a trade for Orlando Hudson of the Padres was the solution, but even if the former Gold Glove second baseman's glove was able to make the transfer to third, his bat sputtered and died, As of June 24th, White Sox third basemen were collectively hitting just .168/.243/.224. The hot corner alone threatened to sink Chicago's season.

Youkilis was in the last guaranteed year of his contract with the Red Sox. The club held a $13 million option on Youkilis's services for 2013, but gave the distinct impression that they weren't excited about picking it up given Youkilis's injury history, the presence of rookie slugger Will Middlebrooks, and manager Bobby Valentine's public criticism of the veteran's commitment. With a trade seeming inevitable, several teams expressed interest for obvious reasons - there aren't nearly enough good third baseman to go around and it's rare that even a slightly tarnished Greek God of Walks and World Series winner is available at midseason. Bleeding at third, the White Sox made the no-brainer move a reality on June 24. Now they the White Sox are in a similar bind when it comes to Youkilis's contract: Do they spend the $13 million to keep him for one more season, or do they let him go as a free agent? 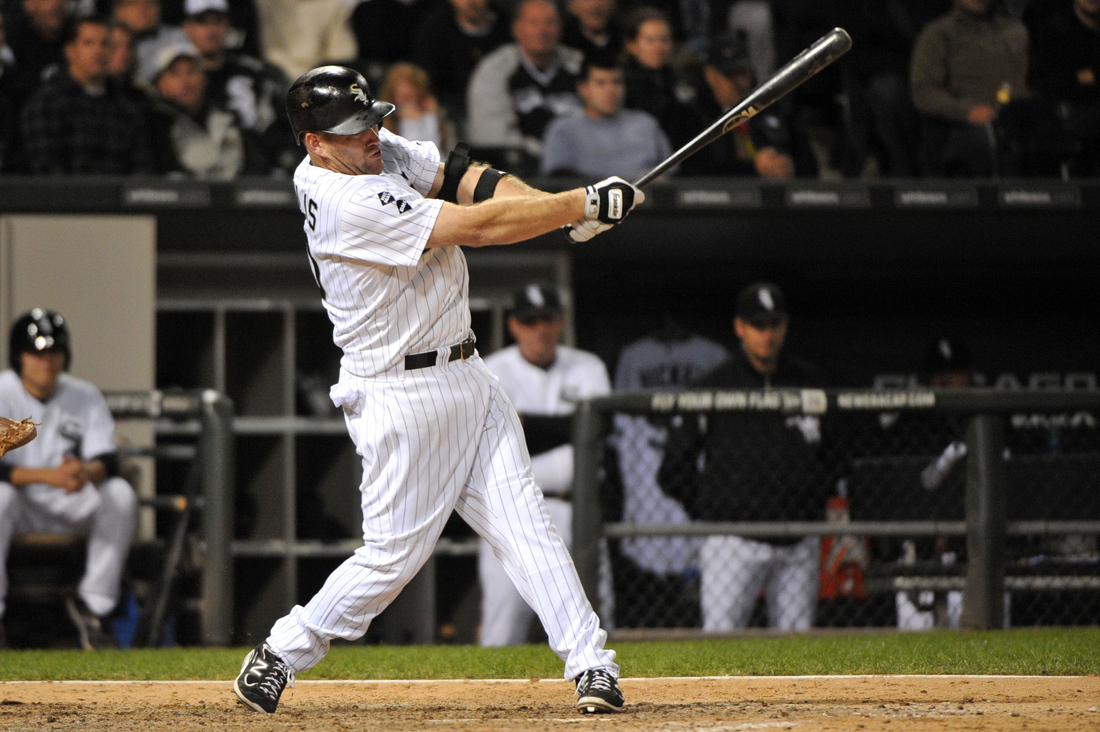 While Youkilis didn't have the best numbers of his career with Chicago, he was still a big improvement on what had come before. Though his batting average was down, he posted a high enough on-base percentage to hit second in the lineup. Most importantly, since the Red Sox picked up nearly $11 million of his $12.5 million salary, he was an inexpensive fix to a very big problem. The upgrade at third helped, and the White Sox were in first place, or tied for first, until the final week of the season, when the offensive collectively ran out of steam.

The White Sox falling short of the postseason for the fourth season in a row raises concerns that the dreaded "R" word, Rebuilding, might be coming to the South Side. Owner Jerry Reinsdorf and general manager Kenny Williams are always hesitant to use the word rebuilding, as they've gone through several payroll restructurings in recent years and yet remained competitive. The 2008 and 2011 payrolls were the fifth-highest in the league, while 2009 and 2012 were closer to league average. The flux is largely due to the fact that it's been difficult for the White Sox to accept a rebuilding mindset; given how weak the AL Central has been in recent seasons, marginal moves might be enough to contend the next season.

The result has really been more of a reallocation of money than an actual reduction. The payroll hasn't fluctuated as much as the way that they've spent it has changed-in years that they've alluded to rebuilding, they've managed to spend the money anyway, just on different players than before. In the 2010-2011 offseason, Reinsdorf wanted to focus on getting young and inexpensive players, but then the White Sox changed course by signing Adam Dunn and offering Paul Konkero a contract extension. They compensated by letting Bobby Jenks and Scott Linebrink go as free agents and trading Juan Pierre (saving over $19 million combined). In 2011, the White Sox traded relief pitcher Sergio Santos to the Toronto Blue Jays for prospect Nestor Molina, though Santos had recently signed a three-year extension worth $30 million. They then pivoted and signed John Danks to a five-year, $65 million contract. Following the Santos trade, Williams said, "It is the start of rebuilding. You guys know I have not used that word in 12 years. It's the start of a rebuilding now. Is it the start of a falling-domino-type rebuilding? No. Absolutely not." In the world of the White Sox, that ambiguous statement accurately describes the team's plans.

This offseason, the White Sox will likely continue to look for ways to cut salaries without a drastic overhaul. While some decisions, like declining the $22 million club option on Jake Peavy seem like obvious ways to keep the payroll in check, some get a bit trickier, including the decision of whether or not to keep Kevin Youkilis. 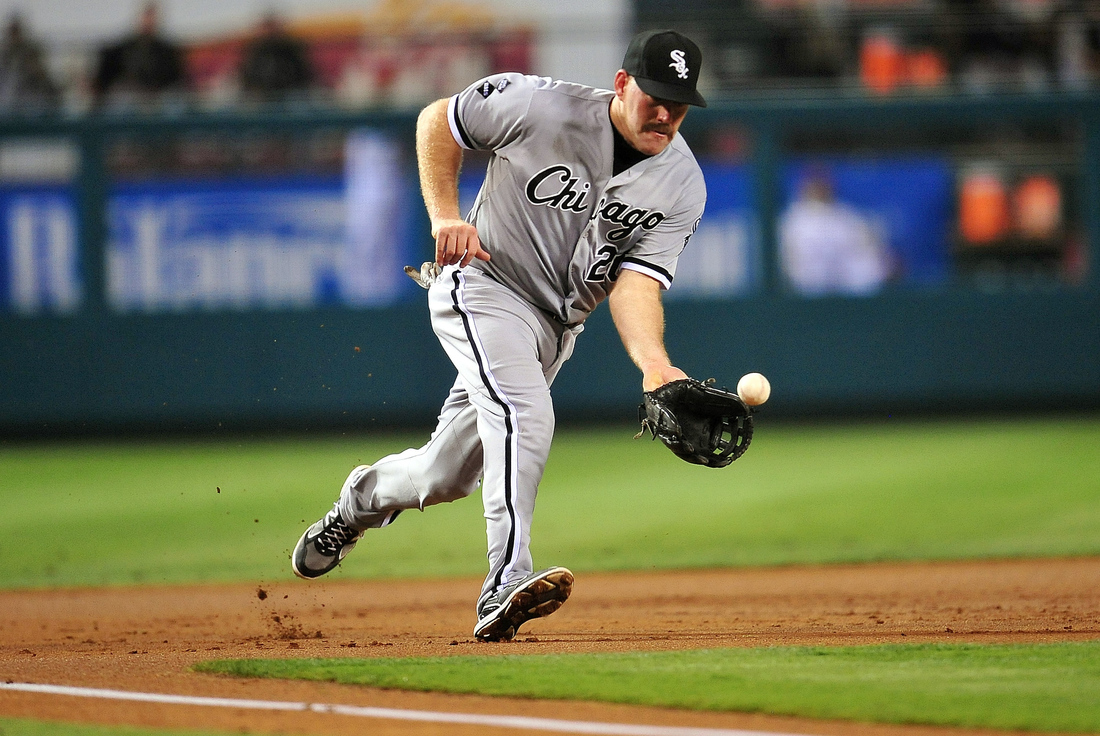 If the White Sox choose not to keep Youkilis, he will become one of the most sought after players on the free agent market despite consecutive off-years. The talent pool for third baseman is incredibly weak, featuring mostly superannuated veterans like Placido Polanco and Scott Rolen, and other teams, such as the Phillies, will also be looking to fill a void at that position. Not only would the White Sox be sending the best free agent at the position (assuming the Mets exercise their option on David Wright) into the market with no return, they will certainly have a tough time finding a replacement for his production. As for in-house options, Orlando Hudson will also be a free agent and there's still some question about Morel's ability and health.

It's likely the White Sox already see the value in keeping Youkilis for the 2013 season; while the Greek God of Walks sobriquet proved to have been an exaggeration (Youkilis is patient, but he's not exactly Ed Yost), his ability to reach base is an asset to a team that finished 23rd in the league in walks. The biggest long-term concern with Youkilis is health. He has struggled with a variety of injuries in recent seasons, including knee and groin problems, but still managed to play 122 games in 2012, and 120 in 2011. Even if his skills have declined or the move from Fenway promises a permanent reduction in his productivity (he was a .303/.399/.508 hitter at Fenway to the point of the trade versus .270/.376/.465 on the road), he remains the best available option.

Yet, given their other financial obligations, the $13 million price tag is steep. The White Sox still have many decisions to make before we can really gauge their opening day payroll. Depending what they decide in regards to options for Peavy, Youkilis, Brett Myers, and Gavin Floyd, their payroll will be roughly between $80-90 million, which does not include Gordon Beckham, Alejandro De Aza, and Philip Humber, all of whom are arbitration-eligible this winter, and Dayan Viciedo, whose original major league contract is up. There are also other free agents, like A.J. Pierzynski, and Francisco Liriano that they might consider keeping as well. Bringing back some fraction of this list will balloon payroll to over $100 million-which doesn't exactly sound like rebuilding dollars. 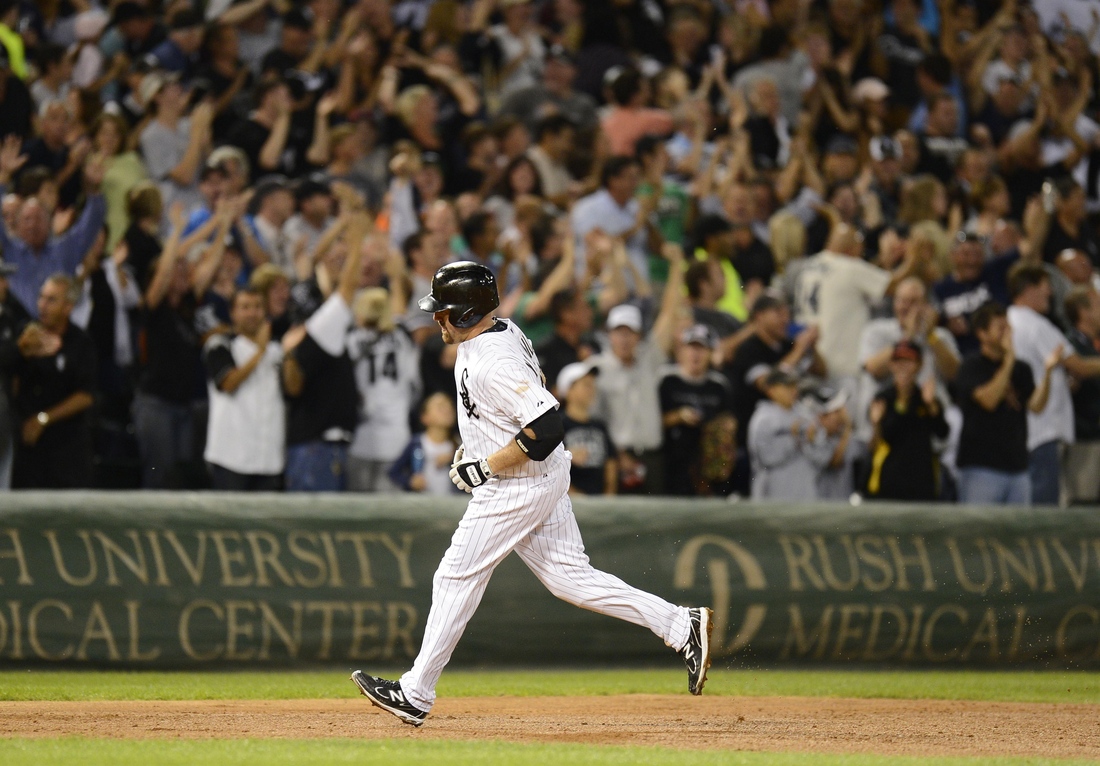 But of all of the roster spots to fill, Youkilis seems to be the most pivotal when you consider his value, position scarcity, and internal options. The decisions the White Sox make on all of the other roster sports will obviously dictate how much of a burden $13 million will be on payroll, but there's one solution that would free up money easily: Trade Alex Rios.

According to the Chicago Tribune's Phil Rogers, the White Sox will consider trading Rios this offseason. His contract guarantees him $13 million per year over the next two seasons (if traded, his salary will rise by $500,000). Rios struggled in 2011, reminding everyone why the Blue Jays placed him on waivers in 2009 in the first place, but 2012 was a comeback season. He hit .304/.334/.516, with a career-high 25 home runs, and proved a defensive upgrade over Carlos Quentin in right field. Much like third base, the free agent market for outfielders is awfully shallow, and given Rios's success this season, it's the perfect time for the White Sox to get from underneath his hefty contract, while getting the maximum return for the trade - and avoiding the possibility of another regression.

The money freed up by trading Rios could mean keeping Kevin Youkilis while potentially filling other roster weaknesses. The White Sox have a little more wiggle room in finding outfield talent than they do third base with Jordan Danks expected to remain in the majors next season. Jared Mitchell might be ready for his debut as well.

The White Sox have a lot of decisions to make about money before the 2013 season begins, but they should try to keep Youkilis. His value to an organization which hasn't had any stability at the hot corner since manager Robin Ventura played there is obvious, as is the danger of letting a veteran third baseman of his caliber onto the market when they don't have anyone waiting to fill his role.

Cee Angi is one of SBN's Designated Columnists.