Share All sharing options for: Blue Jays fans rejoice at megatrade with Marlins

Christmas (…or Boxing Day?) has come early for Toronto Blue Jays fans. Just hours after word emerged that general manager Alex Anthopoulos was "itching" to pull off a trade for starting pitching, he (potentially*) pulled off one of the biggest trades in MLB history, acquiring Jose Reyes, Josh Johnson, Mark Buehrle, Emilio Bonifacio and John Buck for a hodgepodge assortment of Blue Jays, young and old.

So what do Toronto fans think of their shiny new toys?

At the moment, the trade has whopping 88% approval rating among the Bluebird Banter faithful. If they were to re-hold the presidential election today, I think it’s safe to assume that Anthopoulos would take all of Canada’s electoral votes in a landslide.

Here’s just a bit of the fan response for your perusal, because real-time reactions are the best: 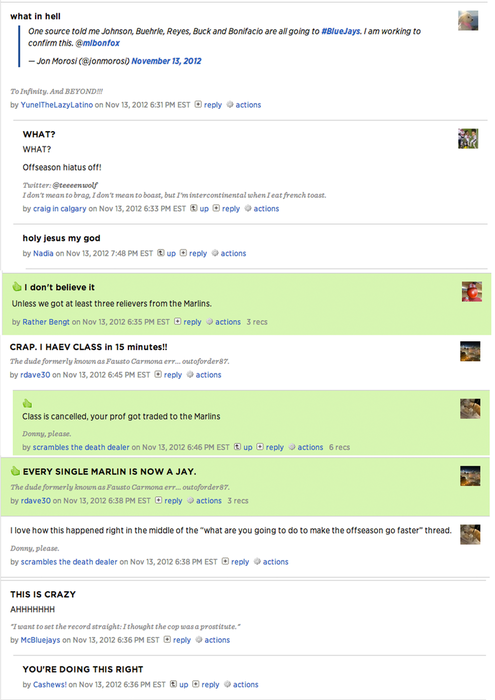 I do suggest that some people put their clothes back on though. It can get cold up there...

As amazing and roster-shaking as this move is for both sides (sorry, Marlins fans), Anthopoulos may not be done yet. The Blue Jays still have four catchers on their 40-man roster, meaning that J.P. Arencibia, Bobby Wilson or the newly acquired John Buck could be on the move before too long (assuming Travis D’Arnaud’s place is safe).