Marlins fans resigned, despondent after yet another "fire sale"

Share All sharing options for: Marlins fans resigned, despondent after yet another "fire sale"

The Miami Marlins made a whole bunch of changes and a whole bunch of promises before to the 2012 season in an attempt to rejuvenate their organization. But as things went south rather quickly, Jeffrey Loria and company have taken it upon themselves to wipe last season from the history books completely. Jose Reyes, Josh Johnson, Mark Buehrle, Emilio Bonifacio and John Buck are all on their way north to Canada for a bunch of Blue Jays prospects and a few "meh" major leaguers.

For Michael Jong over at Fish Stripes, there’s no way to look at this deal, as a Marlins fan, and retain any faith that the organization will ever head in a new, positive direction:

There is no denying that there is one common theme about this Marlins trade, the one theme that you will hear echoed many times over in the next few days on this site and others: this is a fire sale.

This deal is like accomplishing the entire 2006 fire sale in one fell swoop, knocking out everyone with significant major league money and talent away in one massive, depressing trade. Never mind what the Marlins got in return…

This trade had very little to do with getting the best return and had everything to do with dumping the salary of 2012 alongside the memories of a broken season. The Marlins opted to burn the entire house down following a tragedy of a season rather than building upon what they had with measured intelligence…

And with that, the trust of the fan base, which was already beginning to be skeptical in the latter stages of 2012 as the team fielded a series of scrubs at various positions, has been completely shattered.

The Fish Stripes community mostly shared in Jong’s depression and frustration with the team: 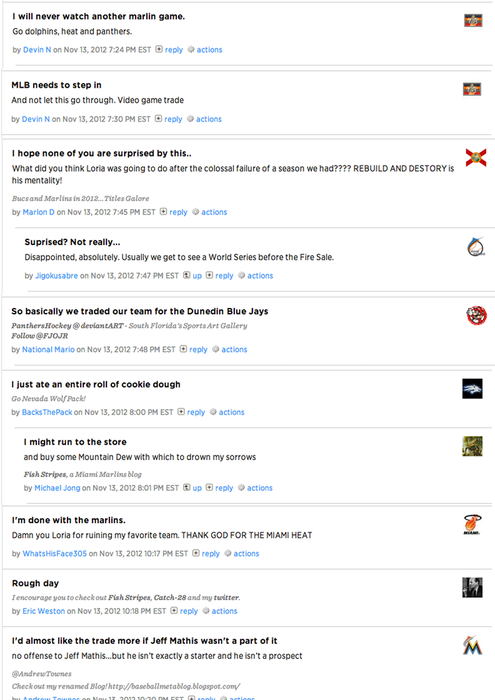 Even Mets fans took the time to join in and commiserate:

Maybe someone can invest in a bullet train from Miami to St. Pete so fans can hop on the Rays bandwagon. I hear they need fans.