We are only three games into the 2012 season and already the DL demons have inflicted serious damage on several players. Since spring began only a month ago, we have seen five meniscus tears of varying degrees, two season-ending ACL tears, two eye orbital fractures and an unexpected flurry of thumb ailments.

But the clear winners on the injury front this spring have been the perennial season-enders, the ulnar collateral ligament and his good friend Tommy John. Six players--with two more likely on the way--have already gone under the knife to complete the procedure another ten players--who underwent it last year--are still rehabbing from. If the college funds of Drs. James Andrews and Lewis Yokum's great-great grandchildren are not paid for yet, they are seriously mismanaging their funds.

(Embiggened graph after the jump) 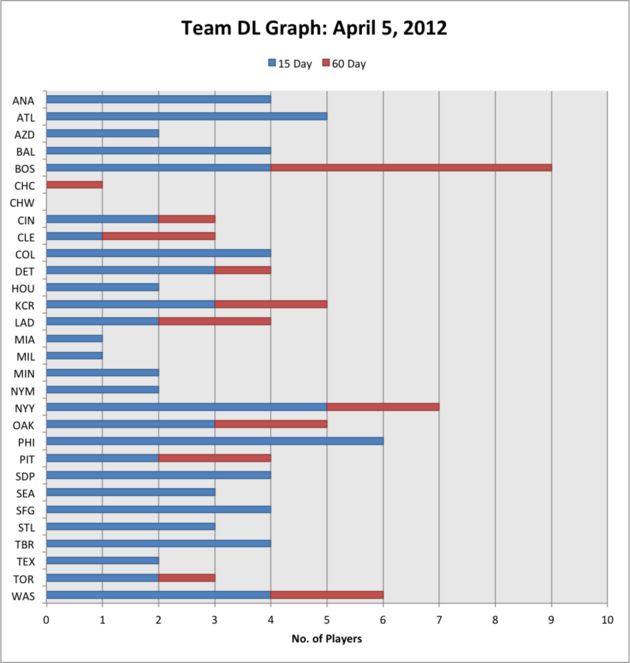 There are 107 players starting the 2012 season on the disabled list, with 23 of those on the 60-Day DL (These numbers are operating on the assumption that Jed Lowrie and Neal Cotts will be placed on the DL). On average, teams are beginning the year with a little over three players (3.56) on the disabled list at an average age of 28.5 years old.

The Boston Red Sox lead the way on the injury front as 2012 begins, with nine players on the DL. I don't have any historical injury data to fact check, but I have to imagine that starting the season with five players on the 60-Day DL is some sort of record.

The only team set to begin the season without any players on the DL is the Chicago White Sox. The White Sox and their training/conditioning duo of Herman Schneider and Allen Thomas have been something of an injury-avoiding marvel the last decade. Even accounting for that terribly gross thing that happened to Jake Peavy's lat muscle, the White Sox have sustained the fewest injuries of any team in the last ten years, and it's not really that close.

It will be fun (maybe?) and interesting to keep an eye on the White Sox this year to see if this trend continues.

Expect the number of players on the 60-Day DL to spike in the coming weeks. Several players who are out for the season (e.g. Joakim Soria, Sergio Escalona) are currently sitting on the 15-Day DL for unknown reasons.