On August 28, minor leaguers Marcus Stroman and Josh Sale---of the Blue Jays and Rays' systems, respectively---became just the latest in a recent influx of players to be suspended fifty games for violating the MLB's drug policy.

Prior to August 1, there had been a total of sixty drug-related suspensions doled out in the 2012 calendar year, averaging about eight and a half violations a month. Since the beginning of August, however, a whopping thirty more suspensions have been handed out, bring the year's total to an even ninety.

Why the recent jump in numbers? No idea. It could be just an anomaly or it could be a worrying trend. Not really sure anyone can tell us why unless testers come out and give us a definitive reason.

What we can do is look at all drug suspensions since 2006, when MLB instituted their policy and see what has or hasn't changed in terms of raw totals and drug types. 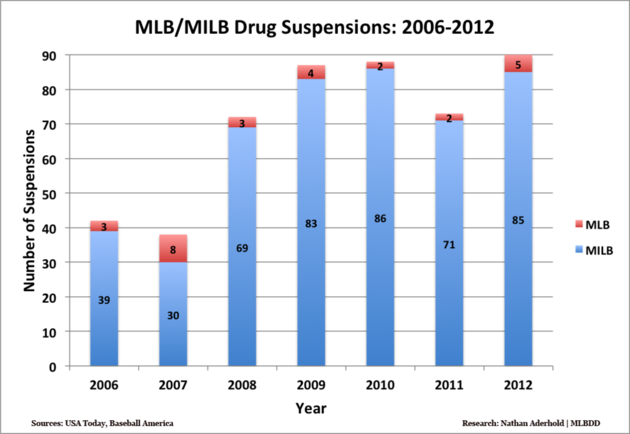 After two seasons of working out the kinks and getting things established, number of violations has been pretty steady, hovering between seventy and ninety suspensions in a calendar year since 2008. This season has resulted in the highest number of suspensions handed out (with over a month to go in the season, no less) and has also accounted for the most major league players suspended since 2007.

So what's to account for the spike in violations this year? Are there really more PED users getting caught? 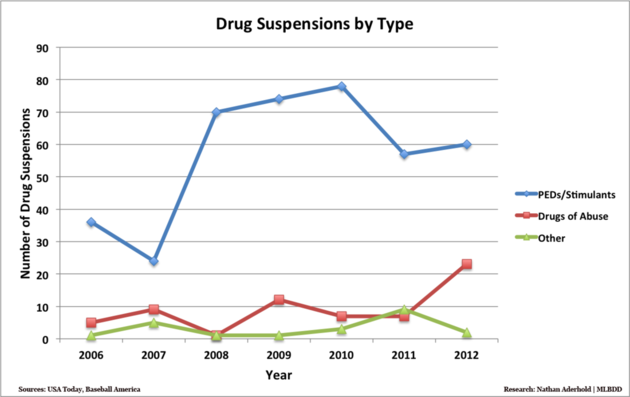 As the chart above indicates*, the spike in overall suspensions this season is not from unprecedented PED use, but actually an alarming number of suspensions for drugs of abuse. Twenty-three minor league players have been suspended for using a drug of abuse this season, well above the previous high of twelve in 2009. The number of PED users has not shifted significantly from last year and seems to actually be in decline when compared to 2008-2010.

*Other indicates a refusal to test or that the type of violation was not disclosed.

Of course, this information is presented with a wide array of caveats. Just because there are fewer violations does not necessarily mean there are fewer users. And, OK, the tests work, but what is MLB doing about preventative measures?

The rather steady results seem to indicate that the tests are working to some extent, but whether that's enough is up to you to decide. Is the MLB's drug policy working? If not, what needs to change?