How Likely Is It That Cliff Lee Will Be Traded?

Share All sharing options for: How Likely Is It That Cliff Lee Will Be Traded? 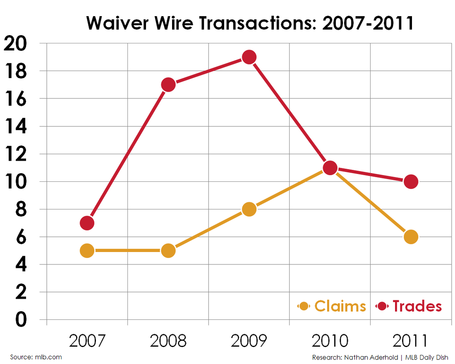 With the trade deadline now behind us, the waiver wire has become the last bastion of hope for teams looking to add outside help in the final two months of the season. Teams now have until the August 31st to add players to their roster and have them be eligible for the playoffs.

Our own Tom Froemming filled us in yesterday on just how post-deadline trades are carried out, but how often are waiver wire trades in August actually completed? What are the chances Cliff Lee will be traded this month?

Over the past five seasons, ninety-nine players have been either claimed or traded on waivers in the month of August. Of those players, thirty-five were claimed outright on waivers and sixty-four were traded (chart).

While the number of waiver claims has hovered between five and eleven over the last half decade, the number of trades has varied rather wildly. A low of seven August waiver trades in 2007 was more than doubled the next two years, only to fall back down the last two seasons.

So what does this all mean for Cliff Lee's trade chances? Well, not much. But you can count on a lot of movement going on around the ace left-hander the next four weeks. It is all circumspect at this point, but with new draft compensation rules in effect and the added tension of the second wildcard, the month of August could very well surpass 2009's high of nineteen waiver trades.