Tim Lincecum contract: You can't put a price on love

The Giants signed Tim Lincecum to a surprisingly lucrative contract yesterday. And though the dollar amount may seem extravagant, you can't put a price on love.

Share All sharing options for: Tim Lincecum contract: You can't put a price on love

Thanks to a 2-year $35M deal, Tim Lincecum will be a Giant through the 2015 season. In retaining him -- for roughly the same amount as the GNP of Turkmenistan -- the Giants have quickly hushed the rumors that began to surround one of the franchise's most beloved players.

The deal may very well be a little chubby for a player that has visibly struggled over the last few seasons. According to FanGraphs, the arrangement equates to about a threefold overpay. They have his combined value over the last two years at $11.9M. So, he's a $6M value at $17.5M per season now, right?

Not so fast. He's more to the Giants than just another player. 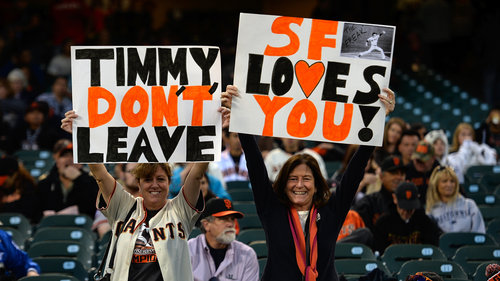 He's been a huge contributor to what has been one of the most successful brands in sports over the last 5 years or so. And while the fans absolutely adore him, they prefer hanging pennants to hanging curveballs -- actually, Lincecum's off-speed and breaking balls have improved considerably according to PITCHf/x values, but "hanging fastballs" wouldn't have made any sense. So just chill out, fact-nerds.

Maybe an important part of dissecting this deal is the question: What would Lincecum have made somewhere else?

He may not have gotten many offers like the one he just signed, but again, he has a lot more value in San Francisco than he would anywhere else. And although the red flags are apparent, he wasn't going to sign in Kansas City, San Diego or some other small-market team. At least one, if not several major-market GMs would've been able to justify the risk and a deep-pocketed bidding war may have followed. Lincecum's star power is self evident. Potential marketability and merchandising play a huge role in negotiations for players as nationally popular as Lincecum.

On the open market, the going rate for a durable starter -- despite his size, Lincecum is just that, with 1265.1 IP since 2008 -- is about $13M, with several variables of course. Ryan Dempster, Edwin Jackson and Dan Haren (who Dave Cameron compares to Lincecum in his latest) have all netted right around that amount in recent free agent deals. This season, Bronson Arroyo made just a shade less than the average yearly figure in Lincecum's deal, and he's never dipped below a 3.29 ERA over a full season, something Lincecum has done three times. But he is much more dedicated to rocking the locks than Timmy... In addition to that list, Mark Buehrle will earn $18M in 2014 and $19M in 2015 because of a backloaded, cloak-and-dagger pact with Jeffrey Loria's Marlins. There are a number of pitchers that signed in that price range that are at least somewhat similar to the Tim Lincecum we've seen over the last few seasons.

And if I'm not missing something, I'm pretty sure none of those pitchers ever had their very own team-centric logo.

A lot of teams were probably kicking themselves this season while they watched reclamation projects like Scott Kazmir and Bartolo Colon mow down their hitters like confused dandelions -- That guy looks like a somehow fatter version of Bartolo Colon... Lincecum hadn't hit those kind of career benders in San Francisco, but he may have been looked at as something of a buy-low candidate, considering his former glory.

There was brief speculation that Lincecum would sign with Seattle because he grew up in the area, but it probably shouldn't have come as a big surprise that he was more interested in dollar figures and stability than his proximity to the old Bellevue Frolf Course. 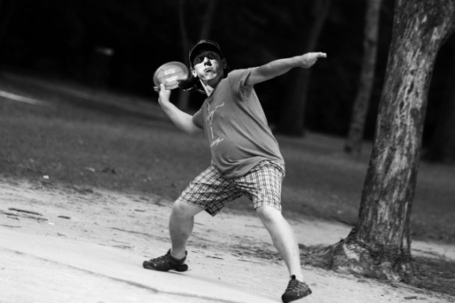 A lot of teams -- including the Giants blood-boiling rivals, the Dodgers -- would've had interest if he had made it to auction. But the Giants couldn't stomach Lincecum in pinstripes or Dodger Blue.

It's easy to say now, but maybe we should've seen this coming.

"As crazy as this might sound to you folks, if I had to do it over again I would have done what we did to sign Barry Zito. I think we've learned a lot from his time here."

Apparently what Sabean learned had nothing to do regretfully burdening a payroll with a contract that would've stressed out even the most stoic of lithium-entranced air traffic controllers. But Lincecum's deal doesn't really compare with that $126M blunder. And Zito's long-awaited absence probably made this deal possible in some ways, so maybe Sabean is on to something...

It's uncertain at this point how the deal will affect the Giants other offseason plans, but team president Larry Baer has said payroll could grow from the 2013 total -- around $145M. That's probably a good idea, because now the Giants have about $40M wrapped up into just three-fifths of their rotation. Yes, that leaves over $100M, but they have 22 other roster spots to fill. That works out to about $4.5M per player. The figure drops to just under $3M per player when you figure in the salaries of Buster Posey, Hunter Pence, Pablo Sandoval, and Angel Pagan.

The Giants also gave up the potential first or second-round draft pick they would've received had Lincecum declined their qualifying offer. A no-trade clause is reportedly included in the deal as well. Needless to say, the deal weaves some complications into Sabean's next few offseasons.

There's definitely some hope mixed into the expectations for both sides. Maybe Lincecum can figure out his fastball again and furnish San Fran with some of those vintage Freak outings. Maybe not. But without access to the finer details of the Giants past and future P&L statements, it's hard to tell if the Giants overpaid by a lot or just a little. But they did overpay. And they appear to be just fine with it, now that they've assured it: Timmy's staying home.