Trading Billy Butler may not be what the fans want, but it could go a long way toward helping the Royals avoid looking back on the 2013 season as a flash in the pan.

But Billy Ray Butler's days gallivanting about the Paris of the Plains may be coming to an end, as ESPN's Buster Olney recently reported. While this isn't anything more than a toe in the water at the moment for Kansas City GM Dayton Moore, the speculation has caused some Royals fans to question the possibility of such a move. Butler has been the Royals organizational Player of the Year in three of the last four years and has been finding the gaps at Kauffman Stadium since he was 21 years-old. He's a fan-favorite and, despite his proclivity for GIDPs, he's been the most consistenly productive hitter in the KC lineup since he first took the field in 2007.

If Butler were traded, fans in Kansas City would likely disapprove unless there was a fantastic return. Hell, the folks there despised Moore's decision to trade Wil Myers and he was never even issued a big league uniform. Many good reasons were given throughout the baseball world in the criticism of the Myers trade, but the most compelling arguments were centered around the Royals need to retain their young, controllable players. Butler shed those designations some time ago, and he will only be getting more expensive from here on out.

Billy seems to enjoy Kansas City. And it's barbecue, as evidenced by the following video that may or may not be Butler trying to pump up his agent as they scout various BBQ establishments as potential buyers for his product:

Yes. That was Dayton Moore tailing them in the rear-view.

It may not be the most popular move the Royals could make, but trading Billy Butler could certainly aid them in putting together an efficient and competitive roster. The deal would definitely have some avid KC detractors, but it could work rather well for several reasons -- as long as Dayton Moore doesn't completely botch it, which is a huge concern all on it's own.

Butler is really good, but c'mon...not that good

This guy is one of those athlete's with the ability to recall even the finest details of in-game events from his past. He's like Ted Williams in that regard. If you ask him about a 2-2 pitch on May 3rd, 2008, he can tell you who threw it, what kind of pitch it was, and how far he probably hit it. But the comparison ends there between him and Williams. Butler is an excellent hitter, but he is by no means an all-time great. In fact, he might not even be one the league's best right now, as far as total offensive production goes. In his career, he's only cracked the top 20 once in wRC+. And while he has been consistently above average, it isn't like "Country Breakfast" is the right-handed reincarnation of Teddy Ballgame, or even Lance Berkman for that matter. This season, Butler predictably had trouble maintaining a career-high 19.9% HR/FB ratio from 2012. His power numbers dropped accordingly and more than half of the balls he put in play were on the ground (53.1%). Not so good, Billy Ray.

Butler is also an exceptionally bad baserunner and first baseman, posting a career -37.0 base running runs "above" average and a -6.1 UZR/150 in just over 3,000 innings at first.

Of course, he's still a legitimate middle-of-the-order bat, and at $8M next year and a $12.5M team option for 2015, he can still be a very valuable hitter for Kansas City or pretty much any other team in the American League -- especially teams whose home field doesn't have what Dayton Moore might describe as "the Tigris and Euphrates for power alleys." But for the Royals, the chance to turn Billy into something even more valuable over the long haul is something they have decided to consider.

You're doing it wrong

Playing in the AL affords the financially-limited Royals the opportunity to use the DH to their advantage in roster building.

Dayton, you probably shouldn't sink a ton of what little money Mr. Glass will give you into a a position that contributes once every two or three innings.

Didn't catch that. Did you say Big Papi? Sure, when you double the payroll and Billy Butler becomes one of the most adored players in the game and begins knocking at the door of the Hall of Fame, then -- and only then -- can you mention David Ortiz in reference to Billy Butler.

Unless of course you were exclusively talking about sandwiches and corresponding trays of crinkle-cut french fries. 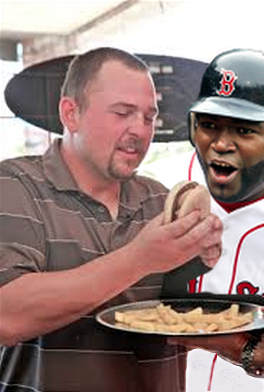 Things are obviously different for the Red Sox and the Royals. Kansas City needs to invest it's restricted budget most heavily in players that will provide the most potent impact.

That's not Billy Butler. Even in his best season, which would probably be 2012 when he posted a .377 wOBA, Butler was worth just 2.9 fWAR.

Other players in that range were Ben Revere, Alberto Callaspo, and Alejandro De Aza. None of those guys compare to Butler in the batter's box, but their contributions in the field and on the base paths make them just as valuable in regards to the win column.

You've got to give Moore credit for the miracle of the Salvador Perez contract ($7M over the first 5 years and escalating options that top out at $6M in 2019), but that doesn't mean he should be given carte blanche to overspend elsewhere.

If the Royals were to trade Butler, a lot of fans would probably see the sauce packet as half-empty, but the team's payroll and the large number of potential replacements make the Butler trade rumors somewhat coherent, which is impressive if Moore had anything to do with starting them.

Okay, so who would replace him?

There are a myriad of approaches the Royals could take in filling the DH role, and with the money they would free up in trading Butler, they may be able to amp up their pursuits on the open market.

A trade is also a possibility, but Butler himself hasn't even been traded yet, so let's stick to one hypothetical player swap at a time.

Free agency will be stratified, from players like Robinson Cano and Shin-Soo Choo down to the minor league signings that teams like the Royals will likely use as a cheaper alternative. Kansas City probably isn't flush enough -- if they trade Billy or not -- to rub shoulders with the upper-tier and they may have trouble attracting those players even if they were. But that doesn't mean the Pickens are Slim by any means. It'd be a great story if the team could bring back Carlos Beltran, but that seems unlikely given the postseason daydreams of all the major-market GMs whose teams are sitting at home right now. You can pretty much count out Jacoby Ellsbury and Curtis Granderson as well, but there are players like Kendrys Morales, Mike Morse, and Corey Hart whose names could potentially be out there. Kansas City could also opt for a veteran like Justin Morneau. None of those guys are superior to Butler, of course, but they have the potential to replace him with acceptable numbers, in terms of wRC+.

Several possibilities exist in the potentiality of the market, but again, it might be wise for the Royals to avoid committing a huge sum of money to the DH slot in their order. Instead, they could target a bounce back candidate or a savvy vet on a short-term deal and focus their attention on developing a young and consistent pitching staff that could be accentuated by whatever return they may get on Butler. Their park is all but coming to life and literally asking Dayton Moore for a team centered around pitching.

What could they get?

It's hard to say, but the early rumors mentioned Seattle and Baltimore as possible trade partners. Moore will probably be looking for a huge return on Butler, so that may severely complicate the process, if it doesn't halt talks entirely. Moore has stressed pitching in the recent past, but one would have to assume Taijuan Walker and Dylan Bundy are off the table. In these two scenarios, the Royals could be looking at adding a pitcher with a number two/number three-type ceiling -- perhaps James Paxton or Kevin Gausman. Looking at second basemen in the deal would be beneficial for the Royals as well, and perhaps one of the Mariners many infield prospects would be enough to get Moore's ears to perk up.

The trade rumors are nothing but speculation at this point, but the fact that the Royals are considering this move may hint at a slight maturation in their blueprint for roster building. They need to acquire every bit of young, controllable talent they can get their hands on, especially if they plan on taking another shot in the dark on a pitcher like Ervin Santana or Jeremy Guthrie this offseason.

Billy Butler has been, and will probably continue to be, a great Royal. But the way he fits into the team's financial situation as an all-bat Designated Hitter has even the synaptically challenged mind of Dayton Moore pondering alternatives. Butler would fit into a larger market much more comfortably, and that's not a jab at his doughy, self-photographed belly. He may not end up being traded, but if the Royals could move him for a projectable rotation prospect and plug the DH opening with a capable veteran, the move could pay off for the Royals.