The Royals can get better by letting Ervin Santana go.

The Royals might re-sign Ervin Santana. He might sign a qualifying offer ($14.1M, one-year deal), if the Royals extend one to him. But he seems likely to decline such an offer in favor of a multi-year-deal from a team willing to surrender a draft pick to sign him, a team that could absorb his future contract rather than being handcuffed to it.

Royals fans should probably be hoping Santana isn't back next year. If he declined the qualifying offer, a first-round draft pick would be awarded to Kansas City at the end of the first round. The Royals already have the 19th pick in the first round and the 5th choice in Competitive Balance Round A, which will follow the compensatory picks. The Competitive Balance pick will likely fall somewhere in the late-thirties in terms of overall chronology, but the final order won't be determined until the free agent market pans out. If the Royals play their hand right, they could have three of the top 40-50 picks in next year's draft and look elsewhere for pitching in 2014. 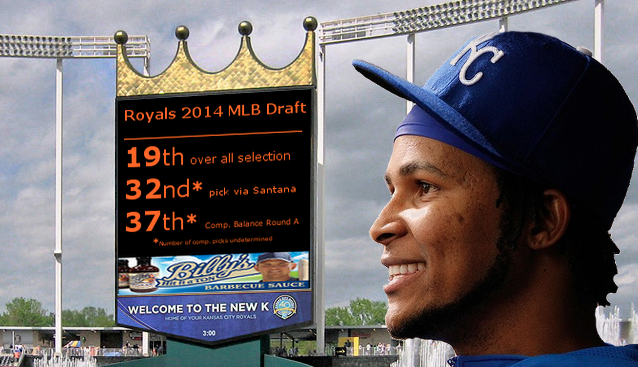 Of course, Kansas City could make all of this lawyerspeak and speculation disappear by signing Santana to an extension. And that's where this situation could get a little scary for Royals fans.

Santana had an surprisingly fantastic season for Kansas City in 2013. They were able to acquire him by trading a 28 year-old minor league LOOGY because Santana had struggled, and the Angels wanted to be free of his $13M salary for the last year of his contract. It's been one of many moves that hasn't worked out well for GM Jerry Dipoto. Even though the Angels paid a cool $1M of Santana's 2013 salary, the $12M remainder was still a hefty sum for the small-market Royals to gamble on a player coming off a 5.16 ERA campaign. But Santana turned out to be the improbable ace on the river the Royals were betting on -- All In.

The season Santana put together in 2013 will presumably place him among the most sought-after pitchers on the market. But the Royals appear to be interested in signing him to an extension, which would diametrically oppose the concept of compensatory picks and the greater marketscape of league's latest adjustments to the CBA. The Royals are a small-market team. That is not going to change. They might never perforate the $100M threshold, outside of the otherwise dystopian future of some unpublished Phillip K. Dick story.

Letting Santana go could net the Royals what equates to a first-round draft pick, and therefore, another inexpensive and controllable asset they can use to remain competitive in the future. The collective bargaining agreement is set up to level the playing field in exactly this way. Flipping a career minor leaguer like Brandon Sisk for a solid year from Santana and one of the best prospects in the upcoming draft class would be a pretty deft little move for Dayton Moore. As Royals fans know quite well, those don't come around too often for their somehow unimaginatively quixotic GM. Perhaps he thought Jeremy Guthrie was actually a gargantuan windmill-giant that would rhythmically paddle him to death if he refused to pay him $20M over the last two years of his contract.

If Moore re-signs Santana, it's likely to be for a rather significant amount of money -- something the Royals shouldn't throw around, you know, since they have very little. What was that song from a couple years ago? Still Fly? MLB Trade Rumors' Steve Adams thinks Ervin can net 5 years and $75M on the open market. Sounds like a lot, but it very well could happen, and Moore could be the one writing the check -- well, asking someone else to write it. The unlikelihood of Santana providing consistently solid production over the next five years is another gamble, but it's more like spending your last dollar on a Powerball ticket than a lucky hand in Texas hold 'em. Not because Santana is a guaranteed failure -- far from it. His performance in 2013 wasn't a fluke. But an ERA over 5.00 in 2014 wouldn't be either, and a salary anywhere near $15M per season would be a huge -- and more importantly, disproportionate -- constraint on their payroll. It's happening on a smaller scale, but the Royals are yet again faced with deciding between a young, inexpensive prospect or a established veteran whose presence helps the team now -- by mortgaging the future. 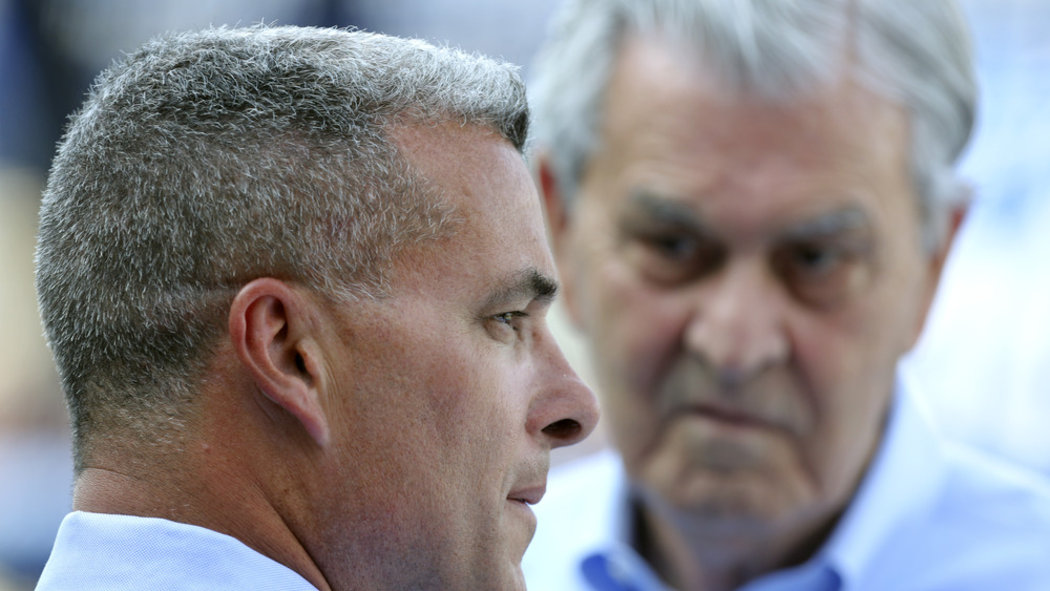 The Royals would obviously like to make another run at the playoffs in 2014, especially since it's the last year of James Shields' contract. But allowing Santana to walk in free agency doesn't mean the team can't look for immediate help elsewhere, whether it's through free agency (where they'd need to avoid losing a draft pick by signing player like Santana) or on the trade market (where they could turn some of the prospects they seem so sweepingly opposed to into proven big leaguers). In other words, they can have it both ways -- if they can avoid myopically scrambling to maintain the minor glory they were able happen into in 2013. They can let Ervin go, get the extra pick, and have reinforcements on the way should they decide to trade more prospects for another, presumably less volatile starting pitcher.

Imagine all the avant-garde draft strategies they could beta-test for the league if they had 3 picks in the top 50!

Unfortunately, it would be a shock if they were able to execute these fairly simple tasks that the CBA was designed to encourage in an effort to balance the competition in baseball. They'll likely approach the situation as if they're one of the big boys now, masquerading around the market with an artificially inflated ego. But as the helium of an 86-win season slowly slips away, they might find themselves helplessly floating back down to the macabre carnival they've spent the last 7 years throwing together.

It's more likely to be a failure in their fallacious plan than a triumph of reason, but if the Royals do let Santana walk, they'll be better equipped to brighten a future that has been injured by the present.