Carlos Beltran rumors: What should the aging superstar expect in free agency?

Recent reports have Carlos Beltran willing to entertain offers from *all* teams. What should he expect?

Share All sharing options for: Carlos Beltran rumors: What should the aging superstar expect in free agency?

Well, at one thing at least. But to be fair, Beltran is probably better at flushing the toilet too.

Carlos Beltran open to free agent offers from all teams 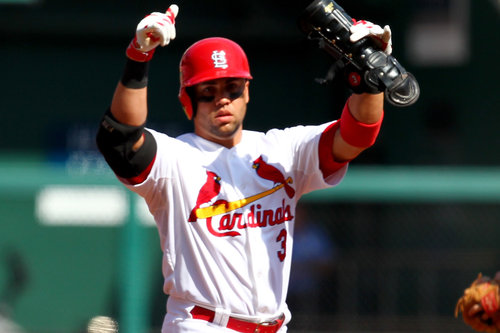 Beltran has been an All-Star each of the last two years and would help a team needing offense.

Beltran passed the Babe with his 16th Postseason homer last night. It was his 37th Postseason game -- Ruth played in 41. He has a truly incredible 1.258 career OPS in the Playoffs to Ruth's 1.211.

Of course, Beltran isn't actually better than Babe Ruth. But he has been historically good in the games that matter most. And that's likely to improve his standing in the free agent market this winter.

The Cardinals would probably love to bring him back for 2014, but they have a surplus of talent in the outfield and they may be able to justify Beltran's absence due to his defensive decline over the last 3 or 4 years. Not to mention the fact that the switch-hitting Mr. October has likely added at least a few million dollars to his asking price with his Ruthian reign over the Postseason.

Beltran probably fits best as a Designated Hitter at this point in his career, but that probably won't stop NL teams from pursuing him when the market opens 5 days after the World Series comes to a close. His fielding hasn't stopped him from being a 3-win player in St. Louis, but as a DH, Beltran could be an extravagant prize for a number of AL clubs. But they better be ready for some competition for his services. Beltran isn't a Scott Boras client anymore, but that doesn't mean he'll be had on the cheap. Current agent Dan Lozano was the author of the 2-year, $26MM deal that landed him in St. Louis. And that was before Babe Ruth was in his rear-view mirror.

Another 2- to 3-year deal is likely, but the annual salary isn't likely to drop significantly, even though Beltran will turn 37 before suiting up for his 2014 team. He's still a genuine top-half of the order bat from both sides of the plate, and GMs with designs on the Postseason will take notice. Who better to get you to the Playoffs than the man that owns them?

Carlos Beltran has a message for all you kids out there with dreams of making it big in baseball: Out-hit the Babe and everything will work out just fine.