The Tigers stayed alive last night with some gutsy performances by Max Scherzer and Victor Martinez, but they're still just one game away from elimination. They may be thinking about what they can do this winter to get themselves another shot, whether they win Game 5 or not.

Share All sharing options for: Detroit Tigers, Robinson Cano could make a 2014 World Series run together

Detroit has just under $108MM tied up in 2014 salaries for Miguel Cabrera, Prince Fielder, Justin Verlander, Anibal Sanchez, Torii Hunter and Victor Martinez. And they still have to give raises to several players through arbitration -- including 2013 Cy Young candidate Max Scherzer.

But the team was able to raise payroll to a record-high $148MM+ for the 2013 season and they were not shy about bringing on Prince when he was the subject of a massive bidding war, so don't count the Tigers out on the biggest prize available this winter -- Robinson Cano. Hal Steinbrenner is already on record as saying the Yanks will make a "solid offer", but it won't be for the 10 years Cano is rumored to desire.

Robinson Cano would make Detroit's lineup an absolute freak show. He would obviously fit any team, but the Tigers have current second baseman Omar Infante coming off the books and they may be looking to make a splash if their season comes to a disappointing end.

With Cano in the fold they could use him in the 2-hole, as the Yankees did this year, and have one of the best 2-3-4 combos in history -- on paper anyway. If they somehow managed this signing, they might be able to simply frighten their 2014 opponents into submission.

Another aspect of the situation that favors Detroit is their complete lack of former NBA point guards tipping their moves, or sending out smoke screens, or whatever Magic Johnson is trying to do.

Whether or not his comments are considered fair play has yet to be determined, but it doesn't seem like good practice to tip your hand. It seems like there's nothing to be gained from it, but this is Magic we're talking about. He's been dealing with the media for decades. He knows what he's doing, right?

Jhonny Peralta will probably not be back due to the team's acquisition of the defensively aesthetic Jose Iglesias. Filling in the rest of the roster may be a challenge if the Tigers let Cano loose in the vault, but it isn't inconceivable. 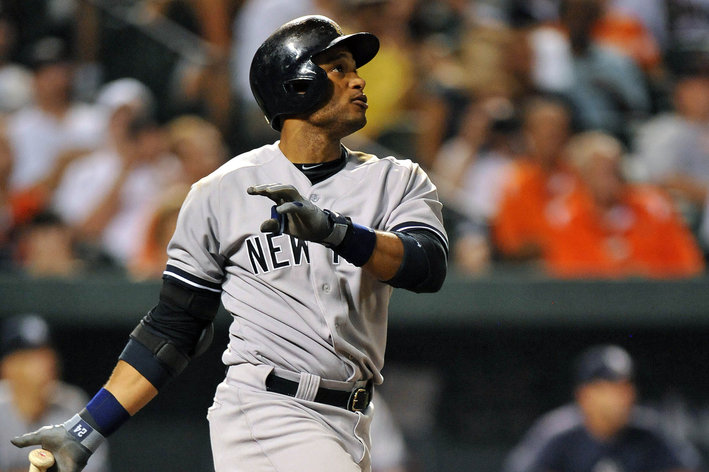 Yankees star second baseman Robinson Cano is at the top of the 2014 free agent class, but a limited market for his services could lower his price tag.

Remember, they weren't considered the favorites for Prince Fielder. They just swooped in and signed him to a cool 9-year, $214MM deal.  That sounds like chump change compared to what Cano is reportedly asking.

Look Jay-Z, we get it. You're staggeringly famous and extra-great, but baseball does't need another Scott Boras -- even if it's what I'm told is a very cool version of him.

He might be close to that valuable in the first few years of what will probably be a 10-year deal, but after that, he'll certainly be overpaid. But someone out there will fork it over. That's just how the market is. There isn't enough data on these mega-contracts to figure out how much a win is worth within their boundaries, but if Cano is worth an average of about 5.0 WAR per year for the next ten years, it'll be hard to argue against. But he'll be 41 years-old when the hypothetical contract ends, so that outcome seems unlikely.

Assuming the Tigers intend avoid paying the league's luxury tax you can allot them somewhere around $80MM for arbitration raises and acquisitions this offseason -- it sounds like it'd take $30MM of that to get Cano, leaving ≈$50MM to fill out the remaining 17 spots on the 25-man roster. And that's before arbitration raises/potential extensions for Max Scherzer, Austin Jackson, Doug Fister, and others.

It may not be probable, but it's possible. And it would make a World Series win in 2014 and beyond much more plausible.