Philadelphia will be looking to address a number of issues this winter. And with Roy Halladay on his way out, the Phillies might try to bring David Price in.

Comparing the World Champion Red Sox and the 4th-place-in-the-NL-East Phillies might not make a lot of sense on the surface, but ESPN's Dan Szymborski did a good job of it, citing the 2012 Red Sox as a good comparison for the 2013 Phils. In the article (or the first 328 free words of it -- you may not want to pay for Insider, but I did -- because if anybody deserves of my money, it's the estates of Walt Disney and William Randolph Hearst), Szymborski suggests the Phillies could promote a similar rise from the ashes if GM Ruben Amaro Jr. makes some bold moves.

One such move he suggests is a trade for Tampa Bay Rays ace David Price. There will be rumors surrounding Price until he finally suits up for another franchise because the Rays simply don't have the payroll flexibility to keep him around. So they'll likely try to maximize their return on him, opting to trade him rather than receiving just one compensatory draft pick if he left via free agency in 2015. Szymborski cites Roy Halladay's exit as one of the reasons Philly could find the flexibility they will need to make such Magical moves, and proposes the idea that a package headlined by Jesse Biddle and Maikel Franco might tempt the Rays enough to bring Price into the fold. Also listed as possibilities for improvement are free agents Ubaldo Jimenez, Carlos Beltran, Matt Garza, and Brian McCann. 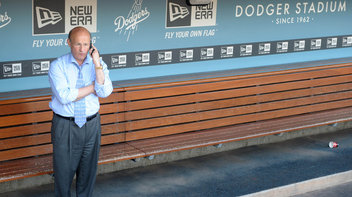 Los Angeles hasn't shied away from spending with the Guggenheim Group at the helm, but are they really going to be in on every player this winter?

Unfortunately for Amaro, Biddle and Franco aren't likely to be the most enticing headliners the Rays will be offered if they began to shop David Price. Though the Phillies might decide to actually imitate the Red Sox -- rather than the Dodgers -- and build their team through their farm system and value signings in free agency instead of paying a huge cost for the rights to Price and what is likely to be a $200M+ extension for the left-hander. The Phillies might see further bloating the top of their payroll as their best shot at a quick turnaround. They would probably have to disregard the luxury tax to bring in enough talent to change their fortunes. Which means paying penalties, making huge commitments for the future, and generally taking the exact opposite approach the Red Sox took in their transformation from worst to first.

Philadelphia currently has 7 players under contract for 2014 at a shade under $120M, according to Baseball Prospectus and Cot's Contracts. Most of that money is tied up in Ryan Howard, Cole Hamels, Cliff Lee, and Jonathan Papelbon. That's $120M before arbitration raises or any kind of addition to the roster. The team also has almost $100M committed to their 2015 payroll already and $63M locked up for 2016. So unless they decide to ignore the luxury tax, like the Dodgers have, they'll be dealing with it for the foreseeable future, especially if they add another long-term deal on the market this winter. It's true that the team just signed a massive, new TV deal that will bring in a ton of revenue, but that won't change the ceiling of the luxury tax ($189M for 2014 and 2015). They'd still have to pay taxes on their surplus, which essentially means wasting it -- something ownership might not be very interested in.

A scenario certainly exists somewhere out there in the smoky ontology of what could be where the Phillies land Price and a major free agent or two and end up winning the 2014 World Series. It just isn't very likely.

More Phillies: The Phillies need Carlos Ruiz Phillies stats you may have missed

If Philadelphia intends to emulate the Red Sox -- as Szymborski suggests -- rather than the Dodgers, as it appears Szymborski was actually suggesting, then they'll need to start by formulating and relying on one of the best player development programs in baseball. And as things stand right now, that means rebuilding.