In just two moves, the Cards appear to have completely restructured their roster. It'll be hard to replace Carlos Beltran, but St. Louis still looks like a serious contender.

After signing Jhonny Peralta and trading for Peter Bourjos, the 2014 Cardinals will look very different from the team that won the NL pennant in 2013 -- especially on defense.

David Freese is gone, and with Matt Carpenter shifting to third, Peralta and Kolten Wong likely manning the middle-infield, and Allen Craig taking over in right, St. Louis is poised to reposition the majority of their team for the coming season. Matt Holliday will probably stay at home in left field, and Yadier Molina will be behind the plate, but the Cardinals' versatility allowed them the luxury of casting a wide net this offseason. 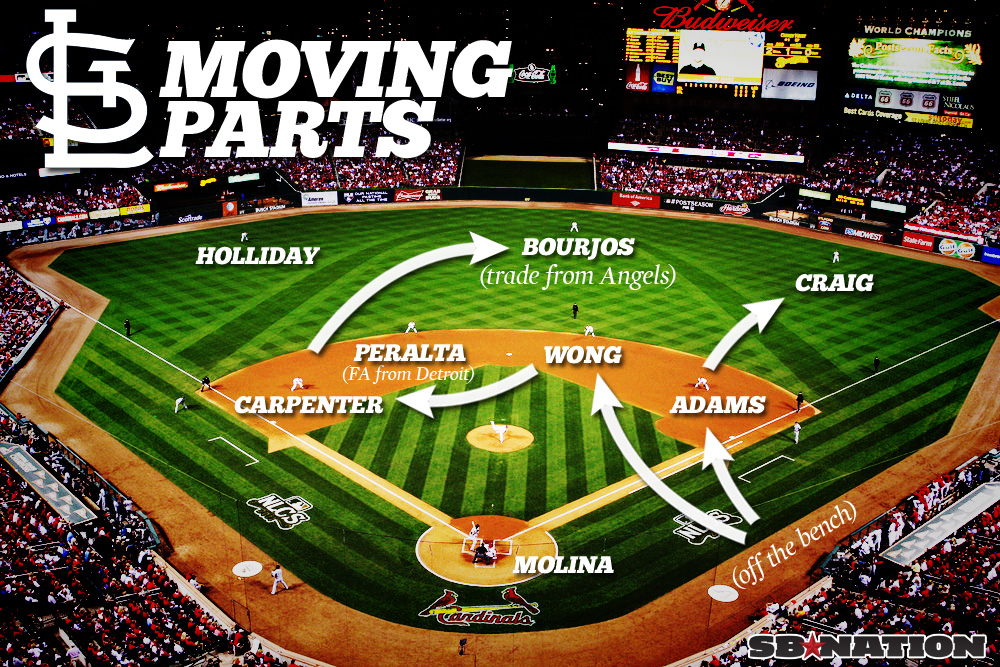 Bourjos gives the Cards elite defense in center field, with a capable backup in case of injury (Jon Jay). Moving former World Series MVP Freese might have been hard for the organization on a sentimental level, but general manager John Mozeliak didn't let his emotions stop him from moving on at the hot corner.

MVP candidate Matt Carpenter was developed as a third baseman and shifted to second out of necessity. A return to his natural position would open the door at second for prospect Kolten Wong -- who will likely be a solid but unspectacular contributor in the infield.

Peralta will be a slight downgrade from Pete Kozma from a defensive perspective, but his bat is why the Cards decided to lock him up long-term. The length of the deal might not be optimal for a player who will turn 32 in May, but Mozeliak valued the immediate returns enough to offer Peralta the security of a four-year deal.

With Beltran moving on, Matt Adams is likely to take over at first, Allen Craig sliding back to right field. Beltran's defensive contribution won't be hard for Craig to match, and his bat has been extremely valuable over the last two seasons. Getting Adams more regular at bats behind the team's solid OBP guys could go a long way toward getting St. Louis back to the World Series.

Craig has never played more 134 games in a season, so the team's roster versatility could be an asset in protecting the team from his absences in the same way it was with Beltran. Outfield prospect Oscar Taveras and Jon Jay could allow the Cardinals to give Craig valuable days of rest and occasionally use him at first base against strong left-handed pitching. If Wong struggles in his first full season, St. Louis can slide Carpenter back to second, with Peralta manning third and Kozma reprising his role at short.

Being able to make adjustments and rest certain players was one of the club's major strengths in 2013, and they have set themselves up to continue to utilize several moving parts in their efforts to successfully navigate the long MLB season.