Baseball's free agent market operates within the simple framework of supply and demand. Sometimes it's surprising, like when the Nationals signed Jayson Werth for $126M to kick off the 2010 Winter Meetings. Other times, the extravagance is expected, like when the Yankees signed CC Sabathia to record-setting deal in 2008. But supply and demand only goes so far. In the past, there has been a breaking point when reasonable teams shift their focus away from players with exorbitant contract demands.

In other words: No one should give Ervin Santana $100M. 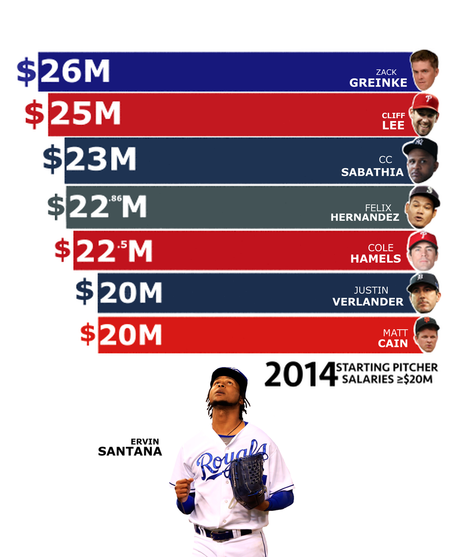 Santana is simply not of the same caliber as the pitchers in that pay grade. He had a fantastic 2013 season, and has had one or two other front of the rotation-type seasons, but he's also finished 3 seasons siwith an ERA over 5.00 since 2007. And those collapses weren't necessarily all BABIP-conspiracies. In fact, Santana was smiled upon by the forces that control balls in play, with below career mean figures in each of his last three seasons. 2013 was his best season as a pro, thanks in large part to career-bests in strand rate and ground ball percentage.

If Santana gets a nine-figure deal, Brandon Sisk (the minor league LOOGY Kansas City sent to the Angels in exchange for Santana) will have quite a story for his grandkids.

"I was traded for a hundred million dollars."

The market for impact starting pitchers is thin at the top, so Santana's agent (Adam Katz of the Wasserman Media Group) will probably end up fetching much more than his client is worth. Joining as the top pitchers available are yet-to-be posted Japanese ace Masahiro Tanaka, Hiroki Kuroda, Matt Garza, and Ubaldo Jimenez. All of these players, including Santana, are likely to earn eight figures per season. But the main concern most teams will have is the number of years they'll need to commit to bring these guys in. Santana is one of the more intriguing arms in that group, and could certainly help any team looking to galvanize its rotation.

But paying Santana ace money isn't a concept many clubs will be arguing over. But they will be competing for his services, and GMs are likely to get aggressive. And if a few of them lose sight of the league's current backdrop of player valuation, they could end up driving the market for Santana into this seemingly absurd territory.

Ervin Santana has been an excellent pitcher during several stretches of his career, but the corresponding setbacks will likely keep him out of the paramount financial tier of starting pitchers.