Share All sharing options for: Royals “process” and the jokes about it will continue with a two-year extension for Dayton Moore

On Friday, the Kansas City Royals extended General Manager Dayton Moore through the 2016 season. Moore has been the Royals' GM since the middle of the 2006, and in 2013, he finally delivered his first winning season, guiding the Royals to an 86-76 record and a third place finish in the AL Central. Now, with that single winning season, he has earned his two more years to build a contender in K.C., allowing hoards of statistically-inclined writers to keep their favorite whipping boy.

In an excellent piece on the extension, Sports Illustrated's Jay Jaffe sums up the major problem with Moore perfectly.

"Moore has shown a knack for drafting and developing talent that can light up prospect lists. Alas, converting the Royals' prospects into useful major leaguers has proven to be more of a challenge than expected, particularly on the pitching side.

Meanwhile, he has often seemed far behind the curve when it has come to filling out his roster, relying on far too many subpar placeholders... [snip]... From 2007 through '12, K.C. put together the AL's worst record (419-553, .431 winning percentage), never winning more than 75 games or finishing higher than third in the generally weak AL Central. In that span, the Royals led the majors in deadwood: no team used more position players 26 and older - non-prospects in other words - who compiled 1.0 WAR or less while playing in at least 150 games."

It is that "deadwood" that has made Moore the butt of so many jokes in the sabermetric community. When he took over the Royals, the team was in a terrible state and no one expected a quick fix. He inherited a 106-loss club on its way to another 100-loss season in 2006. He didn't help the situation at the major league level in his first few years, often making the team's problem worse with signings like the $36 million deal he gave Jose Guillen before the 2008 season, but with the resources of one of the smallest market teams in the game, buying talent wasn't about to turn things around. His background was in scouting and player development, and by 2011, he managed to build what some people believed to be the strongest farm system in history He referred to his team-building strategy as the "the process," giving the unusually larger number of sabermetically-inclined Royals writers the perfect ammunition to mock him with, but below the major-league level there was at least some organized effort to change the story.

Unfortunately, somewhere between the minors and the major league level, Moore seems to be lost. He has an obvious eye for talent, but he has never shown any ability to shift his focus from those raw abilities to prioritize results at the highest level. This has led him to continually put his faith in players who have abilities that simply don't translate to anything resembling major league success. He rewarded athletic, likable and incredibly unproductive outfielder Jeff Francoeur with a two-year, $13.5 million deal after just his second above-average batting line in his six full seasons in the majors. He ignored all the advanced defensive metrics by making Yuniesky Betancourt his starting shortstop- twice. He signed Guillen and Kyle Farnsworth and Willie Bloomquist and Jeff Francis, made Mike Jacobs his full-time DH, gave Kyle Davies 99 starts... the list of his questionable or just plain terrible decisions goes on and on. 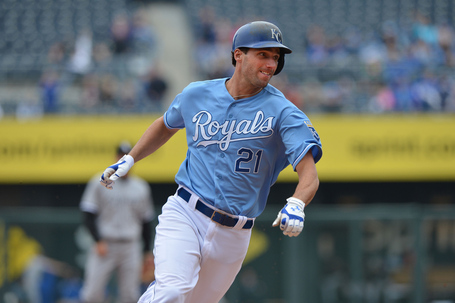 Moore's ongoing attraction to players who don't perform might not expose him to such mockery if he didn't continually back up these moves with equally unjustifiable explanations. After all, the Royals don't have much money to spend on free agents and buying low on guys can be an effective strategy for cash-poor teams, as both the Rays and the Athletics have shown time and again. But Dayton Moore isn't Andrew Friedman or Billy Beane and he reveals that almost every chance he gets.

Discussing his decision to trade for Yuniesky Betancourt, a player with below-average marks at short in both Ultimate Zone Rating (UZR) and Defensive Runs Saved (DRS), who hit .278/.299/.392 in three seasons with the Mariners prior to landing in Kansas City, Moore took issue with the metrics-

"The defensive statistics - I still really don't understand how some of those statistics are evaluated, I really don't. When you watch baseball games every single day, its very apparent who can play defensively and who can't."

His eye-balling of defensive abilities helped him field a team that converted fewer balls in ball play into outs than any other in 2010 and more than just three other teams in 2011.

When asked about the decision to DFA Francoeur last season after he was 24 percent worse than the average hitter for a full season prior to the cut, Moore told Dick Kaegel of MLB.com -

When asked about the team's lack of walks, Moore made perhaps his most ridiculous claim to Jeffrey Flanagan of Fox Sports Kansas City-

"We have the largest ballpark in terms of square footage of any ballpark in baseball. When pitchers come here, they have the mindset to use that park -- put the ball in play, throw strikes, attack the zone. There isn't the same fear factor of getting beat deep that you might have elsewhere.

"I think that plays a huge factor in that walk statistic."

Sadly, Royals pitchers cannot seem to grasp that useful mindset in their own home park as Joe Posnanski points out-

"...while Royals hitters have not finished top half in walks since 1989 (this is one of the most ridiculous stats I've ever seen, by the way) Royals PITCHERS have had the most walks the league four times and finished bottom five in walks 12 times over that same span."

While 2013 might be viewed as the start of Moore turning things around as the farm system he built begins to pay off, such a conclusion is hardly realistic. The Royals gave up a huge package of prospects, headlined by 2013 American League Rookie of the Year, Wil Myers, to get staff ace James Shields for just two seasons. They will likely watch their number-two starter from last season, Ervin Santana, sign elsewhere this off-season. Their 2013 payroll of $81.87 million was the highest in franchise history and nearly double what the team was spending when Moore took over. For all the money spent and the prospects traded away, Moore essentially opened a single season-long window to win and then watched his team finish six games out of the playoffs.

Moore has made just one deal so far this off-season, signing back-of-the-rotation arm Jason Vargas to a four-year/$32 million contract. Despite that, Kansas City will be around $70 million in payroll in 2014 after arbitration salaries are added in. Following recent graduations and the Shields trade, the once-great farm system was ranked 18th in the game by Baseball America prior to the 2013 season. The team now has little money left to spend this off-season and far less future talent to turn to in the place of free agents.

Still, the "process" will continue. Moore has gotten two additional years to see the "contender" he built in 2013 through. Not every move that Moore has made has been terrible, but his methods haven't left much hope for sustainable success. Even so, the decision to keep him on through 2016 isn't much of a surprise. He wasn't fired after six straight losing seasons and he wasn't fired during the 2013 season's darker days when his team lost 14 of 18 games or when they hit fewer home runs over an 11-day span than Cubs pitchers or after the key player in the Shields deal hit better than every player on the Royals in 373 late-season plate appearances. Moore appears to have the kind of undeserved job security that is usually reserved for senators and kings. At least one person out there actually believes in this "process" and he happens to own the team. For everyone else, it is will probably remain a punch line for at least a little bit longer.