Mark Trumbo and the high cost of big power

Mark Trumbo brings serious home run power to Arizona, but they could have gotten similar production at a much lower cost if they weren't so enamored with the long ball.

Share All sharing options for: Mark Trumbo and the high cost of big power

One of the top stories of this week's winter meetings was the three-team deal that sent Mark Trumbo to the Diamondbacks, top Arizona pitching prospect Tyler Skaggs and White Sox starter Hector Santiago to the Angels and Arizona outfield prospect Adam Eaton to Chicago.

A .294 on-base percentage is awful, but the fact that it comes with a 106 wRC+ is actually pretty incredible. It is difficult to be an asset at the plate while making more than 20 extra outs a season. Trumbo pulled that off by hitting 34 home runs, 30 doubles and three triples. Almost 46 percent of his hits went for extra bases and that helped buoy his value in a season where his strikeout rate climbed and his batting average on balls in play was below his normal career levels. The result was an average-ish fWAR from a player who provided negative on defense and on the bases who also made outs often than all but nine other players. That is no easy feat to accomplish. In fact, almost no one in recent history has gotten similar value through quite as extreme a method as Mark Trumbo.

Using Baseball-reference's play index, I looked at all the corner outfield/ first baseman (at least 60% games played at those positions) under 31, with an OPS between .720 and .800 who added less than 0.5 wins on defense over the last ten years. With 46 players making the cut,it is an interesting group, containing players like Brandon Moss, James Loney and Ryan Sweeney, but Trumbo might be the most fascinating player of the bunch. No player in this group gets a larger percentage of their OPS from the slugging side than Trumbo and it isn't all that close.

Since slugging is measured on a larger scale, the average percentage of OPS coming from slugging is 55.5. Trumbo gets 61.1 % of his OPS from slugging. Only one other player comparable player got more than 60 percent of their OPS from their power, ex-Marlin Mike Jacobs (60.2 percent). Five players topped 59 percent, including Moss, newly-signed Marlins first baseman Garrett Jones and Blue Jay Adam Lind. In the last ten years, only two players of any age at any position have devoted a higher portion of their OPS to power- Alfonso Soriano and Marcus Thames.

Trumbo isn't the first player with a slugging-heavy OPS to land in Arizona lately either. The team signed Cody Ross (58.7 percent) and Jason Kubel (58 percent) last winter and they even gave Jacobs a few cups of coffee in 2012 with disastrous results. Big Power, low on-base guys are a soft spot for Arizona, so it was probably Mark Trumbo's destiny to become a Diamondback at some point.

Sadly, to land Trumbo for the next three years, Arizona had to give up six years of Skaggs, a 22-year-old lefty who has been a consensus Top 100 prospect for the past two-years and five years of Adam Eaton, a player who also cracked the BA Top 100 in 2013 and who projects to be very similar in value to Trumbo at the plate, at least according to Dave Cameron of Fangraphs and Steamer

Steamer projects Adam Eaton for a 112 wRC+, Mark Trumbo 113. Trading Eaton for Trumbo straight up is silly, much less adding an arm.

This was an enormous price to pay if Trumbo is merely an average player as all the wins above replacement systems indicate. There are other evaluations that might have played a key role here, such as the Diamondbacks' own projections of both Skaggs and Eaton and their surplus of pitching, but trading two top-100 prospects should net a much bigger haul, regardless. Even if the team doesn't believe the hype around the players they gave up, their value on the open market exceeds what Trumbo can be reasonably expected to produce. Additionally, Trumbo's skill set is valued higher by the arbitration process than those of players who produce similar value in different ways, according to Matt Swartz of MLB Trade Rumors. So, while he is cost-controlled, he will be at the expensive end of the spectrum for someone who provides such average value prior to free agency.

Looking at a few other players who found new homes recently, it is hard not conclude that the Diamondbacks are significantly overvaluing Trumbo's home runs. The day after the Trumbo deal went down, the Mariners signed free agent Corey Hart to a one-year deal worth $6 million with incentives that raise the value to a potential $13 million payoff and then acquired Logan Morrison from the Marlins for the heady cost of reliever Casper Capps, all in the span of about an hour. The steamer projections at Fangraphs project both players to out-hit Trumbo slightly (by wOBA) and both players have experience in the outfield and at first, so they would have given Arizona the same positional options as Trumbo.

Both players have far greater injury concerns, of course. Hart missed all of 2013 after knee surgery and Morrison missed the tail end of 2012 and the start of 2013 with knee injuries. However, that risk is mitigated by the enormous difference in cost between Trumbo and the two newest Mariners. Swartz's arbitration salary projections have Trumbo costing $4.7 million in 2013, just $1.3 short Hart's base salary. Hart could be far more expensive thanks to the incentives, but if he is, it will mean he remained healthy, which should justify the extra expense. Hart also promises the added bonus of a draft pick should he perform well enough to warrant a qualifying offer, something Trumbo will not do for three years, if he does it at all.

Trumbo might be less expensive in dollars than Hart, but with the additional cost in prospects, his price jumps well beyond that of the former-Brewer. Yet, that difference is nothing compared to what Morrison cost. The flame-throwing Capps was the only player Seattle needed to part with to get Morrison, who is more than a year younger than Trumbo. Capps never ranked on any top-100 list, but he was ranked the seventh-best prospect on Seattle's system prior to the 2013 season. With an upper-90's fastball, he still has the ceiling of a major league closer, but he has yet to have any success at the highest level. Regardless of his potential, a single non-elite relief arm like Capps is miles away from the cost of two top-100 prospects. If that isn't enough, Swartz projects Morrison to earn $3 million less than Trumbo in 2014.

It is entirely possible that Arizona has a unique take on Trumbo that has led them to dismiss the estimates of his value from the various wins above replacement systems. They may feel that playing everyday in left, he can be an average or better fielder. They might look at the career-high walk rate he posted in 2013 and see a hitter with primo power who is starting to control the zone at long last. They might believe he is the next Chris Davis. They also love good character guys and Trumbo is certainly that. There ways that Mark Trumbo might justify the cost of this deal by becoming a different player, but looking at the player he has been, it is a bad deal for the Diamondbacks in light of the cost of other comparable players.

Home runs are the most noticeable advantage for Trumbo in Steamer's projections these three players, followed closely by RBIs, which don't have much predictive power. Hart is projected to hit 23 homers, Morrison is projected to hit 18 and Trumbo is projected for 31. That gives Trumbo a slight edge in slugging over Hart and a sizable advantage there over Morrison, but his lack of on-base ability is so great that he still ends up with the lowest wOBA of the three. Steamer isn't the only projection system out there and others will have different takes on the degree of difference, but these three players are not worlds apart. Trumbo is probably the least risky player of three health-wise, but the chance that he will follow similar players like Mike Jacobs and Wily Mo Pena to an early career collapse tempers the advantage he should get for having good knees. If the Diamondbacks were paying for something other than home runs (and/or RBIs) with the package they sent, I can't see what it could be.

Home runs are quite valuable, of course, and they are also becoming more rare- 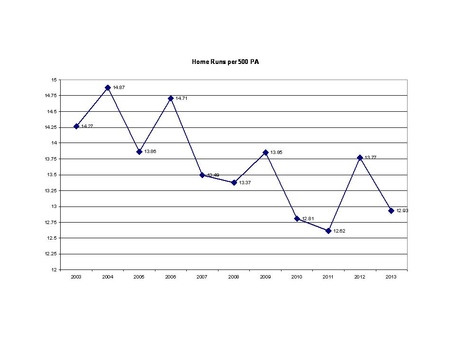 Scarcity tends to raise the price of any commodity. If the difference in cost between Hart and Morrison and Trumbo is any clue, we might be approaching a dinger bubble. Home runs are something teams should want to add, but there is no minimum number of home runs a team must hit to be competitive. If a team can generate the same value in other ways, they can get away without many home runs. For a team attempting to bolster their offense, buying or trading for high-home run total players might be the most expensive route to improvement possible. Home run hitters make more in arbitration, command higher free agent salaries and bigger returns in trade than players with comparable overall production.

In his analysis of the Trumbo deal, R.J. Anderson of Baseball Prospectus wrote-

"In a vacuum, this seems like a questionable trade and ... okay, let's just cut to the chase: You've read the same thing in every analysis concerning a major Diamondbacks trade from the past year. They seem to get $0.75 on the dollar, or pay an extra quarter each time. At some point, you figure, it'll bite them."

Given how much Arizona loves the power side of the OPS equation, it shouldn't come as a surprise that they always seem to end up overpaying. They buy gold tacks when brass ones would serve and while Trumbo is decent player he might be the biggest gold tack in the game.