Royals sign Omar Infante: The good, the bad, and the upgrade

In a small way, it feels like the Royals have signed Robinson Cano.

The Royals had no chance to sign Robinson Cano. Not that they made an offer, but he never even considered playing for them. The team probably didn't consider it either, but they did come away with a pretty nice consolation prize.

It was surprising to some to see Kansas City swoop in and snatch Omar Infante away from the Yankees on a 4-year, $30.25 million deal -- and for good reason. To this day, the team's biggest free agent signing has been the 5-year $55 million deal they shelled out to land Gil Meche in 2006.

More from Royals Review: What to expect from Aoki Royals non-tender Getz

Infante may not shake the very ground beneath him like Cano does, but that's probably just because he doesn't have his own DJ.

A common response to the sociological adventure of Cano's new contract is that he will never be worth what the Mariners have invested in him.

Few are claiming the same about the Royals' signing of the second-best second baseman on the market. Cano will earn more than three times as much as Infante on a yearly basis and eight times as much overall. He'll have to play pretty damn well to be worth that much more than his positional contemporary.

But for the money, Infante might not end up being second-best at all. Cano is  quite obviously the better player. He's better than almost everyone, but his mega-deal might not look so good during the second half of the Mariners vast new commitment.

The Royals used an extra year (as they did with Jason Vargas) to reel in their guy at a lower yearly rate. It might sting to pay Infante and Vargas somewhere around $15 million in 2017, but it'll still be a lot less than Cano will be getting and neither player will be over the hill by the time their deal expires.

Signing Infante looks like a pretty solid move for a Kansas City front office that has made them few and far between.

But like anything else, there's a dialectic manifestly woven into the fibers of Kansas City's new endeavor.

Since the beginning of December, the 10 players listed above have been attached to the Royals on MLB Trade Rumors in one way or another.

And over the last two seasons, none of them have better than Omar Infante -- at least in terms of fWAR.

Infante doesn't lead that group in a single category on that chart. He's just pretty good at everything. He's probably not worth a look on most fantasy draft cheat sheets, but his concerted combination of moderate skills makes him kind of like the baby bear porridge of second baseman.

Infante does't take many walks. In fact, over the last three seasons only seven players in baseball have walked to first less often -- which might've been one of the main reasons the Royals wanted to sign him.

That's just not the kind of hitter he is. Of course, a higher walk percentage would be preferable, but it would be a stretch to call Infante an undisciplined hitter. Since 2011, he's been fanned in just 10% of his plate appearances, making him one of the least K'd players in baseball over that time.

Now that this year's Winter Meetings have effectively come to an end, it is time to look at the new world in which we find ourselves.

With the Winter Meetings in the books, we look at what still could and should be done in the National League.

The Royals likely see Infante as a number-two hitter, and although a higher on-base percentage would certainly trump the time-honored custom of slotting your best contact hitter into the two-spot, Infante is certainly a better option to fill that antiquated role than, say, Alcides Escobar and hi career .295 on-base percentage.

The team's other major acquisition, Norichika Aoki, also has an exceptional low K% and has one of the very best contact rates in baseball. Royals' general manager Dayton Moore has already said he sees Aoki as a lead-off hitter. Pairing him with Infante at the top of the batting order will give the Royals the opportunity to alternate left- and right-handed hitters throughout their batting order, almost entirely. Last season, the team's one- and two-hitters struck out 250 times in 1340 at bats, but that's all but guaranteed to improve with Aoki and Infante filling those spots in the order next season.

Another benefit Infante brings to the table is his borderline immunity to platoon splits. In his career, the righty has put up a .280/.320/.394 against same-siders and against lefties he's batted .279/.316/.429. Naturally, he can drive the ball a little better against left-handers, but generally speaking, he's able to produce consistently no matter which side of the rubber his opponent is toeing. 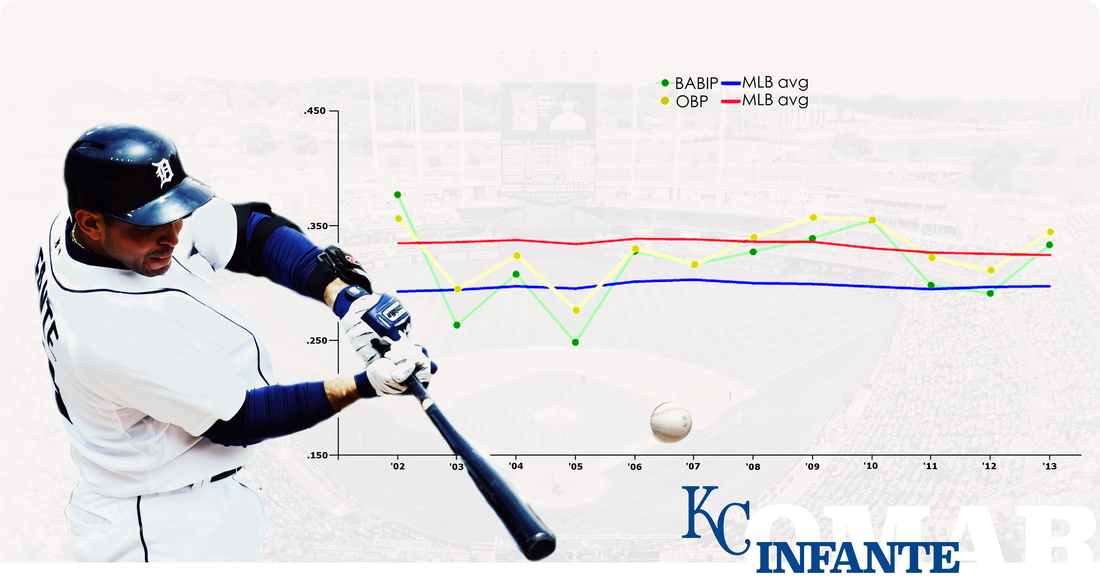 Infante's not really bad at anything.

But there are a few things that could cause concern in regard to his offensive consistency.

The fact that Infante doesn't take many walks contributes to a heavy correlation between his BABIP (batting average on balls in play) and his on-base percentage. Despite the Royals' primordial fascination with batting average, OBP -- which is still a very straightforward precept -- is simply less exclusive in regard to the how of being eligible to score a run.

Infante's fWAR totals have slowly risen over his last seasons. And from 2007 to 2010, the same can be said for his BABIP -- but in 2011 and 2012, the balls he put in play were less cooperative. His BABIP dropped to below .300 for those two seasons, and his offensive impact as a whole suffered accordingly. So why did his overall value continue to rise?

Well, during those down years Infante compensated defensively -- posting 10 DRS (defensive runs saved) and a UZR/150 of 7.5. That made him a top-ten defender at his position for the first time in his career. Before joining the Marlins in '11, Infante was a below average defensive second baseman. Metrics like DRS and UZR/150 tend to fluctuate a bit from year to year, but an improvement that drastic certainly stands out. Last season, those figures seemed to normalize with Infante putting up a 2.4 UZR/150 and a negative DRS. On the other hand, prior to the 2011 season he had never logged 1000+ innings at a single position in a season and he was entering his tenth year in the majors.

It may not be reasonable to expect defensive performances in the mold of his career-bests from '11 and '12, but it appears as though he's settled into his role as a full-time second baseman rather well. His glove should add to his overall value to the Royals.

Another slight concern is the fact that Infante was born before compact discs (sometimes referred to as "C.D.'s") were invented. So, while the Royals will enjoy a low AAV (average annual value) during his 4-year $30 million deal, he could deteriorate as it progresses.

The most valuable thing about landing an adequate player like Infante might be most evident on his days off.

Baseball Prospectus' Ben Lindbergh drew back the notorious Chris Getz Curtain of Anguish recently to reveal the muculent gears of the second baseman's impotence. Even if someone wanted to argue that Getz hasn't been "the worst hitter in the last 30 years," that person would at least have to agree that Chris is in the conversation. He was non-tendered by the club on December 2nd. 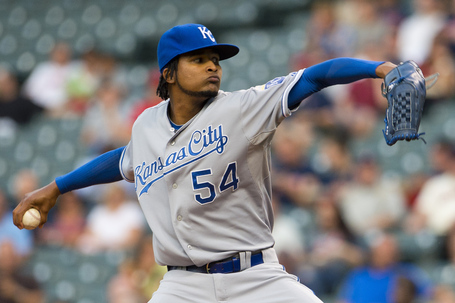 Appearing at number 37 on Lindbergh's worst hitters list: Emilio Bonifacio. To be fair, he had an excellent 2011 season and finished 2013 admirably after being traded to Kansas City. He could remain with the club in a utility role next season. If he's able to maintain the .369 BABIP he put up in 42 games with the Royals last year, he could put some pressure on manager Ned Yost to regularly get him into the lineup. But repeating that performance would take a lot of luck. Boni's career BABIP rests at .332. That doesn't mean he can't be valuable as a Swiss-Army appendage to the roster, but his projected $3.3 million salary could be an issue. If the Royals decide they need to shed payroll in the wake of the Infante deal, Bonifacio could be one of the casualties.

Other than Bonifacio's abrupt lurch forward in 2011, Infante has been a better hitter. And Getz? Well yeah, they're both a little better than Getz.

And that doesn't even include defense. Infante leads all three players in career fielding percentage at second base, but fielding percentage isn't a conclusive yardstick for defensive ability. It only tells a fraction of the story. In addition to being the least error-prone player in this ad hoc two-bag trio, Infante also has the best range with a career 3.2 UZR/150 (Getz 2.1, Bonifacio -2.6). He consistently defends a larger part of the field than his Royal predecessors.

It's been quite a while since Kansas City had a proper second baseman. Infante will easily be the best the team has had since Mark Grudzielanek, and maybe even the best Royal two-bagger since Frank White retired in 1990.

No matter who you compare him to, Omar Infante is going to play a pivotal role in the Royals' attempt at making their first postseason since 1985 -- an endeavor they appear to be more dedicated to than they have been in years.