How six top free agents should vie for a GM's attention

With 2014 around the corner, the remaining free agents are starting to get restless. Ervin Santana’s agent teased out his client’s brand new weapon, so what can the rest of the unemployed do to get attention?

Share All sharing options for: How six top free agents should vie for a GM's attention

As we prepare to enter a new year, one where the marquee free agents like Shin-Soo Choo, Jacoby Ellsbury, and Robinson Cano have already signed, and with the Masahiro Tanaka soap opera nearly complete, it's time for the remaining unemployed ballplayers to get creative in offering up their services to major league clubs. But just how should they go about doing that?

Ervin Santana's agent Jay Alou, having seen that Santana's 3.24 ERA in 211 innings wasn't enough, tweeted that Santana would soon be showing off a "new devastating pitch!"

Perhaps it's a curveball, or a sinker, or maybe it's a terrifying pitch that re-shapes reality on its way to the plate, showing the batter a thousand different realities at once, stunning him into an existential crisis that keeps him from being able to swing the bat. It's an unlikely possibility, but it is one.

While Santana hopes that his new pitch will convince teams that they'll get a repeat of 2013 rather than 2012 (5.16 ERA), there are a number of other promotional stunts that six remaining free agents should bust out to entice GMs to offer contracts.

Cruz has a few things working against him. Namely, a 50 game steroids suspension and the inability to actually move towards baseballs that are hit in his general direction.

While steroids suspensions have had little effect on other players, Jhonny Peralta picking up a cool $53 million this offseason, Cruz is having a little trouble finding a team willing to pay him the $75 million he wants due to his status as a glorified designated hitter. Despite more than 20 home runs in each of the last three years, Fangraphs has pegged his average value over that time at approximately $6 million a year, or roughly the amount that Cody Ross was paid last year as a part-time outfielder.

If Cruz wants to prove that the negative UZRs he's been posting over the last three years are simply a mirage, then he has no choice but to lace up the skates, put on a glittering, sparkling outfit, and get out there and dance, dance, dance.

All I'm saying is that Jack Zduriencik has a soft spot for Disney on Ice...

They got a name for that, Cruz. It's called a bum, and without a job, a residence, or legal tender that's what you're gonna be, man.

The Teams Most Affected By Tanaka's Posting

The initial drama is over; Masahiro Tanaka is coming to America. For some, he is just another high priced free agent, but to others he could be the key to the offseason.

There's a curse in the Drew household. Tim Drew only pitched 84 major league innings and is the lesser half of one of the worst trades of all time, being sent to Montreal along with Bartolo Colon in exchange for Cliff Lee, Grady Sizemore, and Brandon Phillips.

And Stephen, after turning down the Red Sox's qualifying offer, can't find any takers on the open market despite being an above-average hitter and defender, Fangraphs valuing him at $16.9 million last year.

And while Drew's health (124 games or less in each of the last three years) and the draft pick it would cost to sign him are red flags, it's more likely his association with the Drew name that is dragging his brand down.

What Stephen Drew must do now is hold a press conference and announce that, after lengthy DNA testing, he's discovered that he's not actually a part of the Drew family. Rather, his real name is Steel Punchson, Rocco Deepcuts or Jeremiah Baseball, something that will not only catch GMs eyes, but will make for some killer newspaper headlines, too. 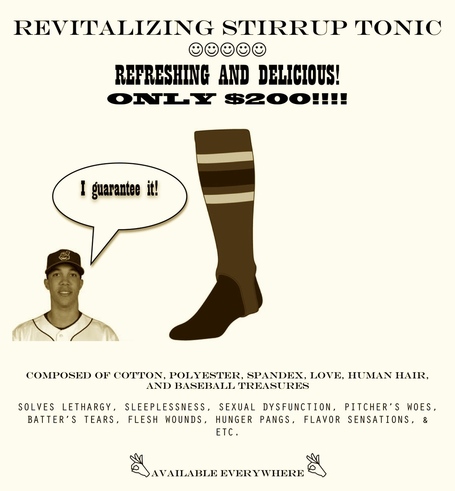 "Come one, come all, to Uncle Ubaldo's Medicine Tonic and Mystical Sideshow. Yes, it is I, the pitcher that tantalized you just a few short years ago with a 96 mph fastball. In the vigor of my youth, I went 19-8 with a 2.88 ERA, giving hope to all the boys and girls of Colorado that their pitching savior was here.

But I was foolish, I was filled with the hubris of youth. I thought I could continue to stuff it for years to come, just as many of you out there think you'll remain vital and vigorous as you reach your mid-to-late 20s.

And for the first half of last year, I was embroiled in this struggle still, pitching with diminishing fastball velocity and posting a 4.56 ERA before the All-Star break.

But then I found the salvation that I'm here to offer you. What I'm about to unveil is a real steal of a deal, a whale of sale, a real upgrade of a trade: my rejuvenating, revitalizing, tantalizing, stirrup socks tonic. Yes sir, these are the socks that will put a boot in your butt, a stick in your backside, and a hammer in your ham hocks.

Why, I used them last year to great effect, posting a 1.82 ERA and upping my K rate in 84 second half innings. I couldn't have done it without the helpful tonic of my stirrup socks.

Now then, any buyers? Blue Jays? Orioles? Anybody?"

After eight years in the majors and close to 1,200 major league innings of roughly league average work, teams still look at Matt Garza and his goatee and think of the top prospect he was many moons ago, forever trading on that promise he showed in the minor leagues.

But after assorted arm issues, and a midseason trade to Texas that saw Garza's ERA rise from 3.17 to 4.38 (despite no real difference in component statistics like strikeouts or walks, though there was a sharp uptick in misogyny), Garza has seen himself become the back-up plan for a number of teams should they lose in the Tanaka sweepstakes.

If Garza doesn't want to wait that long, however, he can emphasize his charming smile. 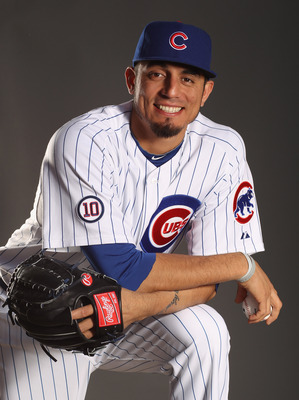 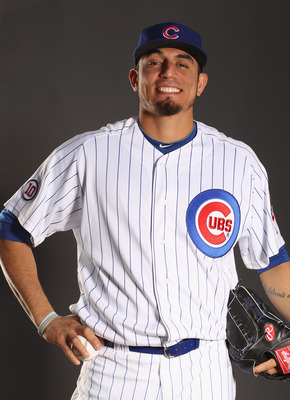 "I like playing baseball. Maybe I could play baseball for you?" 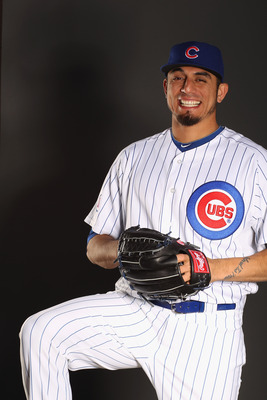 "Please pay me to play baseball. I would like that very, very much."

Bronson Arroyo, despite his long, flowing locks of hair, near guarantee of 200 innings a season (he's topped that mark every year since 2005, save for 2011 when he threw 199), and the best nickname in the game today, has not found many partners this offseason, telling Jerry Crasnick that the rumors of contract offers from the Reds and Twins were mere figments of sportswriter imaginations.

Perhaps teams are worried about his age, as he'll be turning 37 in February. Or perhaps teams are scared off by his dwindling strikeout rate (11th lowest in the last three seasons among qualified pitchers). Maybe they don't trust a BABIP that's consistently below league average.

With all that stacked against him, Bronson Arroyo's got only one choice: put on the concert of his life.

As all good ‘90s movies taught us, the best way to make someone either fall in love with you or offer you a multi-million dollar contract is to sing your heart out. It's something Arroyo's been working for his entire life. 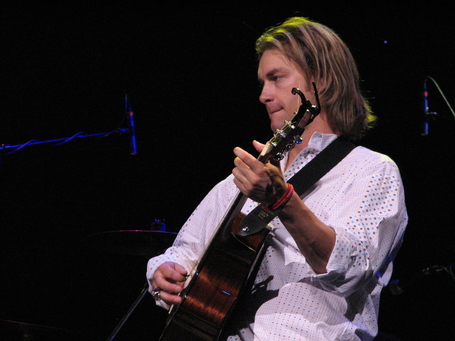 If Arroyo can get a group of baseball ops people into a little coffee shop as he shambles up to the microphone and lays down the National Anthem, teams will realize they not only have a key piece of the rotation, but their pre-game entertainment, as well.

Balfour looked to have a deal with the Baltimore Orioles before their team doctor claimed that his shoulder wasn't strong enough and the whole thing was nixed. This despite Balfour's claim that two other doctors looked at his medical records and signed off on him, saying not only that his shoulder was healthy, but that Balfour was a fine, upstanding young gentleman.

With the Orioles having passed, and most clubs not looking to pay a premium price for back-end bullpen aid, Balfour's only hope is to set up a poster board display in a fourth grade science fair comparing his shoulder with x-rays of healthy shoulders. Given his height, 6'2", and penchant for yelling obscenities, Balfour should have no problem standing out among the other fourth graders and their volcanoes of baking soda and vinegar.

If Balfour plays his cards right and presents on the night that Brian Sabean is in attendance, then he could walk away with a new contract and a blue ribbon for participation.