A plastic fork in the road

Share All sharing options for: A plastic fork in the road

This time, the Royals didn't take the road less traveled.

Or in Chris Getz' case, it'd be the road no one would ever even consider setting foot upon ever, not ever.

Thanks to their (probably) reluctant choice to non-tender Getz just before yesterday's deadline, Kansas City might be able to navigate their way back to something that resembles realism at second base.

Because, for the last several years, they've taken that road less traveled, and it's led them to some pretty far out places. One more wrong turn and they could've ended up in a sort of warped Narnian sorrowscape clanging around against the cobwebby crags of Dayton Moore's vacuous occipital cavern.

The Royals GM seems to have had some kind of manic fascination with Getz over the last 4 seasons, inexplicably clinging to him despite his thoroughly explicit shortcomings as a player. That might be over now.

But Royals fans aren't out of the yellow wood yet.

Getz could still be back in Royal Blue next season. He and Dayton Moore know the steps to this dance pretty well by now. Moore has demoted him, stashed him on the DL, and even designated him for assignment in the past -- only to somehow work him back onto the big league club to the well-representeed chagrin of Royals fans.

Kansas City's other options at second aren't fantastic, but just about anyone would be more valuable than Getz. Emilio Bonifacio filled in admirably in his short stint with the Royals last season -- though his numbers were a little inflated due to an artificially swollen BABIP. Pedro Ciriaco could be in the mix as well, but he's pretty similar to Bonifacio in terms of overall offensive impact (Boni's career wOBA is .297 to Ciriaco's .299). They also have homegrown products Johnny Giavotella and Christian Colon, but neither player looks to have the tools to be anything more than a decent regular -- which would still be a conspicuous improvement over the replacement-level ennui of the Getz era. 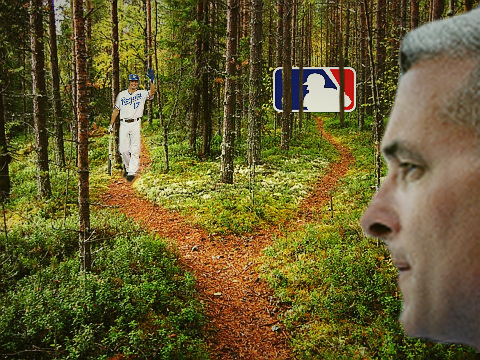 Looking at the names in the paragraph above, it becomes pretty clear that the Royals could use an upgrade at second base. Well, it's clear to some, but the Royals front office is pretty good at convincing themselves to hang on to certain players. You know, like Getz, Luke Hochevar, Jeff Francoeur, Kyle Davies, Yuniesky Betancourt...

Now the team is a serious contender for the services of former Royals Carlos Beltran. He will likely command $16 million per season and he's requesting 3 years -- something most teams aren't willing to offer the 36 year-old. It'd be really nice for Royals fans to see Beltran come home, but the logistics of actually signing him to a contract to play in the state of Missouri seem to make this potential signing another in a long line of bad calls by Dayton Moore.

Not bad. On the other hand, he about to turn 37, and he was worth just 2.0 of those 64.1 wins last season due to waning defensive value and the fact that he is best when he plays somewhere around three to four times a week. Unfortunately, bodies don't get better as a person begins to creep into their forties. And at $16 million per season, Beltran might end up being a hindrance on his former team's ability to operate malleably in a very limited market.

Moore could be handsomely rewarded by Beltran. He's one of the best players on the market, and he could help the Royals significantly on offense despite his now subpar outfielding. However, signing him to a massive AAV (average annual value) through his age-40 season because it would be a great story, simply isn't a luxury the Royals have. They need cost-controlled, full-impact players (like a second baseman, maybe?) rather than bat-only, storybook extravagances to compete with the $150 million payrolls and superior tacticians atop the American League. It wouldn't be a Getz-caliber mistake to reacquire Beltran, but it would be further proof that Dayton Moore really doesn't have much of a plan.

Other teams have been incredibly proactive this offseason, looking to improve, to smooth out the edges of their calculated design; while Moore appears to be stacking a soggy house of cards that double as impromptu handkerchiefs for his ever-beading flop sweat.

But who knows? That's one of the great things about baseball. The Royals might just luck into even more wins next season. Chris Getz and Jason Vargas could lead the Royals to their first World Series in almost thirty years. Anything can happen. But planning for the improbable to happen isn't very smart. At least Moore has taken a step in the right direction by cutting Getz loose -- whether he takes the now formulaic two steps back that follow remains to be seen.