The players aren't the problem. They're among the best athletes in the world and they just added one of the foremost members of that superelite group to their roster.

The fans can't be blamed. In every regard, the spotlight Geoff Baker has shone on the organization stings much more for them than it does for a fan of any other team. Loyal M's fans have gone through a lot. The fact that they will continue to treasure their franchise from this point forward is a further testament to the fact that they're a staunchly devoted fan base.

Neither can the Seattle Mariners franchise. In fact, the club's only role in the situation appears to be as a vehicle for a cowardly and cretinous demagogy. The Mariners are Felix Hernandez and Edgar Martinez and the good versions of Ichiro and ARod.

The Mariners' owners and general manager on the other hand... 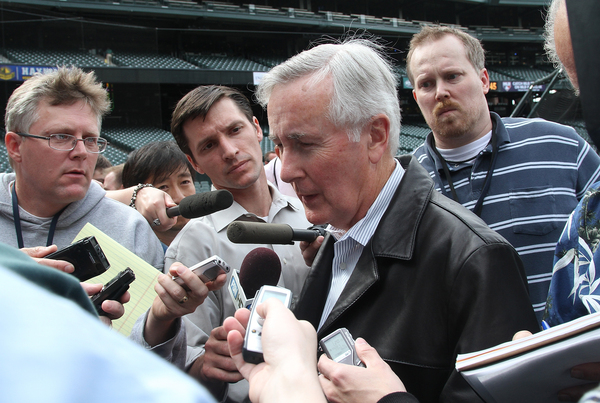 Well, they're something else entirely.

Like me, you may have wondered why in the world a predominantly unsuccessful journeyman like Eric Wedge would turn down a contract extension to manage a Major League Baseball team that would pay him somewhere around $2 million dollars.

Wedge deserves a round of applause for choosing dignity over added wealth. 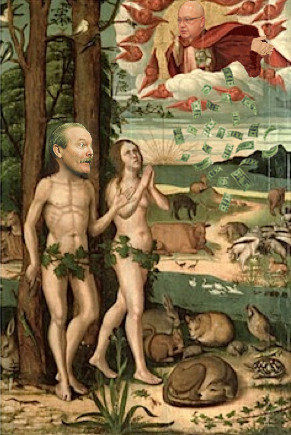 If Eric Wedge had been in the Garden of Eden, we'd all be perfect immortals still living in paradise.

Okay. Maybe that's a stretch, but if someone tempted you with just bags upon bags of cash, wouldn't you take it? Even if you knew it meant dealing with the Dick Triangle of Team President Chuck Armstrong, CEO Howard Lincoln, and GM Jack Zduriencik?

It's not as if Wedge is a saint. Everyone has a bullshit threshold. Even still, there's something to be said for such a steadfast adherence to a moral code in the face of all that sweet and sizable specie.

In the article, Wedge describes the turbulent interactions he endured with Mariners brass in considerable detail -- outlining a scenario in which Zduriencik acted as a sort of domineering patsy for Lincoln and Armstrong. Wedge says Zduriencik would pass along notes to him nightly with absurd suggestions from Armstrong and Lincoln. Suggestions such as:

Demanding better play from young players despite being committed to a "true rebuild."

Perhaps the strangest thing about the way Jack Z is described in the article is the spineless way he is said to have fired the people around Wedge. There are two separate accounts in Baker's article, one with former scouting director Carmen Fusco, and the other with Latin American scout Patrick Guerrero, that Zduriencik said they had "done nothing wrong" and that their firings weren't "his call." It appears as though he was deflected the responsibilities placed on him by his own petulant overseers, childishly lost in between past assurances and his job-saving sycophancy.

Zduriencik wants us to look at the other side of the coin.

"I am aware of some of the comments of former members of our baseball operations group, and I find them unjust, misleading and one-sided. I don’t believe the airing of ‘dirty laundry’ should take place in the public arena, so I am not going to talk about internal meetings, daily conversations and personnel decisions."

So who are we supposed to believe, Jack? The half-dozen well-respected guys recounting these ordeals in specifics that are corroborated by every story to come out of Seattle since 2008? Or the shadowy executives who refuse to comment in detail?

Zduriencik's former special assistant Tony Blengino, now a contributor at FanGraphs, had some especially damning things to say about his former boss.

"Jack never has understood one iota about statistical analysis. To this day, he evaluates hitters by homers, RBI and batting average and pitchers by wins and ERA. Statistical analysis was foreign to him. But he knew he needed it to get in the door."

That didn't surprise some people.

Blengino was hired alongside Zduriencik in 2009. He claims to have built the proposal -- based on advanced stats and scouting -- that earned Zduriencik the position of general manager. Early on, the two worked closely together and saw some early success, but as the team began to struggle, Zduriencik turned on Blengino -- often attempting to detract from his methods and embarrass him in front of ownership. Eventually, he dropped the charade of being a "stats guy" altogether.

"He did what he always does and made fun of something he couldn’t understand...Jack tried to destroy me."

Perhaps the worst thing in the entire report is the proposal that Jack Z knew about Josh Lueke's no contest plea to false imprisonment with violence in a 2008 rape case before acquiring him in a trade two years later with the Texas Rangers. Modernity has desensitized us all, but even the most 4chan-scrambled Millennial feels a little angst toward rapists.

The information in Baker's article came from some of the most respected people in the game -- well, except the parts from Jack Z, Lincoln, and Armstrong. Some of it could be exaggerated. Some of it might not be true at all. But if it's even 50% accurate, it seems like enough to develop a pretty justified disdain for the Mariners' front office.

Not the team colors or the city.

Not the players or the fans.

But the antiquated bully-magnates peering down from their boxes on SAFECO.