The One Where Kyle Lohse Gets Really Worried

On this date in history, apparently nothing all that exciting has ever happened. We've essentially got a choice between Galileo's inquisition, Hermann Maier's nasty spill on the slopes in Nagano, and Mel Gibson's DUI probation.

On this day in 1633 Galileo Galilei arrived in Rome to face charges of heresy for advocating the Copernican theory of a heliocentric solar system. Galileo pled guilty in order to receive a lighter sentence, and was ordered by Pope Urban VIII to spend the remainder of his life under house arrest in his villa near Florence. So glad to see that the church's stance on science has changed so much...

Today's timely trivia question: How long did it take for the Catholic Church to formally admit it had made a mistake in convicting Galileo of heresy? (Answer below)

1. What's that? The Nats might actually be taking an interest in Kyle Lohse now that Gio Gonzalez may face suspension? No wait, no they're not. Well what about the Cardinals or Indians? Nope and nope. So what you're telling me is no one wants him? That Scott Boras has pulled another Edwin Jackson and seriously overplayed his hand? Yep, pretty much. While the qualifying offer probably doomed him to a certain degree, it didn't stop any of the other eight qualified guys from finding homes and nice paychecks. As the final group of teams have their pitchers and catchers report to Spring Training today, Boras has 24 hours to find the veteran right-hander a home before he's officially behind everyone else. I honestly have no idea where Lohse will end up, but I wouldn't be surprised if it were for just one year guaranteed. Looking at the teams that have protected draft picks, no one really stands out as a good fit for Lohse. Maybe the Pirates? Maybe the Twins? We'll just have to wait and see.

2. After a few days of biting nails because of rumors stating that Felix Hernandez might have an elbow problem that would derail his record contract extension, M's fans can breathe easy again. King Felix agreed to his seven-year, $175 million extension with Seattle yesterday, officially making him the richest pitcher in baseball history. Felix is still set to skip the World Baseball Classic (which is looking more and more each day like it'll be a glorified minor-league tournament) but it doesn't appear that his elbow issues are anything serious for the time being.

3. After a few weeks of being incredibly non-committal about who would be closer to start the 2013 season, the Mets announced last week that Frank Francisco would definitely be the closer on Opening Day. Well... not so much. Francisco showed up to camp yesterday and confidently announced that he was at "zero" in terms of how his arm felt, which in Bayesian circles would indicate no hope of return ever. New York is probably hoping that Francisco was exaggerating, if for no reason other than they don't want to pay a guy $6.5 million to sit on the sidelines. Bobby Parnell is definitely a younger, better option to close the door for the Mets, so really this is more of a blessing in disguise.

1. Carlos Zambrano isn't getting any love from MLB clubs this winter, so he may look to take his chances overseas in Asia if no club offers him a deal in the near future. Is it just me or are there an oddly high number of players jumping ship to Chinese/Korean/Japanese ball this offseason?

2. The latest chapter of The Baffling Case of Brandon Inge will apparently be set in Pittsburgh, as the Bucs have signed the infielder to a minor-league deal. Inge, now 36, had a pretty solid three-year stint with the Tigers in the mid-aughts, but he's been nothing short of terrible the last three seasons. Hopefully the Bucs use him primarily as a late-inning defensive replacement.

3. New D'Backs' shortstop Did Gregorius showed up to camp with a strained UCL in his right elbow, which is no bueno. Apparently Arizona did not conduct a physical on the young shortstop before they acquired him from the Reds this winter, which is all sorts of LOLs and gives a good glimpse into how Kevin Towers will succeed in running this once-promising team into the ground.

How "Big Beer" is trying to quell the rise of craft breweries. Viva La Microbrew!

- Inside the Battle of Hoth.

An in-depth look at the terrible battle strategy employed by the Empire in their assault on the Rebel Alliance.

Is there magical dividing line between winning and losing? Yes, and apparently it's 39.

- You know the traditional globe we have where the US is roughly the same size as Africa, and Europe is pretty large? Yeah, well, it's wrong. Here are 19 maps to help you put the world in perspective. 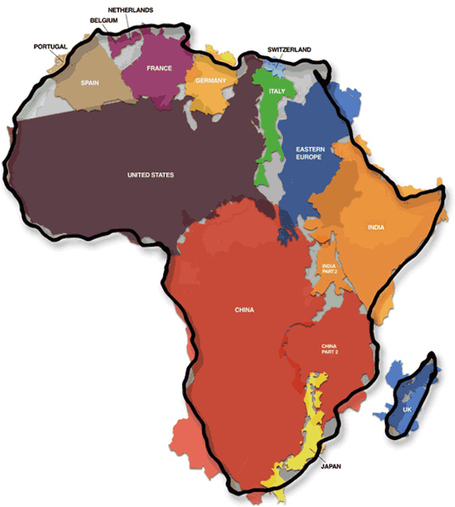