Felix Hernadez Contract: It's Not the Years, It's the Mileage

Felix Hernandez has a new seven-year deal. Though any such contract entails risks, have the Mariners brought him up carefully enough to mitigate them?

Share All sharing options for: Felix Hernadez Contract: It's Not the Years, It's the Mileage

In the entire history of "modern" baseball (going back to 1901), Hernandez has thrown more innings through age 26 than all but nineteen other pitchers. When you think about the way pitchers used to be used -- Ed Walsh threw 422 innings at age 26, Walter Johnson 370 at age 22 -- that's a pretty amazing thing. 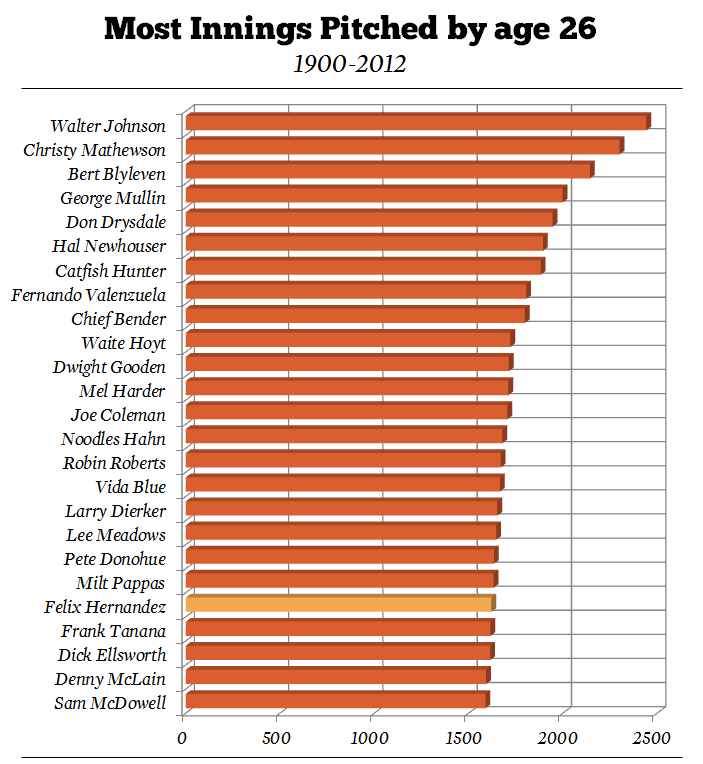 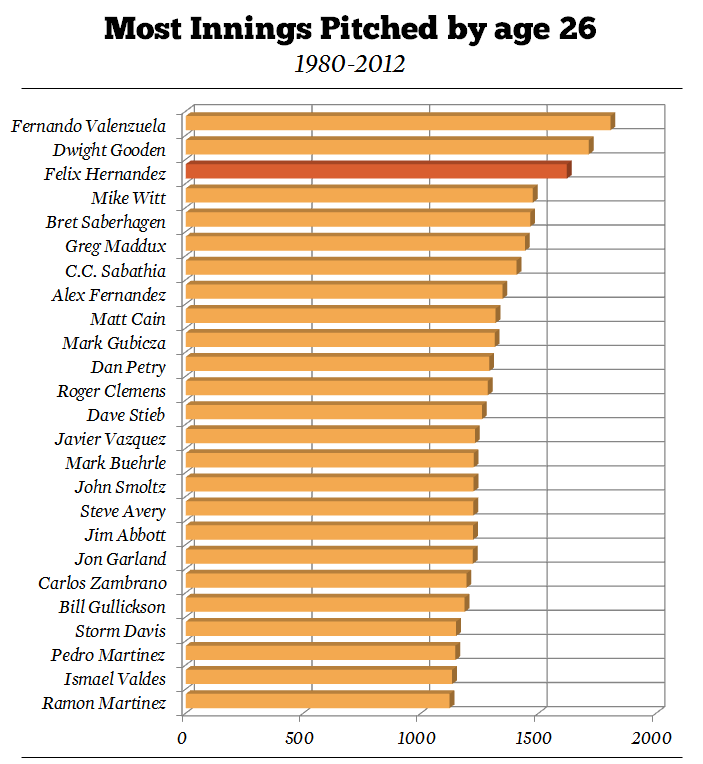 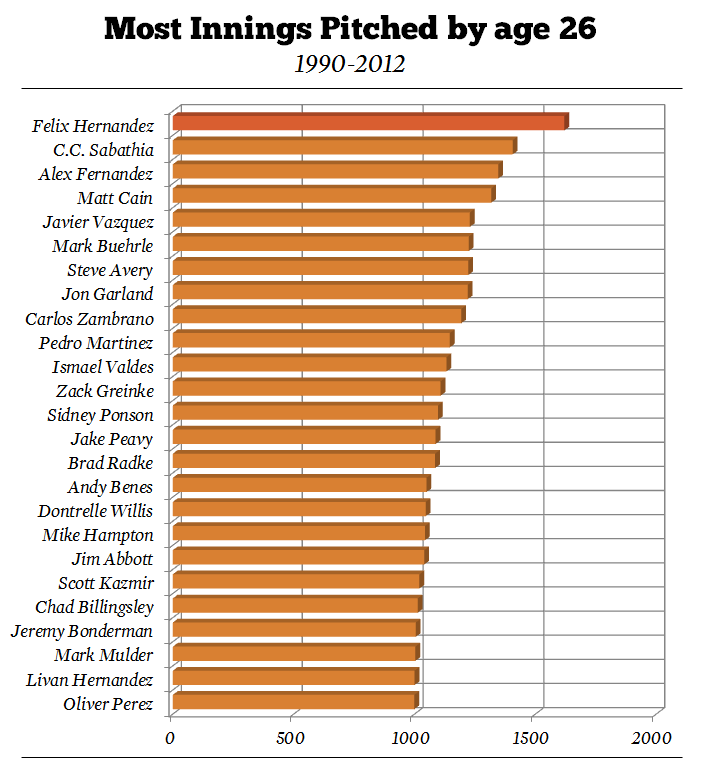 Intuitively, that seems problematic, especially if you're talking about putting that arm under a seven-year extension. The conventional wisdom is that pitchers have a limited amount of innings in their arms before they break down, and that innings at an especially young age are especially harmful. The two pitchers from the 1980s who threw more innings through age-26 than Felix -- Dwight Gooden and Fernando Valenzuela -- are rather famous burnouts.

Gooden and Valenzuela were used quite differently from King Felix, though. Baseball-Reference doesn't have pitch counts going back to their early days, but we can surmise quite a bit. El Toro threw only 19 big-league innings at age 19 (in addition to 174 Double-A innings), but in his age-20 season, his 192 ⅓ innings led the (strike-shortened) league; he started 25 games and threw nine full innings in 13 of them (including one in which he threw ten). Using Tango's Basic Pitch Count Estimator, we can estimate that Valenzuela averaged 116 pitches per start that season. His 10-inning start, on September 1, comes in at an estimated 141 pitches. The next season, at age 21, he threw 285 innings, again at an estimated average of 116 per start, and threw a ten-inning game (on September 19) that comes in at an estimated 159 pitches. In retrospect, it's astounding that Valenzuela was able to clock more than 250 innings each season through age 26 (though at varying levels of effectiveness), and totally unsurprising that he fell to pieces thereafter.

Doc, meanwhile, was in the majors from opening day of his age-19 season (1984), and threw 214 innings that season -- the most by a pitcher under 20 since 1967. He completed nine games and put up an eight-inning effort (on September 1) estimated at 142 pitches; he averaged an estimated 112 pitches per start. The following year -- his all-time-great, Cy-Young-winning year, he threw 276 ⅔ innings, completed 16 games, and averaged an estimated 116 pitches per start; his final start (on October 2) was roughly 153 pitches. Gooden was never that effective again, had his first injury issues in 1987 at age 22, and was irreparably broken at 29.

In many respects, Felix is the first of his kind: a pitcher who came up at a very young age and stayed healthy and effective enough to put up a large number of innings through a still-young age while being treated in the "modern" way.

King Felix is not those guys. Felix started 12 games at age 19 and topped out at 115 pitches, averaging 102. The following year, he started 31 games and averaged only 99 pitches a start, topping out at 117; he was permitted to complete two games, but he got in and out of both in under 100 pitches. In many respects, Felix is the first of his kind: a pitcher who came up at a very young age and stayed healthy and effective enough to put up a large number of innings through a still-young age while being treated in the "modern" way.

Consider the difference in handling of infamous flameout case Mark Prior, who came up just three years before Felix: while his total pitch counts weren't too far apart from Hernandez's at the same ages, he saw many longer outings at young ages than Hernandez did -- at age 22, Prior had nine starts between 122 and 132 pitches, Felix only one.

Now, we know remarkably little about what that means. Research and common sense has suggested that limiting the number of pitches thrown (both per outing and in consecutive outings) can help keep pitchers healthy. Still, pitchers just get hurt, and probably always will; pitching just isn't a thing the human body was meant to do, so breakdowns happen, and we don't quite know how or why.

The best comp for Felix -- and maybe the only one -- might be Sabathia, and that's plenty encouraging. Felix threw slightly more minor-league innings than CC (thanks mostly to an injury to Sabathia during his age-18 season) and has over 200 additional major league innings, but from age 19 on, their (rounded) minor + major-league innings totals like this: 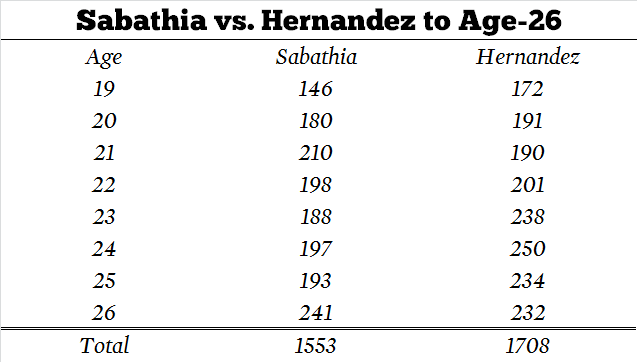 The total difference isn't insignificant, but the commonalities are more important: Both handled a heavy workload at a young age, and both took on considerably more later on; Felix's ramping up came a bit earlier. In the majors, Sabathia averaged 99 pitches per start through age 21, 101 through 24, and 102 through 26; Hernandez has averaged 100, 104 and 105. Hernandez has been ridden just a bit harder. If you can say with any certainty that this is a meaningful difference, you should probably sell that information to a big-league team, because given Sabathia's subsequent "safe" path, you would have identified the inflection point for future injury in young aces.

Sabathia has thrived from age 27 on. In five seasons, he's averaged 232 innings pitched (107 pitches per start), and has put up a fantastic 139 ERA+ (vs. just a 115 through age 26). Workload is only one factor, of course; Sabathia is the only 6'7", 290-pound southpaw in big-league history, so the value of comparisons may be limited. Nevertheless, if stress and workload is a greater determinant than build, game conditions, or factors as yet unexplored, this shows signs of being a "safe" usage pattern for the precocious pitcher.

Like Sabathia, Hernandez has been getting better and better through this point in his career. The improvement hasn't shown up in his ERA or wins totals -- thanks, in large part, to Seattle's declining defense -- but his strikeout rate has generally gone up, his walk and home run rates down. Like Sabathia, Hernandez is something of a tank -- he's certainly not as big as Sabathia, but he's not a sapling, either. It's remarkably easy to look at Felix and see him following basically Sabathia's path over the next five years. And if he did that, he'd likely earn the Mariners their money back with two "free" seasons left to play.

Of course the new contract is a gamble -- it's always going to be a gamble -- and Sabathia's just one example, though aren't any others that fit Felix nearly so well. There's nothing in Hernandez's publicly-available record that suggests anything but that he should be just about the least-concerning pitcher out there. The Mariners have better information on him than anyone else, and if they were willing to take the risk, I'm happy assuming it was a good risk to take. As for the rest of the league, they won't get to sign King Felix during his prime, but they'll still benefit, watching from a safe distance how the first "babied" workhorse fares into his early-mid thirties.