In 2012, three prominent relievers made the jump and experienced three very different outcomes. The Reds can learn something from each as they finally push Chapman into the rotation.

Last offseason, four relievers seemed set to make the switch to starting for the 2012 campaign. The Red Sox' Daniel Bard, Chris Sale of the White Sox, the Rangers' Neftaliz Feliz, and the Reds' Aroldis Chapman were all high-powered arms with some history of starting in their backgrounds.

Instead, Chapman became the Reds closer, not making a start all year, while Bard, Sale, and Felix combined to represent nearly the entire range of outcomes for a reliever converting to starting. Now Chapman is finally going to take the plunge and move back to a starting role for 2013.

Before he was picking presidents, Nate Silver researched the conversion of relievers to starters, and vice versa. He found a few important things in his studies, such as that walks are more damaging for starters than relievers. This is one reason why many starters who struggled with walks, became dominating forces in spite of their control issues when moved to the pen. Silver also figured out how much a pitcher's ERA generally slips by when making the conversion:

...the typical pitcher will have an ERA about 25% higher when pitching in a starting role than when pitching in relief. That is, if you take a given reliever with a 3.00 ERA, your best guess, all else being equal, is that his ERA as a starter would be 3.75.

Chapman's career ERA in the majors, all in relief (to this point, Chapman has never started a game in the majors, and just 16 of his 48 minor-league appearances were starts, with most of those coming back in 2010), is 2.33. Adding 25 percent on top of that would give him an ERA of 2.91 as a starter -- if that's the case, it's a no-brainer to make the switch. That's the ERA increase for the typical pitcher, though: it's not a guarantee, nor is it the only outcome, as last season's trio of relievers-turned-starters can attest.

There's also the concern that Chapman is actually good enough as a closer to actually be more valuable staying in that role going forward, as the likes of Mariano Rivera and Jonathan Papelbon have been before him. Silver's research found that a reliever with a true talent ERA of 2.00 was as valuable as a 3.69 ERA pitcher capable of 200 innings. That's a hugely valuable starter, but as Silver is essentially saying that a once-in-a-generation reliever is what you need to be in order to be too valuable to be converted to starting, it also limits just who is too good in relief to attempt the move to the rotation.

While Chapman has had one season with a sub-2.00 ERA, he also has one at 3.60. Unless it were guaranteed he had another half-decade or more of 2012 in him -- and with relievers, that's nigh impossible -- it would probably be silly not to at least try him as a starter before committing to him in relief forever, given the limited samples involved.

Will the faults that pushed them into relief in the first place bring them back there again?

It's worth noting that Silver's research indicated the same resolution for Feliz, Bard, and Sale a year ago, and the results varied wildly. The questions that remain for Chapman -- and were problematic for last year's bunch as well -- are on the scouting level. Will these pitchers have the stuff to get through the lineups multiple times? Do they have the durability to survive the rigors of a full season in the rotation? Will the faults that pushed them into relief in the first place bring them back there again? These questions have not been answered for Chapman yet, and, given how similar Bard, Sale, and Feliz are on the surface -- and are when compared to Chapman -- we're not going to know the answers until we actually see him in the role.

Chapman has the same repertoire -- high-heat fastball, slider, change-up -- that Feliz, Bard, and Sale employ, making him very similar to the group at least in that regard. That makes looking at the results of their conversions instructive in terms of potential futures for Chapman. Let's break this down into three simple, Sergio Leone-inspired categories.

Chris Sale looked early on as if he might be the first out of the rotation and back in the bullpen. The White Sox were concerned about his elbow, and considered shutting down the starting experiment in order to keep injury from occurring. Instead, Sale never made a relief appearance, starting 29 games and logging 192 innings. The 23-year-old jumped from a career-high 71 innings, and fatigue might have set in a bit during the second half, but overall you have to love the results.

Sale posted a 143 ERA+, was an all-star, and finished sixth in the AL Cy Young vote. He allowed a 4.03 ERA in the second half after giving up far too many homers, but also struck out 94 batters in his final 89 frames, besting the impressive pace he set during the season's first half. He beat out Silver's 25 percent ERA bump forecast by nearly two-tenths of a run despite slowing down late. 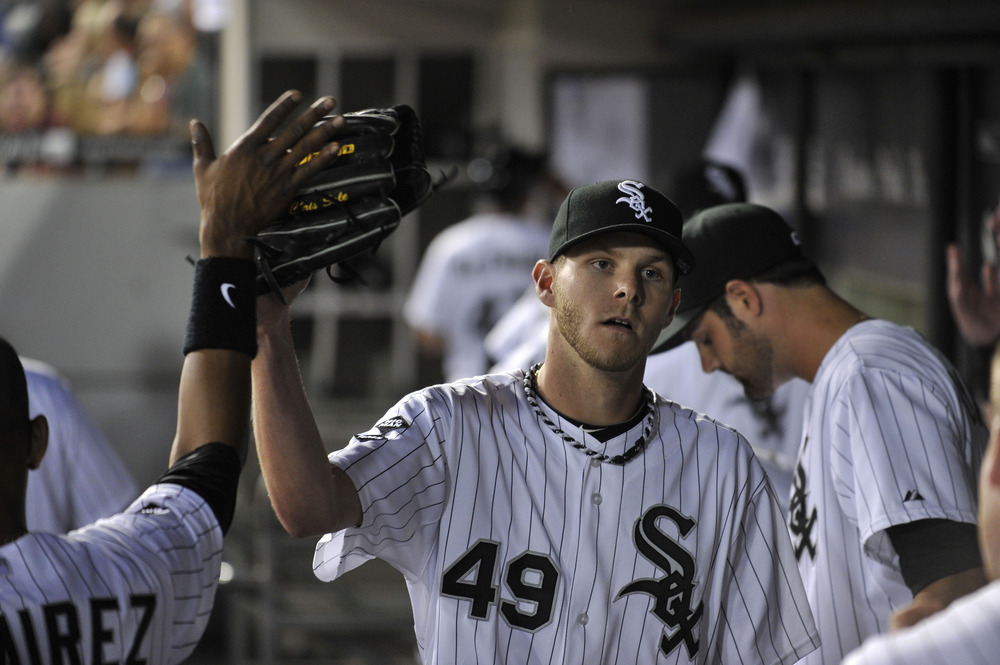 The general rule for workload increases tends to be about 30 innings in a season, but the 23-year-old Sale saw a 120-inning jump.

That being said, while Sale certainly qualifies as the most productive of last year's conversions, there are reasons to be concerned going forward. He survived that inning jump in 2012, but that doesn't mean his arm is safe forever.

The general rule for workload increases tends to be about 30 innings in a season, but the 23-year-old Sale saw a 120-inning jump. Granted, because of the switch from relief to starting, the translation isn't perfect. Even so, though, it would likely have been more reasonable to push Sale to 150 or 160 innings in his first go as a starter, especially with his numbers suffering a bit more in the second half.

The Reds will have to be cautious with Chapman, likely more than the White Sox were with Sale. Every arm is different, but given Sale is all of 180 pounds despite his 6-foot-6 frame, it's safe to say he might not have the body to withstand the kind of punishment that might have been inflicted on him over 192 innings. Chapman is a little less lithe, but some of the same question marks nevertheless hover over him.

Neftali Feliz wasn't bad as a starter in terms of performance. He struck out 7.8 batters per nine, the same as he had in his last season of relief, and posted a 3.16 ERA despite his 4.9 walks per nine innings, in part because his low hit rates were also maintained in the conversion. 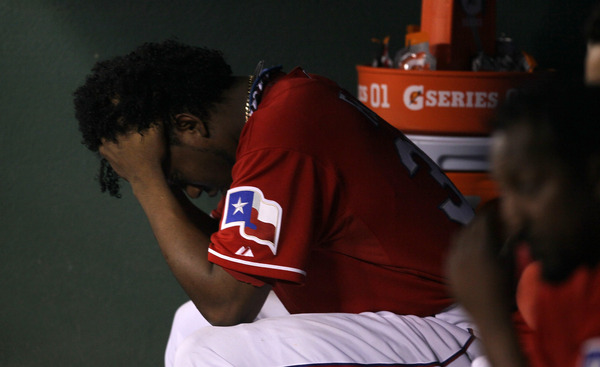 The need for Tommy John surgery often manifests itself in different ways, and doesn't necessarily come all at once.

The problem is that Feliz threw just 42 innings and made seven starts before his season ended due to elbow trouble. Feliz was first placed on the disabled list in mid-May with elbow soreness, then was transferred to the 60-day DL less than a week later. He would not undergo Tommy John surgery until August, meaning he's out of the 2013 picture for much, if not all, of the season, depending on how his rehabilitation goes.

It's impossible to state definitively that Feliz's elbow trouble was caused by his conversion to starting. The need for Tommy John surgery often manifests itself in different ways, and doesn't necessarily come all at once.

John Lackey pitched through most of 2011 with an elbow that was on the brink of needing surgery, but in that same season, Red Sox teammate Rich Hill ad his ulnar collateral ligament go out all at once in a single relief appearance. These two were joined in the Tommy John club in the same season by Daisuke Matsuzaka, who had been dealing with an uncomfortable elbow, but no pain, for months and months until doctors finally determined surgery was required.

Feliz struggled with his control and command in 2011 while still in relief, so there's a believable argument that destructive processes were at work prior to the switch. He wasn't pushed too hard as a starter. Despite one start in which he threw 119 pitches, he averaged just 103 pitches overall, and tossed just 88 pitches in the following start. Unless that one start caused the problem, it's hard to blame his workload.

Chapman not only looked healthy in 2012, but his best control and command ever. As such, Feliz's situation might not be perfectly comparable. Even so, it would behoove the Reds to remember not to push Chapman too hard.

Daniel Bard didn't get hurt, but he didn't survive the season as a starter, either. Instead, his mechanics worsened as the year went on, his arm slot ended up out of whack, his velocity dropped, and he could no longer command the ball down in the zone while attempting to induce grounders. 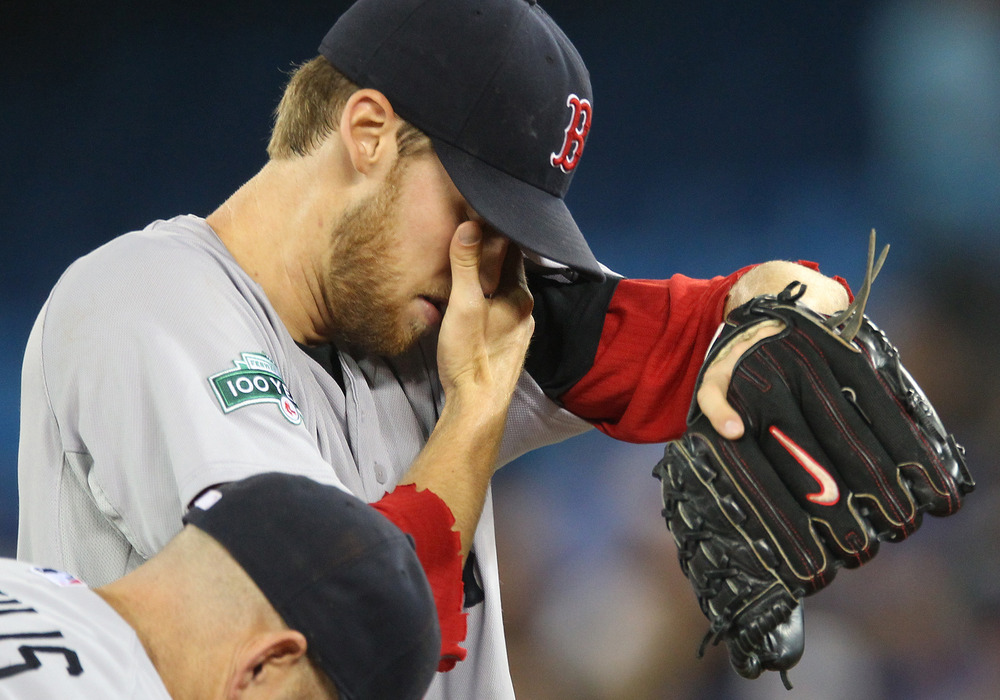 He was demoted to Triple-A in June, converted back to relief, but nevertheless failed to consistently throw strikes or get outs. Bard's return to the majors was painful to watch; you got the sense that he knew where his next pitch was going less often than a knuckler would.

In order to thrive as a starter, a reliever cannot tackle things the same way. They can't just rear back and throw well over 100 miles per hour to end every at-bat, and they not only have to worry about keeping the ball in the strike zone, but in the right spots of the zone, in order to be efficient enough to stick for five, six, seven, or more innings every fifth day.

Chapman can't get caught up in messing with his mechanics or his arm slot too much, as Bard did, or he might find himself in the same downward spiral, struggling to remain relevant a year later.