The One Without A Valentine

To mark the occasion, I thought I'd drop some holiday knowledge rather than the usual "this date in history" stuff. Valentine's Day, aka the Feast of Saint Valentine, began way back in the day as a liturgical holiday to celebrate the numerous Christian saints named Valentinus. At some point, a story started making it's way around that Saint Valentine had married Christians in secret when the practice was outlawed by the Romans in the late 3rd century. The legend goes that he was eventually caught and executed, but on the day before his death he sent a letter to his jailer's daughter -- whom he had cured of blindness -- signing it "Your Valentine."

Today's timely trivia question: The commemoration of Valentine's Day as a day of love picked up steam during the High Middle Ages, when the idea of romantic, "courtly love" became very popular. What writer of that time is thought to have scribed the first poem about Valentine's Day as we know it today? (Answer below)

1. Kyle Lohse is still without a Valentine team for 2013, and things are starting to look a little desperate. Word broke yesterday that Lohse and wingman Scott Boras cold-called Angels' GM Jerry Dipoto, and tried to convince him to take on the right-hander. Dipoto has spurned the pair's advances thus far (THANK GOD!), leaving Lohse and Boras without any real options for the coming season. It's almost gotten to that awkward and sad point where you kind of want a team to take pity on Lohse and sign him, you just really, really, really hope that it won't be your team. Hear that, Dipoto? PLEASE don't sign Kyle Lohse... I'm calling it now: Lohse gets only one year guaranteed and ends up firing Boras a la Edwin Jackson last year.

2. The Reds and Scott Rolen have made it known that the veteran third baseman will not be returning to Cincinnati this year. What that means for Rolen in terms of playing at all in 2013, however, is still a bit of a mystery. Rolen gave about as noncommittal an answer as possible in his statement to the press, indicating that he wanted to "leave all his options open without closing any doors," which I'm pretty confident is a redundant mixed metaphor. I think Rolen would fit really well on a team like the Pirates -- who are currently employing Brandon Inge as their backup third baseman -- or the A's -- who I'm pretty sure are starting a large bag of sand at the hot corner -- but there's probably a better chance he'll choose retirement at this point.

3. Jeff Samardzija turned down a five-year contract extension from the Chicago Cubs in the hopes that the club will offer him a larger, longer deal if he puts together a series of strong campaigns rather than just one. This is a bit of a gamble for Samardzija, who surprised everyone with his solid numbers in the Cubs' rotation last year. I'm guessing that the Epstein-Hoyer brigade went in with a low-ball offer like the one the Rays gave Matt Moore last year (though when you're talking millions, is anything really low-ball?). Given the frequency with which pitchers are hurt and the volatility of Samardzija's numbers the last few years, if I were him I would've jumped all over the chance of guaranteed money for the next half decade. For his sake, let's hope the gamble pays off.

1. The Yankees made a small trade with the Mariners yesterday, sending outfield prospect Abe Almonte to Seattle in exchange for righty reliever Shawn Kelley, whom the M's DFA-ed earlier this week. Not an earth-shattering move by any means, but it could benefit both sides in the long run.

2. The Cardinals and Adam Wainwright are still far apart in contract negotiations, but the right-hander seems to be willing to keep discussions going into the season if necessary. With Carp out, you can bet the Redbirds will do whatever it takes to lock Waino up.

3. Although manager Terry Francona seems intent on starting Drew Stubbs in right field to start the season, there are several insiders who think that the Tribe will eventually trade away the outfielder. I'm with Francona on this one. Why sell low on a guy you can't replace right now?

- Joey Votto: The King of Pop-ups

A proof: Since he joined the league in 2007, there have been more no-hitters in baseball than Joey Votto pop-ups. This is not normal. Therefore, Joey Votto is a robot.

- The Tale of Leonard: A Jeopardy! Story

For once, the Teen Tournament wasn't a whole week spent weeping for the future of humanity. An honorary mention must also go to this game.

A disabled French driver was trapped in his brakeless car -- which was going 125mph (!) -- for over an hour.

- The best Valentine's Day cards ever: 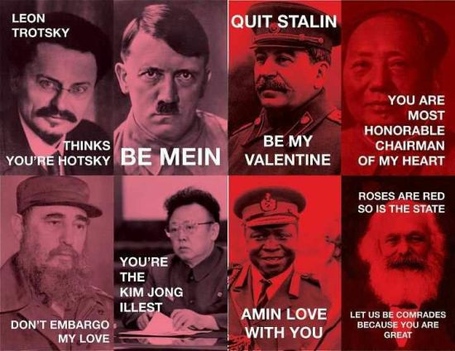 "For this was on Saint Valentine's Day, when every bird cometh there to choose his mate."