The One Where Miguel Cairo Finally Stops Playing

On this date in 1898, an explosion of mysterious origin on the USS Maine took the lives of 260 American crew members in Havana harbor off the coast of Cuba. While a Naval inquiry shortly after the incident ruled that a stray mine was the initial cause of the blast, a propaganda campaign spearheaded by newspaper man William Randolph Hearst launched the U.S. into a war path with Spain. The slogan "Remember the Maine, to Hell with Spain" swept its way around the country, forcing president William McKinley to ask Congress for a declaration of war in early April.

Today's timely trivia question: By defeating Spain in the subsequent war, the U.S. "liberated" Cuba but also gained control of three other former Spanish colonies. What were those three countries? (Answer below)

1. Besides the whole Chris Carpenter out for the season/maybe retiring stuff, things have been going pretty well for the St. Louis Cardinals of late. The 2011 World Series champs may have lost a heartbreaker of an NLCS this last season, but things are looking really good for 2013 and beyond. The club has one of the deepest -- if not the deepest -- farm systems in baseball, and seems primed for at least a few more years of residing atop the NL Central. To keep the good times going, the Redbirds extended new contracts to both their manager and general manager yesterday. Mike Matheny is now guaranteed to be at the helm in St. Louis through at least the 2014 season, and GM John Mozeliak now has a contract through 2016. With youngsters Oscar Taveras, Shelby Miller, Trevor Rosenthal, and more likely making a big impact at the big-league level this year, the Cards should be a lot of fun to watch.

2. Sources told Ken Rosenthal yesterday that Kyle Lohse is "almost certain to sign with a team soon." Well... no shit, Ken. Considering that Spring Training has begun and there's absolutely no way that Lohse goes unsigned through camp, Rosenthal could have called me and gotten that quote with 100 percent confidence. Never mind that I wouldn't have talked to anyone who knows anything about anything, it's just kind of common sense at this point. Of course he's going to sign soon, he doesn't really have any other choice. Now if you had any ideas as to where he might sign, then that's probably worth some ink. At this point, since no one seems to have any idea where he'll end up, I'm going with the Rockies as the ultimate dark horse candidate.

3. There really weren't three big things to happen yesterday, but since I'm a stickler for form I'm throwing the Reid Brignac to Colorado trade in here. Brignac was sometimes uninspiring but mostly terrible in his five partial seasons with Tampa Bay. His offensive numbers are bound to improve in Colorado, and he should find his way onto the field when Troy Tulowitzki inevitably gets injured again, so maybe he'll turn things around just yet. The Rays get cash and a PTBNL in return for Brignac, which is a whole lot better than nothing, I suppose.

1. After an inexplicably long 17-year playing career, infielder Miguel Cairo has retired to take a spot in the Reds' front office. The 38-year-old retires with 5.8 WAR for his career, good for 0.3 WAR a season. Kudos to Cairo for lasting as long as he did. No idea how he did it.

2. While it seems like the Dodgers could eventually trade one or more of their army of starting pitchers before the season begins, for the time being the odd men out -- Chris Capuano and Aaron Harang -- are prepping for a move to the bullpen. I understand the injury concerns around Chad Billingsley and Ted Lilly, but if either of them are healthy then LA has to pull the trigger on a trade, right? They can't seriously be thinking about starting Luis Cruz at third, can they?

3. The Rangers have signed an Australian outfield prospect by the name of Todd McDonald. The 17-year-old received $475k to sign with Texas, the second-highest bonus handed out to a kid from Down Under this year. Having gone there to play baseball myself a decade ago -- when the sport was just starting to really pick up -- I'm glad to see the international market expanding down there.

- Inside the Blind Baseball World Series

I had no idea this even existed. It sounds amazing and it should absolutely be added to the Paralympics next time around.

- Think you know all the neighborhoods in your city? Prove it! Play Click That 'Hood. I tried my hand at San Francisco and failed miserably. If Los Angeles had been an option, I would have dominated.

- Canadian Parliament assures its constituents that its country is prepared for a Zombie Apocalypse. Seriously:

- I have a hard enough time missing the water hazards and sand traps, now I'm expected to not hit a stampede of kangaroos? 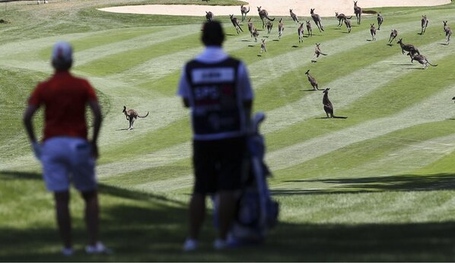 Trivia Answer: The U.S. gained colonial authority over Guam, The Philippines, and Puerto Rico, though not all Americans were happy about it. In response to the imperial power grab, Mark Twain wrote the essay To the Person Sitting in Darkness, which satirically lambasts the idea of American imperialism.