It was a busy week leading up to the official report date for position players. There were signings, extensions, scandals and more.

Thanks to the elimination of the reserve clause, Major League Baseball saw a rise in arbitration starting in the 1974 season. Since then, there have been players to have their cases heard before a salary arbitrator in every season. Until now, that is. This season marks the first time since 1974 that not a single player has gone to salary arbitration. That's 39 year of arbitration hearings before we got a season without one. We can thank the San Diego Padres and Clayton Richard for ensuring that.

Now, here's some MLB Daily Dish original content on stories that have impressed, shocked, and captivated the baseball world:

Nathan Aderhold wrote of the Cleveland Indians' surprising bargain in signing Michael Bourn. The free agent center fielder was one of the hottest targets on the market once he declined the Atlanta Braves' one-year qualifying offer. However, when the reality of giving up a first round pick to sign Bourn started to sink in, teams backed away slowly. One by one, potential suitors were suddenly no longer interested. Eventually, no one would touch Bourn with a ten-foot pole (or an exception from Major League Baseball).

Then came the bargain. The Cleveland Indians stepped in as pitchers and catchers were reporting and as spring training was about to ramp up, and signed Bourn for far less than what most people had expected early on. They lost a draft pick in doing so, but Cleveland got Bourn for $48 million. This comes after initial estimates put Bourn's potential contract for whatever teams were to sign him in the $100 million range. The Indians have Bourn for four years at what would seem like a discounted rate based on what the market was willing to pay for similar talent (B.J. Upton got $75 million). This discount came from a simple rejection of a qualifying offer and the subsequent fear of losing a draft pick.

The Felix Hernandez deal was surprising in the fact that is came from the small-market Seattle Mariners. The team agreed to a contract extension over seven years that would pay Hernandez $175 million. The contract makes him the highest-paid pitcher in baseball history. But there are concerns. The deal was stalled over potential elbow concerns, and as Bill Parker points out, Hernandez has pitched a lot of innings.

Rather than summarize Parker's piece entirely, here is a chart he provided of innings-pitched by a pitcher through age 26. It pretty much tells the story. 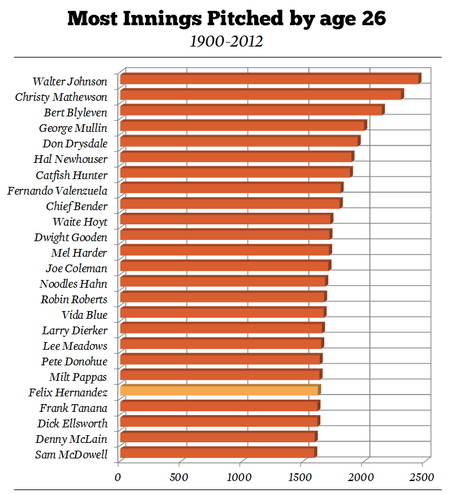 Hernandez is a great pitcher. He could mean the difference between the Mariners staying in the cellar and climbing their way into contention. But that can only happen if he stays healthy.

Conversion of a Fireballer

Converting bullpen pitchers to starters is always a risky proposition. The two roles couldn't be more different. The only similarity is the fact that both relievers and starters stand on a mound 60 feet, six inches away from a batter and throw a ball. Marc Normandin explored the trend of converting successful relievers into starters and the complications teams may face - including the Cincinnati Reds who are converting Chapman this year.

There have been mixed results for teams converting relievers to starters, but Normandin used some of Nate Silver's research in creating a cautionary tale for the Reds and Chapman. The Reds had previously intended on using Chapman in a starting role, then they slotted him as their closer last season when Ryan Madson went down. Chapman simply dominated. Now, as a starter, he will likely see a jump in ERA and other complications. But that doesn't mean he can't be successful.

Let Them be Heard

Many of the players linked to the Biogenesis scandal spoke out this past week. And some of them had teammates speak out for them. I covered all the recent statements (and lack thereof in some cases) here.

The scandal will continue as long as Major League Baseball continues its investigation and more names continue being released. As it stands now, there are a lot of fingers being pointed, but not much concrete evidence. Sure, the names in ledgers are pretty damning, but no player has admitted publicly to being provided PEDs at the clinic. Until that happens, MLB's investigation may not get very far.