Today we have more Biogenesis shenanigans to catch you up on (Gio is clean! Maybe!), some dirt on when Alfonso Soriano might actually leave Chicago, and yet another rejection for Kyle Lohse. We've also got the Brewers rifling through the first base bargain bin, a few possible extensions (Cano/Waino/Walkero) to keep an eye on, and the options for a troubled reliever in Boston.

Lastly, we've got some gaming/tech stuff for discussion.

1. ESPN's dynamic duo of TJ Quinn and Mike Fish were at it again last night, clearing Gio Gonzalez's name -- at least informally -- by reporting that all the substances linked to the Nats' ace were legal drugs. The Outside The Lines pair also dropped five more names into the widening Biogenesis pot. The new handful of players all seem to fit either the Freddy Galvis mold of PED links -- i.e. "Really? Them?" -- or the Jason Grimsley "Who the hell is that guy?" mold. Once again, rather than purchase receipts or shipping details, we have a source who claims that names written in a notebook next to monetary figures is an indication that they "received performance-enhancing drugs." Any list allegedly scribed by Anthony Bosch is probably not a good one to be on, but names and dollar figures alone don't make anyone guilty of anything. Case in point: 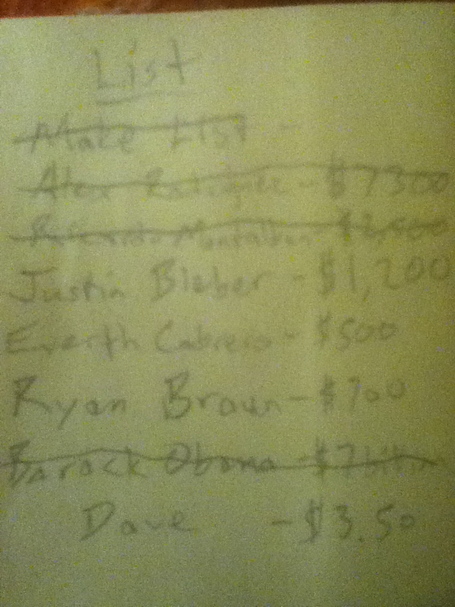 I just wrote that. Does it mean those guys used PEDs? Not even close.

2. Alfonso Soriano told a reporter yesterday that he'd be open to a trade this season, but only if two specific conditions are met: 1) The Cubs have to suck, and 2) it has to be one of "six or seven" teams in the "east or center" that he's given the OK on. So... pretty much Soriano's going to be traded, you guys. The Cubs aren't going to suck quite as bad this year, but they certainly won't be in contention in the NL Central, where the Reds and Cardinals currently hold sway. As to who the six or seven Soriano-approved clubs are is anyone's guess. He apparently vetoed a potential deal to the Giants last year because it was too cold in the Bay. What Midwest or East Coast city isn't colder than San Francisco is anyone's guess, but apparently Soriano has a few in mind. Perhaps Texas? Florida? Atlanta? In any case, we'll probably find out by June or July.

3. So now's about the time when Kyle Lohse starts thinking about getting a new agent, right? Put another team on the growing "not interested" list, as the Pittsburgh Pirates have made it known they're not in the running for the right-hander. It's almost to the point now where Lohse probably would have benefited greatly by putting up worse numbers in 2012. Not only would he have avoided a qualifying offer in that case, but teams might have been more open to adding a guy with the reputation as just an innings-eater, rather than as an innings-eater who could potentially be a staff ace or could regress like crazy. I'm pretty certain that Lohse is now pretty much resigned to taking the Edwin Jackson approach of signing a one-year deal somewhere and hope to have better luck next year.

1. As expected, the Brewers are scanning the first baseman market for anyone who might be able to bridge the gap to Corey Hart and completely suck while doing so. The club is NOT in on DFA-ed 1B Mike Carp, however -- perhaps because another club got the waiver claim? -- and seems to prefer going with an in-house option for now.

2. Several players are potentially in line for contract extensions this spring, though no one seems close to a deal at this point: the Yankees are being hesitant with Robinson Cano, the Bucs have yet to breach the topic with Neil Walker, and the Cardinals are on "pause" in their discussions with Adam Wainwright.

3. Alfredo Aceves sure knows how to make a good first impression. The right-hander was scolded during his first live batting practice session over the weekend for lobbing pitches in to batters, which has started the wheels on the "what the hell do we do with this guy?" wagon. I sincerely doubt he makes it out of camp with Boston.

So yesterday's Tuesday Tunes went well, so let's give another theme a try. Today is Wired Wednesday, which is a space for cool/interesting gaming and/or tech stuff that I find while wandering the web. (I promise that every day won't be alliterative).

Much like with popular music, I've been out of touch with the gaming world for quite some time (apparently I don't do anything fun anymore :( ). There was a time when I owned just about every console out there (Oh, Sega Dreamcast...) and would spend hours upon hours gaming in my parent's garage, then my dorm room, and eventually my shared apartment.

About three quarters of the way through college, as I finally became conscious of that nebulous thing people refer to as a "budget," I became painfully aware of just how damned expensive video games were/are and essentially cut them out of my spending completely.

Now a few years later I still own an N64, which I'll fire up from time to time, but I'm woefully ignorant of anything new and exciting in the gaming world. I think there's a new BioShock game coming out at some point? Fill me in:

1. What console/desktop game are you most looking forward to this year?

2. What's the best game you've gotten your hands on in the last few years?