Today we’ve got Curtis Granderson breaking things, the Phillies freeing up roster space, and some dirt the Dodgers looking to do the same. Also, we've got the Rockies shopping for pitching, the Bucs signing an old guy, and another Mets reliever going down.

Finally, a brief discussion on the Oscars and everyone's favorite actor, Nicolas Cage.

1. I'm sure many have tried, but it's got to be hard to start Spring Training action any worse than Curtis Granderson did yesterday. In his first at-bat of the pre-season, the Yankees left fielder took a second-pitch fastball from J.A. Happ off his right forearm, which fractured Granderson's ulna (probably?) and will sideline him at least until early May. The Yankees have Matt Diaz, Juan Rivera, and an old hat as possible replacements for Granderson, which I suppose could be worse. There's an outside chance that the Bombers will get active on the trade market and acquire someone like Alfonso Soriano or Vernon Wells, but the fact that both players have two years remaining on their contracts makes it pretty unlikely. More probable is the signing of someone like Scott Podsednik or Johnny Damon, who can patrol left field while Granderson is away, then get released back into the wild with no hard feelings when he returns.

2. The only moderately exciting roster move of the weekend was a trade between the Phillies and the Blue Jays. Philadelphia sent right-hander Michael Schwimer -- who is still contemplating filing a grievance against the Phillies for their treatment of him last season -- to Toronto in return for minor-league first baseman Art Charles. Schwimer has just 48⅔ big-league innings to his name and Charles has yet to play above Low-A ball, so it's not likely this move will make much impact on either side, but Schwimer could be nice insurance if the Jays run into more of the same pitching injury troubles that have plagued them the last few seasons.

3. The Dodgers have finally come to the realization that perhaps eight starting pitchers might be too many, and have begun shopping southpaw Chris Capuano. Glad you could join the rest of us, Ned. Better late than never. The Colorado Rockies are the only team that have been reached out to thus far -- that we know of -- but the list of likely landing spots is likely to spread as Opening Day draws nearer. The 34-year-old Capuano is owed $6 million this season and has a mutual option for 2014, so no one will need to break the bank to acquire him. I think he'd be a solid pick-up for a fringe team like the Royals, but we'll see what happens.

1. The Rockies aren't just thinking about Capuano, they're also inquiring into Rays right-hander Jeff Niemann. Tampa Bay is somewhat thin on starting pitching, so unless the Rockies seriously overpay, don't expect this one to happen.

2. The Pirates signed 41-year-old right-hander Jose Contreras to a minor-league deal over the weekend, giving the veteran a shot at an 11th big-league season. With just 17⅔ thrown the last two years, Contreras' chances at a roster spot don't look great.

3. The Mets got some more potentially troubling news for their bullpen. First Frank Francisco went down and now left-hander Pedro Feliciano has been diagnosed with an irregular heartbeat and shut down indefinitely. The Mets still have several bullpen options, but things will start to look pretty bleak if another arm goes down.

After weeks of way too many editorials about the Oscars, the actual awards finally happened.

Argo took home the Best Picture award last night, proving that it's totally fine to have gross historical accuracies in your movie so long as the event in question occurred a few decades ago (sorry, ZDT). Daniel Day-Lewis won his third Best Actor trophy because he's freakin' great at what he does, and Tarantino snagged another screenplay award for largely the same reason.

But enough about (mostly) good films. The big movie news that I want to talk about concerns one of the most anticipated and most questionable films of 2014, Nicolas Cage's newest venture into schlock. 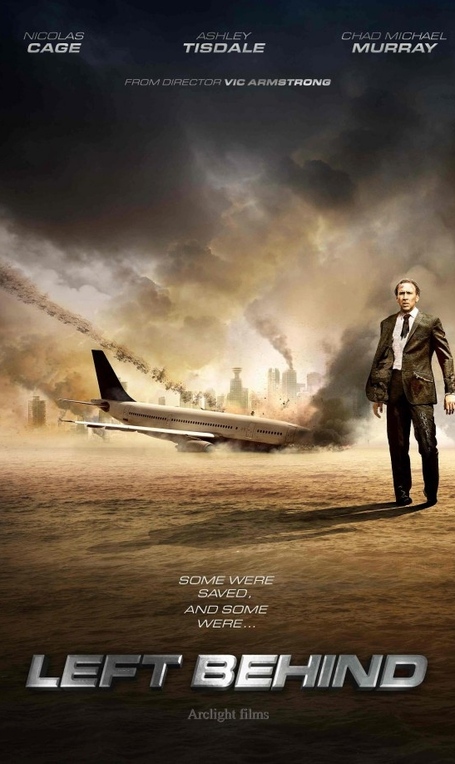 Just glorious. Where to even begin dissecting this...

How far does one's star have to fall before s/he agrees to be in the remake of an awful, eschatological Kirk Cameron (!) movie based on a baffling interpretation of the book of Revelations? (Back taxes are a pain, you guys.) That the movie also "stars" that one white girl from High School Musical and the white guy from One Tree Hill is just icing on the cake of terrible.

So, naturally, count me in for opening night.

NB: What the hell is going on with Nicolas Cage's (lack of) feet in that poster? Do feet just disappear when the Rapture happens? Is that a thing? Also, ties don't just cut in half.

Anyways, the point of all this -- other than to share this amazing bit of news -- is to ask the following:

What is the best worst movie you've ever had the pleasure/horror of watching?