I hope you enjoyed your Super Bowl Sunday wherever you ended up celebrating, and aren't regretting it too hard this morning.

Congrats to the Ravens on their victory. I didn't watch a single minute of the game or its hours of pre-festivities, but I imagine there were enough of groin shots, talking babies, bad pop music, and misogynistic beer/car commercials to make it one to remember. Perhaps some football happened as well. Americana! Oh, I almost forgot the rampant sex trafficking.

Anyways, more than anything the end of football season signifies that it's FINALLY time for baseball.

1. This is more of a Friday morning story than a weekend thing but I haven't had the chance to sound off on it yet, so I'm throwing it in here. Anthony Bosch, the mind behind BALCO East, was allegedly A-Rod's personal steroid injector guy and would come to the third baseman's house late at night to do the deed. The story, while incredibly damning, is not without its fair amount of weird and questionable information. The ESPN report quotes a source "close to Bosch" who says that A-Rod once got really mad at Bosch for having "trouble locating a vein" and that Rodriguez was "bleeding everywhere." I'm not quite ready to call bullsh*t on this whole thing quite yet, but PEDs of all kinds are most definitely NOT injected into the bloodstream. Why? Because that ish can kill you. A quick search on Google reveals a myriad of warnings on forums from steroid junkies informing noobs to "aspirate" -- i.e. pull back a tinge -- before injecting so as to ensure you're not hitting a vein -- because it can kill you. There are practical reasons for Bosch to poke A-Rod's arm(?) veins -- for a blood sample, perhaps -- but there's also a whole host of stupid reasons too. Could it be that Bosch legitimately thought PEDs were supposed to be intravenous? Well, he's not a doctor and he was dumb enough to keep hand-written notes with players' names AND pseudonyms right next to each other, so I'm not ruling it out.

2. Contrary to several reports two weeks ago, left-hander Francisco Liriano is still not an official member of the Pittsburgh Pirates. It was thought the southpaw -- who broke his non-throwing arm over the holidays -- had renegotiated his contract with the Bucs and was just awaiting a final physical, but that is not the case. GM Neal Huntington said their conversations were ongoing, but alluded to the possibility that the club may not sign Liriano at all. If that were to happen, the left-hander would be a very cheap commodity back on the open market, and the Bucs would be on the hunt for a veteran starter to fill out their rotation once again. I can definitely see Pittsburgh swooping in and signing Joe Saunders in Liriano's stead.

3. Daisuke Matsuzaka is drawing interest from the Houston Astros and New York Mets, so don't expect his next contract to break the bank. It's been a rough four years for Dice-K since his stellar 2008 campaign, and there's no guarantee that his MLB career isn't at an end. Any deal he signs, even if it's with the Astros, is likely to be of the minor league variety, so there's always the chance he decides to head back to Japan rather than try to work his way into a rotation. The right-hander looked pretty terrible during his short return from Tommy John surgery last season, so don't get your hopes up that he'll choose to stay.

1. The Mets are closing in on a deal with veteran reliever Brandon Lyon. The right-hander would be the third bullpen arm headed to New York in the last week, joining LaTroy Hawkins and Scott Atchison.

2. Kevin Millwood has decided to call it quits after 16 seasons of big-league ball. The big right-hander had a few great seasons interspersed with a lot of mediocre ones, twice coming in the top 10 in Cy Young voting but posting an earned-run average under 4.00 only four times overall.

3. Jason Giambi is among several aging sluggers still hoping to land with a team before spring camp breaks. The 42-year-old is unlikely to get anything more than a minor-league deal at this point, so perhaps he and Jim Thome will decide to just open a restaurant together or something.

- The best tweets of the Super Bowl blackout. My fave is definitely #29: 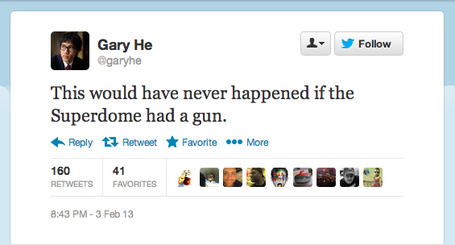 - Archaeologists have found the remains of King Richard III under a parking lot in the Midlands. Because of course.

- How to decode facial hair in the Arab world. Best line: "I looked like fat Freddy Mercury."

- Iranian president Mahmoud Ahmadinejad says he is ready to be the "first Iranian in space." What's the over/under on him getting stuck up there?