Ryan Braun has been linked to records from the Biogenesis clinic, according to a report.

UPDATE 2/6 10:30 a.m. ET: Ryan Braun's attorney, David Cornwall, released a statement about his interaction with Tony Bosch to Jeff Passan at Yahoo Sports, stating that he found Bosch's value as a consultant "negligible" :

"Bosch was introduced to me at the earliest stage of Ryan's case.

"I found Bosch's value to be negligible and, thereafter, I followed my prior practice of relying on Aegis in the preparation of Ryan's winning defense."

That Cornwall contacted Bosch early on and that he didn't find him useful is a pretty solid explanation for why Bosch was not officially listed as a consultant on Braun's appeal case.

UPDATE 2/6 10:00 a.m. ET: While Braun has stated that Anthony Bosch was used only as a consultant in his appeal last season, the Biogenesis head was not officially listed as an expert or consultant in the case, a source has told reporters at the New York Daily News:

One source familiar with Braun’s appeal said Bosch was not officially listed as an expert or consultant in the case.

As far as I know, there was no requirement for Braun to list every person consulted during the course of his appeal, so this may end up signifying nothing. But it is still worth making note of for now.

UPDATE 9:56 p.m. ET: Braun has issued a statement on the report. In the statement Braun says that he consulted Bosch when preparing for his appeal last year, which is the reason he shows up in the "moneys owed" list.

Braun finished the statement by saying the following:

“I have nothing to hide and have never had any other relationship with Bosch.

“I will fully cooperate with any inquiry into this matter.”

The report says that Braun was not listed next to any specific PEDs like A-Rod and others were, but his name showing up on the list makes it likely he took PEDs from the clinic.

The list also included Yankees catcher Francisco Cervelli and Orioles third baseman Danny Valencia, but neither of those players has ever been linked to PEDs before. 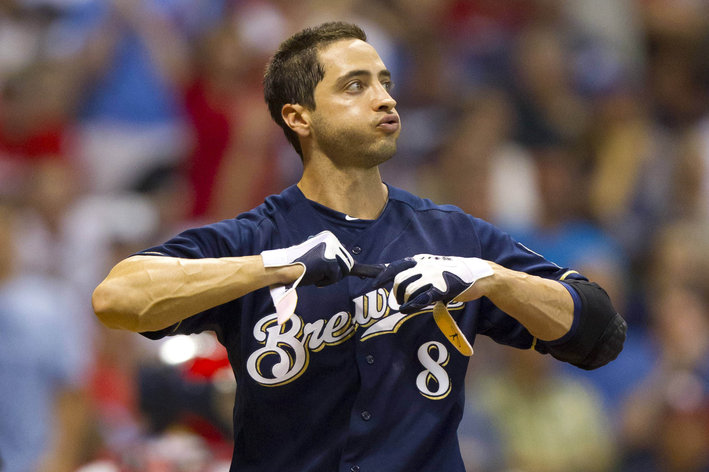 Moments after we talked about how Ryan Braun was having a quiet offseason, now he's not.

In February 2012, Braun won an appeal of a 50-game suspension levied after testing positive for elevated testosterone in October 2011. Braun argued in the appeal that chain-of-custody protocol had not been followed, not that the test results were inaccurate.

This news is certainly going to start a stir about if Braun should lose his MVP award, so that will be an interesting situation to monitor.

The document mentions a dollar amount that Braun may owe the company, and it also mentions Chris Lyons. Lyons was one of Braun's lawyers during his appeal case. Braun has denied any use of PEDs.