The One With The Smoking Gun And ESP.

Happy Wednesday, everyone. It's all downhill from here.

I'm still figuring out what to do with this intro part from day to day, so today you get a little factoid. Most (probably all) of the U.S. and Europe operate on a Monday-Friday workweek, so Wednesday is considered midweek or "hump day." In much of the Arab world however -- like Jordan, where I live -- the workweek is Sunday-Thursday because Friday is the Day of Gathering (yom al-jomma), when Muslims congregate at their mosques for a special noon prayer and a sermon (khutba). So, "hump day" here is actually Tuesday. [Musical cue]

1. Oh, man. Lots of "I told you so!" and whatnot going around this morning as word has surfaced that Ryan Braun's name shows up at least twice in Biogenesis kingpin Anthony Bosch's personal notebooks. While I'm sure many are ready to pull their "Braun's a Cheat!" posters and t-shirts back out, let's not call on the cavalry just yet. There is absolutely no mention of Braun anywhere near a mention of drugs of any kind, unlike the other six players implicated in the report. Yes, there is a chance that Braun is involved in the PED shenanigans, but at this point there's just as good a chance that he isn't. As much as we may want it to, guilt cannot be inferred merely from the company one keeps. Braun and his reps have released a statement saying that their only contact with Bosch was as a consultant during the PED appeal process last year, and that the outfielder will cooperate willingly with the MLB investigation. As Jeff Passan notes, even if it is determined that Braun used Bosch just for consulting, that alone could be the nail in the coffin for the other players involved in the scandal. So far as we know right now, the entire content of the notebooks could be an elaborate ruse (LOLs). But if Braun confirms their veracity by acknowledging his mentions in the notes, then the other players are royally eff-ed.

2. Speaking of elaborate ruses... the New York Daily News continued their top-notch reporting on the PED scandal yesterday, writing that anonymous sources had tipped them off to A-Rod's current psyche, and that the veteran third baseman is "scared" and believes that this whole episode may be a plot by MLB and the Yankees to bring him down. So, essentially, either A-Rod has a form of Truman Show syndrome or this is bad reporting. It's not that I doubt that sources told the Daily News these things -- I'm sure they did -- it's that the publication decided to run with the information without questioning it even once in the article, and without giving any indication to their readers who the sources were in relation to Rodriguez. For all we know right now, this info could be coming from the guy he orders sandwiches from at Subway. In other A-Rod doping news, his alleged pattern of drug use has been revealed.

3. The St. Louis Cardinals announced in a press conference yesterday that right-hander Chris Carpenter has suffered a major setback in his offseason throwing program and that he may miss the entire 2013 season. Not only that, but the right-hander is giving serious thought to retiring from baseball completely. Carp's entire career has been a tale of season-ending injuries bookended by elite campaigns, and it's sad to see that he's finally come upon an injury from which he may not be able to work his way back. If thoracic outlet syndrome is even half as painful and gruesome as it sounds, then it's amazing he's attempted to make a comeback as long as he has.

1. Manny Ramirez may be headed to Taiwan to play with the EDA Rhinos in the Chinese Professional Baseball League. Manny-being-Manny in a bright purple uniform? Sign me up.

2. The Mets are still in discussions with free-agent outfielder Michael Bourn, but are believed to be years apart on a deal. Meanwhile, Kyle Lohse still has zero offers from anyone, not even the Cardinals sans Carpenter. Poor Kyle.

3. The Giants have re-signed right-hander Ramon Ramirez, in essence completely nullifying the winter 2011 trade that sent him and Andres Torres to the Mets. Just a year later, the Giants now hold claim to all three players involved in that deal.

- Many Days in the Life of a Minor-League Broadcaster. A great look inside the world of the PCL. 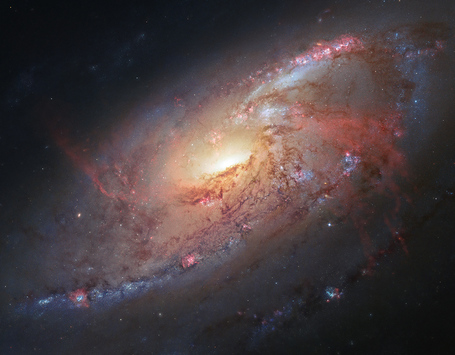 This isn't just any old spiral galaxy, either. Check it:

You see those red frills, streamers of gas at odd angles to the rest of the galaxy, one each on opposite sides of the galaxy’s core. These are called its anomalous arms, because they don’t line up well at all with M106’s more obvious spiral arms...

It turns out, that gas is being zapped by twin blasts of energy coming from material being voraciously consumed by the galaxy’s supermassive central black hole.

I know. It was cool just writing that sentence.

- Not impressed by that pic? How about this one: 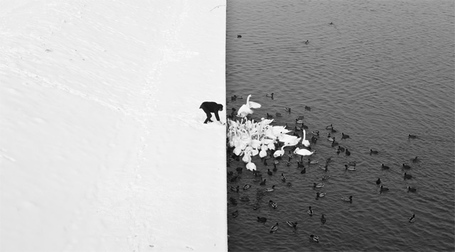 Feeding swans has never been cooler. Talk about being in the right place at the right time.

h/t This is Colossal

- I'm not really a big fan of Jeremy Clarkson when it comes to anything beyond Top Gear -- some might describe him as a bit of a knob -- but he's freakin' hilarious on the show. Here he is testing out the world's smallest street-legal car: