The One With The Liquidation Sale And The DUI.

Yesterday we went with a factoid, today I thought I'd try a bit of timely historical trivia. On February 7, 1964, "Beatlemania" officially hit the States as John, Paul, George, and Ringo landed in New York for the first time. The Fab Four would make their historic performance on the Ed Sullivan Show two nights later -- which Ed really seemed rather displeased by, if I do say so -- and then went on to hold shows at the Coliseum in D.C. and Carnegie Hall back in NYC before heading back to England.

Today's trivia questions are: How many Americans tuned in to the Beatles' debut on the Ed Sullivan Show? And what percentage of the population was that at the time? (Answers at the bottom of the post.)

1. Two more players were discovered to have ties to the Biogenesis clinic yesterday: Mariners catcher Jesus Montero and Tigers shortstop Jhonny Peralta. Since the original "PED Six" were revealed last Tuesday, five more MLB players have been linked to the scandal: Ryan Braun, Danny Valencia, Francisco Cervelli, Montero, and Peralta. Unlike the "PED Six," not a single one of the newly-named players are explicitly linked to PEDs in any way in Tony Bosch's notebooks (which is probably why those names were omitted from the original report). Of the five new guys, three (Valencia, Montero, Peralta) have issued denials not only of drug use, but also of having anything at all to do with Biogenesis. Braun and Cervelli, on the other hand, have admitted to working with Biogenesis in some capacity, but not for anything illegal. Interesting to note in all of this is that the three players named in the report who have tested positive for PEDs -- Bartolo Colon, Melky Cabrera, and Yasmani Grandal -- have been completely silent since the news broke.

I think it sucks for the guys tied to the clinic who have nothing to do with PED use, because no matter what happens some people are going to forever link their names with wrong-doing. Good on the Miami New Times for showing restraint and only releasing the names they were certain has connections to shady activity. A wag of the finger at the outlets who went forward with the other names.

Speaking of the New Times, Major League Baseball is doing their darnedest to get the publication to turn over their notes, but at present the newspaper has declined to do so. Meanwhile, at least two other publications have gotten their hands on the notebooks. Good investigating, MLB! Top notch!

2. With less than a week to go before camp opens, the Houston Astros still have four players on the roster with salaries over $1 million, which for them appears to be four players too many. Houston sent shortstop Jed Lowrie packing on Monday, and now the club has made their next highest-paid player, right-hander Bud Norris, available to interested clubs. I may be a bit biased as an Angels' fan, but I think it's fantastic that Jeff Luhnow is determined to put a Triple-A squad on the field for 2013. If you want to try to rebuild from scratch, why not just get rid of everybody that anybody has heard of and use all of your resources on scouting and development? It's insincere and a complete waste of money to give fans and opposing teams the illusion of competitiveness -- looking at you, Royals. If you're going to do it, sell the whole farm and just spend all your time looking towards the future. At least then you can be honest with your fan base.

3. The Giants bought out closer Sergio Romo's final two years of arbitration yesterday, agreeing to a two-year, $9 million deal with the right-hander. With Brian Wilson likely out the door, San Francisco's NL West rivals are going to have to learn to Fear the New Beard. San Francisco has now locked in just about every single player (poor Aubrey Huff) that helped them win the World Series title last year, and has also brought back a few guys -- Ramon Ramirez, Andres Torres -- from the 2010 season as well. Not really sure what Brian Sabean's line of thinking is there, but I guess I'll give him the benefit of the doubt on this one. He does after all have two more World Series rings than I'll ever get.

1. The New York Mets still seem set on the idea of signing Michael Bourn. There's nothing quite like throwing tons of money into a long-term deal for a player when your team isn't competitive to make the fans happy. Oh, is that not what happens?

2. Rockies first baseman Todd Helton was arrested yesterday on the suspicion of driving under the influence of alcohol and, as expected, the baseball morality police gave a collective "meh." Now, if he had been drinking AND doing steroids on the other hand...

3. Russ Canzler was claimed on waivers for the fourth time in three months yesterday, this time by the Orioles. If I were him, I think I'd start developing a complex at this point.

- The story of a Stay-At-Home Dude. No kids, no job, no problem.

- This may be the best thing I've seen on the internet in some time. One of the animators at Pixar decided to do sketches on the 2012 NFL Season, and they're fantastic. Click the link to view them all. Here's two of the best: 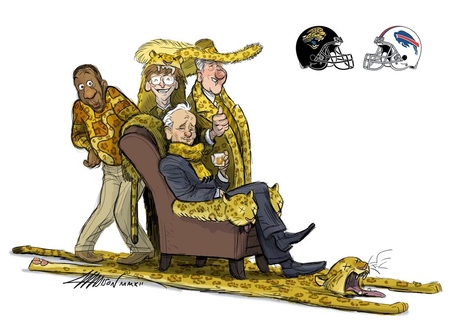 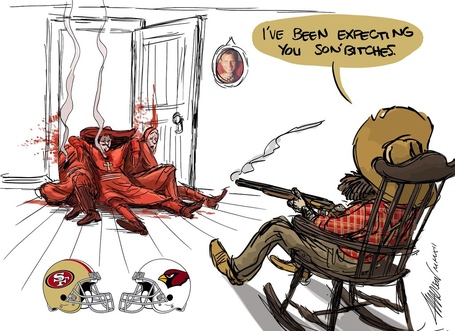 Trivia answer: An estimated 73 million people turned their dials to CBS that night to get a first look at the Beatles -- about 40 percent of Americans.