Happy Friday, all. The weekend is so close. Hang in there.

Today we have dirt on the Yankees disregarding the luxury tax threshold again, the Dodgers looking to send their eighth man out, and then head back to New York with rotation injury concerns. Also, an update on maimed Mets, a Cubs trade candidate heading back out to the mound, and the Angels outrighting a ground-ball machine.

Lastly, a brief discussion on the possibility of a real-life Jurassic Park.

Hold on to your butts...

1. Yankees GM Brian Cashman admitted yesterday that New York has made a "significant" contract offer to second baseman Robinson Cano. It seems pretty likely that any and all talks with Cano will cease to be when the regular season starts, so the club now has exactly a month to play the waiting game with the guy they hope will be their next franchise player. What I keep coming back to in this is how Scott Boras probably had the idea that the Bombers would make an offer like this during camp, and so planned to handle all his free-agent clients by March and give Cano his undivided attention. Oh, the best-laid plans... Now that Boras still has Kyle Lohse and Jose Valverde to worry about, one wonders how much time he can afford to spend negotiating with the Yankees over the next month. I'm a firm believer that the two sides will get an extension done, I just don't think Boras will be able to squeeze out as much as he could have with an empty slate.

2. I've been mulling for over a week now on a joke/play-on words about the Dodgers, their eight starting pitchers, and the book/movie "Eight Men Out." Still drawing a total blank. Maybe it's just not there... [cue segue] Speaking of not being there, Aaron Harang is likely on his way out of the Dodgers' organization. Manager Don Mattingly told press yesterday that he doesn't see the veteran right-hander as being an effective bullpen arm -- to paraphrase liberally -- which really leaves Harang with no options for playing time in LA (wait, can he play third base?). If you had asked me last month who of the Elysian Park Eight would be traded, I would have put my money on Chris Capuano: he's a southpaw, had arguably the best 2012, and is owed the least. But, it looks as though Cap (and Ted Lilly) are bound for bullpen duty to start the season, leaving Harang the eighth man out (!). Nailed it.

3. Because the Yankees are woefully underrepresented by the West Coast-biased, conservative national media, they get two spots in the Big Three today. No. 4 starter Phil Hughes was diagnosed with a bulging disc in his back last week and may be forced to start the season on the disabled list as a result. While Hughes' injury raises some serious concerns about the lack of depth in the rotation -- the club has really no one to turn to beyond David Phelps -- New York reiterated yesterday that they have no intention of pursuing free-agent right-hander Kyle Lohse, despite Scott Boras' best efforts to make it so. Maybe Boras can make signing Lohse a condition of the inevitable Cano extension? Is that allowed?

1. The good news for the Mets is that Frank Francisco, Daniel Murphy, and Pedro Feliciano seem to be mostly OK. The concerning news is that Shaun Marcum and Johan Santana are still being held out of the rotation for "conditioning-related" issues. There's a good chance that the Mets are just being overly cautious with the top two in their rotation, but there's always that inkling in the back of the mind that perhaps they're just biding time before announcing an injury. Hoping for the former.

2. Matt Garza hasn't tossed a baseball since straining his side during his first throwing session on February 17, but that should change today. The right-hander has been cleared to resume throwing and is expected to be ready to go by the time the season begins. I'm calling at least one more injury before he's dealt at the deadline.

3. The Angels outrighted righty reliever Bobby Cassevah off the 40-man yesterday, which really isn't very newsy except for this... I really hate referencing myself on anything, but I wrote last year about how Cassevah has the potential to be the GOAT ROOGY, and I still believe it.

So, the TED 2013 conference is happening this week in Long Beach, California. No matter how you feel about the substance of TED talks -- I'm pretty ambivalent about the oversimplification of the world inherent most of them, myself -- some of the ideas presented are undeniably cool, especially when it comes to the science side of things.

But then there are the terrifying ones...

The ghost of John Hammond appeared in Southern California on Wednesday in the form of eco-writer and activist Stewart Brand. In his talk Brand outlined how scientists are developing the ability to reassemble the genome of extinct animals, which will allow them (the scientists) to bring various species literally back to life. First up: the carrier pigeon, which delivered it's last message as a species in 1914.

I wasn't at the talk, but I imagine the talk looked a little something like this:

I really thought we had learned not to fuck with natural selection. Perhaps Jurassic Park IV will do the trick?

Putting the inevitable doom and gloom scenarios aside for a minute, I ask this:

What extinct animal would you most like to bring back?

My vote is for recreating this guy, though I'm pretty sure they'd need a Rare Candy to make that work: 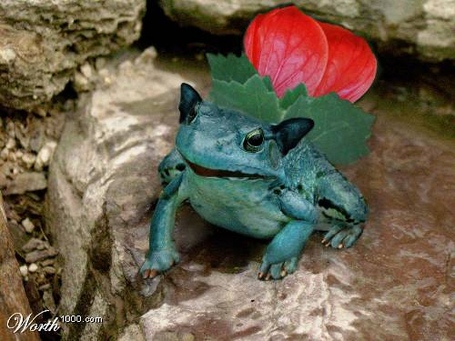