The trade rumors are still swirling around Chase Headley. Despite the Padres weak attempts to deflect the talks, a trade seems imminent. This and much more with the NL West rumors and news.

So you don't put much stock in small sample sizes, huh? Well, San Diego Padres' GM Josh Byrnes apparently does. His reasoning for claiming the team is not looking to trade Chase Headley right now stems back directly to two months worth of stats. And if a Major League GM says it, that means it's true. So quick, go catch up on all the small sample size stats you can find - wait, do it after you read this.

Here are your National League West news and notes: 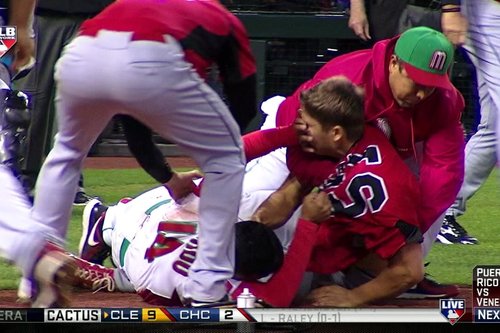 This wasn't your grandmother's baseball brawl. This was a full-on fight.

You're a small market team who simply can't afford star power hitters. But wait, you have one developing right inside your clubhouse, on your field even. He's affordable and under team control. What do you do? If you're the Padres, it seems you do nothing.

Matt Kemp had an injury-plagued 2012 season (the very same season in which he predicted 50 home runs and 50 steals for himself). Now, as we enter the middle of spring training, the Dodgers and Kemp are still taking things easy. The moral of this story? Don't make predictions. You'll just look like a fool.

Beyond Matt Kemp's injury concerns, there were some other new-worthy topics coming from the land of the blue. The Dodgers have some injuries to contend with and some controversy to figure out.