David Wright has been diagnosed with an intercostal strain and his ability to play Opening Day is in jeopardy.

Blame it on the World Baseball Classic all you want. The fact is, David Wright would have been swinging a bat regardless of whether he was doing so in the WBC or in spring training. In fact, he may have been swinging more frequently (like every day) if he had been with the Mets instead of Team USA. Regardless, the Mets' third baseman is now dealing with an injury he's keenly familiar with, and his recovery time could range from two weeks to four months says Dr. Robert Glatter of Forbes.com.

Dr. Glatter says Wright's injury is similar to that of Mets' second baseman Dan Murphy. Murphy has been out a month already with the injury. The fact that Murphy's intercostal strain is taking longer for him to recover from is concerning. The same thing could easily happen with Wright who suffered a tear in the rib area last spring. Dr. Glatter says the injury in its most minor form should only take 2-3 weeks to recover from. However, if Wright suffered a tear (like he did last year), he could be out 3-4 months. Wright managed to come back from his muscle tear last spring in just over a month. It's not clear whether he will be able to return as quickly from this injury. 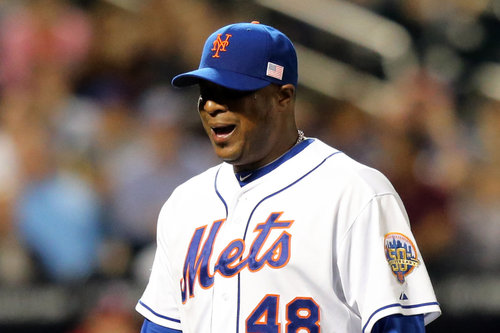 The Mets are faced with ongoing concerns about Francisco's elbow problems.

Terry Collins, the Mets' manager, has already said Wright may end up on the DL to start the season. He will continue to be evaluated, but Wright is returning to Florida to be with the Mets at their spring facility in Port St. Lucie. Adam Rubin of ESPN New York says Wright is supposed to arrive tonight. More should be known after his arrival.

Wright is a fixture in the Mets' lineup. Without him, the team is decidedly worse off. New York is working on turning itself back into a competitive club, and Wright will be key in the goal. However, this rib injury could hinder Wright's production going forward this year. It wouldn't be the first time an injury healed enough for a player to play, but the lingering affects caused reduced production. Fortunately, that did not seem to happen with Wright last year. After his muscle tear, Wright went on to play in 156 games and hit .306/.391/.492.

One thing to consider is that Wright seems to bounce back well from injuries. He is Captain America, after all.