Yankees rumors: Mark Teixeira out until June a possibility

The New York Yankees will be without their first baseman until the end of May or beginning of June based on Teixeira's own estimation.

Share All sharing options for: Yankees rumors: Mark Teixeira out until June a possibility

When Mark Teixeira's wrist strain was originally diagnosed, the thought was he'd miss a week at most. Unfortunately, the injury was more severe than originally thought and he was projected to miss 8-10 weeks. Now, after Teixeira has had time to digest the injury and begin his road to recovery, we get a timetable from the slugger himself.

According to Merredith Marakovits of the YES Network, Teixeira is not completely sure about his return, but he thinks he'll be out until the end of May or beginning of June. That lines up well with the initial estimation, but if Teixeira's injury pushes him any further into June than the beginning of the month, he and the Yankees could be in trouble. Teixeira has rejoined the team in Tampa and will start his rehab, but until he is able to swing a bat again, Teixeira's exact return date can't be known.

Cubs, Samardzija not close on extension 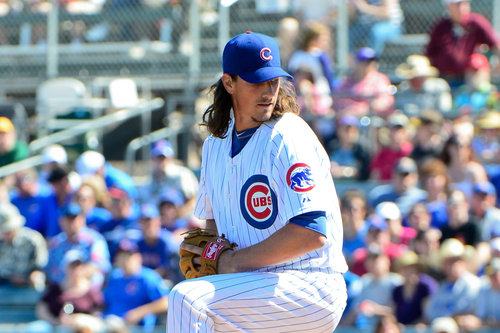 The Cubs want to extend Jeff Samardzija but the two sides have been unable to close the gap on an extension.

Marakovits stressed that Teixeira is hopeful for a May return, but he and the Yankees are not going to rush him back. Last season, Teixeira rushed back from injury and landed right back on the bench when he re-aggravated it. The Yankees can't afford to lose Teixeira again once they get him back this season.

New York has been searching for short-term replacement options while Teixeira works on his recovery. They haven't pulled the trigger on anyone outside the organization, but they are exploring internal candidates as well. On Friday, the Yankees signed Brennan Boesch to help ease the stress in the outfield with Curtis Granderson's injury. They may do something similar for first base.

While Teixeira sits, the Yankees will be without a major power source. He hit 24 home runs in 123 games last season. In his Major League career, Teixeira has hit 338 home runs. Beyond the bombs, Teixeira is simply a good hitter in the middle of the lineup. In his career, he's hit .279/.369/.527.

It'd be easy to try to rush Teixeira back when talking about his level of production over the years, but the Yankees are going to be smart about this injury.