Milwaukee may be St. Louis' last, best hope for getting that draft-pick compensation they've been waiting for.

It's beginning to appear less and less likely that free-agent right-hander Kyle Lohse will have a new team come Opening Day, though the Milwaukee Brewers may not be completely out of the running.

General manager Doug Melvin has said many times that the club is not actively looking to sign the right-hander, but Milwaukee won't really be out of the picture until Lohse signs elsewhere, speculates Tom Haudricourt of the Milwaukee Journal-Sentinel:

I have been asked many times in recent weeks if I think the Milwaukee Brewers will sign right-hander Kyle Lohse, and my response has been the same each time.

I will believe the Brewers are not going to sign Lohse when I hear he has signed with another club. 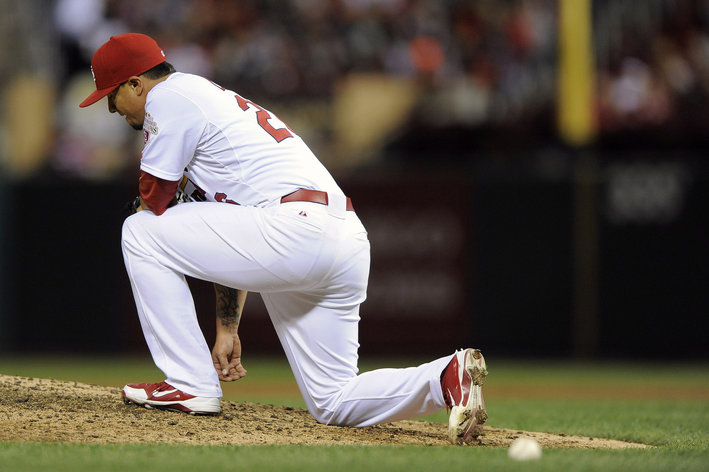 The end of Lohse-to-Texas rumors?...

Haudricourt believes that the Brewers would likely stand to benefit the most from signing the right-hander, and writes that Scott Boras has reminded owner Mark Attanasio of that fact on more than one occasion.

Beyond Yovani Gallardo and Marco Estrada, the Brew Crew have a lot of young and/or unproven starters set to take the hill. Mike Fiers, Chris Narveson, and Wily Peralta appear to be the top candidates to fill out the rotation, but Haudricourt spoke to scouts who believe that Milwaukee will not be competitive in the NL Central this year in they go forward with the pitching they have.

The main deterrent to signing Lohse for the Brewers -- despite the fact that he's still seeking a "big" three-year deal -- is that the team would have to part with the 17th overall pick in the upcoming draft. Things also didn't work out well for Milwaukee the last two times they doled out multi-year money to pitchers over 30 -- to Jeff Suppan and Randy Wolf -- so there may reservations there as well.

Lohse, 34, is coming off the best season of his career. The veteran right-hander posted a 2.86 ERA and 3.76 K/BB ratio in 211 innings over 33 starts for the Cardinals, but has been weighed down the qualifying offer that attached draft-pick compensation to his free agency.