San Diego Padres third baseman Chase Headley will miss at least the first few weeks of the season with a fractured left thumb.

UPDATE: Chase Headley has been diagnosed with a small fracture in his left thumb and could miss the first month of the season, reports Corey Brock of MLB.com.

The exact timing of Headley's return is still up in the air, but a four-week timetable is thought to be "optimistic," according to Bill Center of the San Diego Union-Tribune.

Headley sustained his thumb injury -- initially termed a jammed thumb -- while attempting to break up a double play during yesterday's spring training contest against the Los Angeles Angels. The third baseman singled in the first inning and went on to jam his thumb against second base when he slid into the bag.

After the game, manager Bud Black told reporters that Headley would undergo "X-rays and maybe some other scans" to help diagnose the severity of the injury. 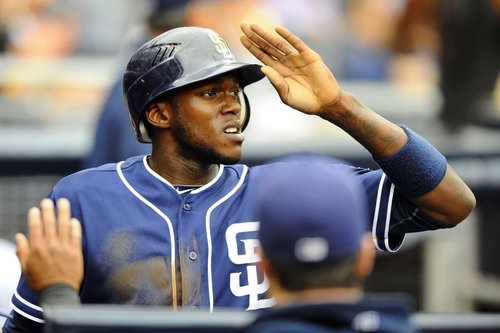 Catch up on all the latest news and rumors surrounding the Friars.

If Headley is forced to start the regular season on the disabled list, Brock expects the Padres to turn to either Logan Forsythe or top prospect Jedd Gyorko. Forsythe is close to returning to exhibition contests, but he's been sidelined with plantar fasciitis since March 7.