Chris Perez said his shoulder is 100 percent, and he expects to be ready for Opening Day.

Cleveland Indians closer Chris Perez told reporters, including Paul Hoynes of The Plain Dealer, that his shoulder is 100 percent, and he expects to be ready for Opening Day.

More Indians: An Indian will win the WBC

Perez said he expects to begin the season as the Indians' closer barring any unforeseen setback. He's recovering from a strained throwing shoulder that initially appeared to put his status for the start of the 2013 campaign in question.

However, Perez's recovery has gone well, as he threw his first full bullpen session yesterday, after logging a lesser initial session on Saturday. The right-hander threw all of his stuff and logged a total of 35 pitches. Following the session he feels he should be on Cleveland's active roster when they face the Toronto Blue Jays April 2. 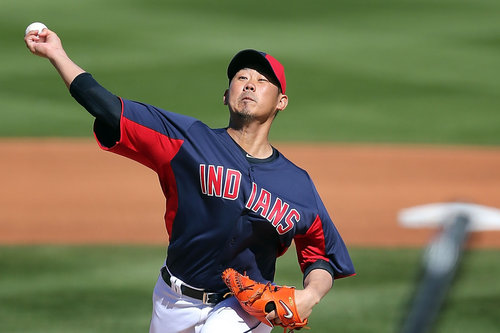 Matsuzaka will remain with the Indians after accepting a minor league assignment.

Perez doesn't believe it's "even a question" that he'll be available Opening Day. He said there is no pain at this point, but he acknowledged that "stuff can happen" between now and the start of the season. However, he told reporters that the initial shoulder strain is gone.

Perez has been the Indians' regular closer since 2010 after being acquired from the St. Louis Cardinals in the summer of 2009. Last season the 27-year-old maintained an ERA of 3.59 while compiling 39 saves. He owns a career ERA of 3.23 with a strikeout-to-walk ratio of 2.26 over five seasons in the majors.