The Nationals top prospect has been turning heads this spring, but Anthony Rendon is not going to be breaking camp with the big league club this season.

Share All sharing options for: Nationals' Anthony Rendon to start in minors

The Nationals top prospect, third baseman Anthony Rendon has impressed with his play at camp thus far, but he is not going to win a spot in the majors just yet, according to James Wagner of the Washington Post. When asked if there was a chance that Rendon would break camp with the Nationals manager Davey Johnson was clear, saying "No, he needs the reps, he needs to play."

The 22 year old has been excellent in spring training games to this point, going 5-12 with two doubles and a home run. 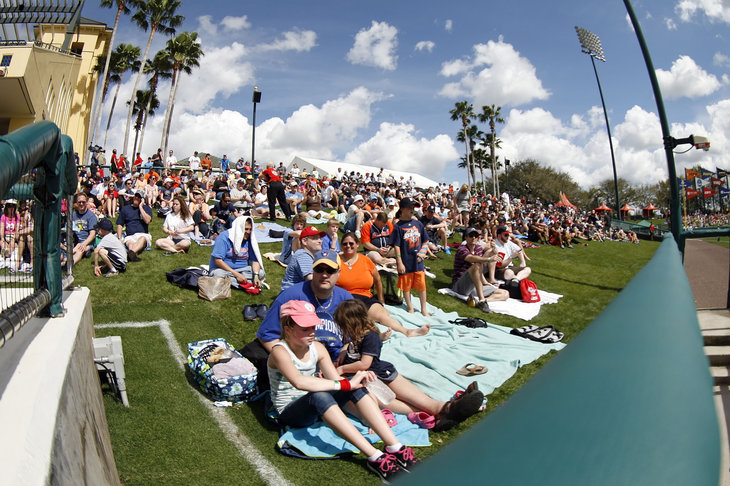 The Washington Nationals beat the Atlanta Braves 6-5 tonight after rallying in the eighth inning. Nats' outfielder Bryce Harper hit his first Grapefruit League home run and Jordan Zimmermann made his second start of the year, throwing 49 pitches in 3.0 IP in which he struck out four...

Rendon is currently the 30th ranked prospect in the game according to Baseball and he is tops among Nationals minor leaguers. Injuries have cut into his playing time severly, however.

He battled ankle injuries and a shoulder strain while playing in college. Last season, he fractured his left ankle and was limited to 43 games across four levels.

The injury did not have a major impact on his performance, however. In his first pro season, Rendon hit .233/.363/.489 across four levels and finished the season at AA Harrisburg.

Regular playing time is a must for Rendon now and he is not going to get that as a member of the Nationals big league club. However, his performance this spring is extremely encouraging. Nationals third baseman Ryan Zimmerman has had his own problems with injuries in recent years and Rendon could play an important role as the emergency option during the year. If not, a September call-up is a good bet, as long as Rendon stays healthy.