Colorado reportedly singed the Puerto Rican right-hander before his showing in the World Baseball Classic.

The Colorado Rockies signed right-hander Giancarlo Alvarado to a minor-league deal earlier this month, and he will join the club in camp now that the World Baseball Classic is over, reports Jon Morosi of FOX Sports.

More Rockies: Steady as a Rock

The 35-year-old Alvarado -- who goes by his middle name, Carlos, on his B-Ref page -- started three games for Puerto Rico in the WBC, including Tuesday night's final match against the Dominican Republic. The right-hander didn't have his best stuff in any of his three starts -- he lasted just an inning before getting the hook last night -- but he still finished the tournament with a 3.86 ERA and eight strikeouts in 9⅓ innings overall. 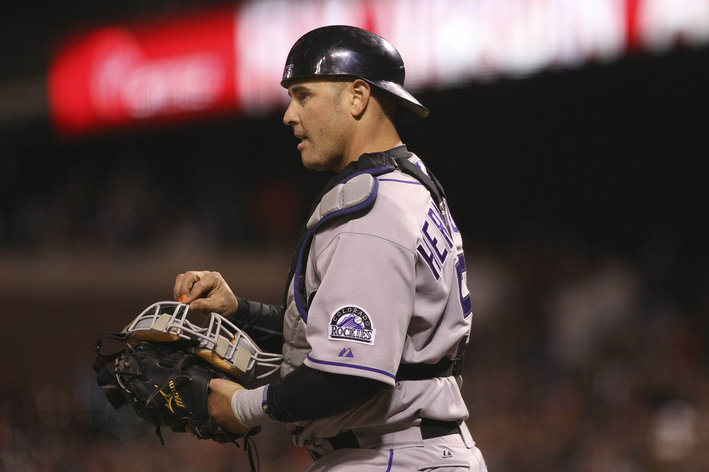 The Rockies' veteran backstop may be headed out of town before Opening Day.

Alvarado has 17 years professional ball under his belt, but has never cracked a big-league roster. He has significant time with MLB organizations, independent clubs, and Nippon Professional Baseball in Japan. The Puerto Rican right-hander started his pro career with the Pittsburgh Pirates, then jumped around to the Brewers, Tigers, Reds, Angels, and Dodgers -- with some indy ball in between -- never making it past Triple-A.

Alvarado spent the last three seasons in Japan with the Hiroshima Carp and Yokohama BayStars, amassing a 3.92 ERA and 9.7 K/9 rate in 39 innings over eight starts in 2012.